Review: A Night at the Tony’s 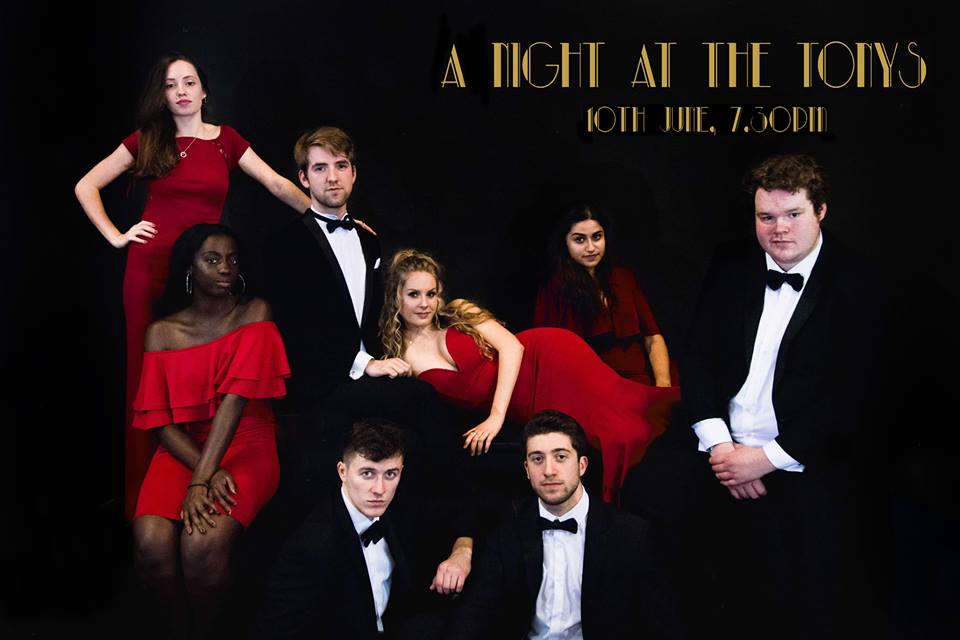 “…a fantastic one-off evening of live musical theatre and comedy.”

The scene was set for a glamorous evening, even before the show had begun, as audience members filed down the red carpet outside The Assembly Rooms Theatre, dressed in their very best black tie attire. Photographers snapped away both outside and inside the theatre, adding to the glitzy celebrity atmosphere of the evening. Despite feeling rather under-dressed, I couldn’t wait to see what Mary Lord and her team of cast and creatives had produced, as the Director’s Note promised ‘a night of excellent live theatre’ and ‘an electric atmosphere.’

I was not let down, as kicking off the proceedings, the show’s two hosts, Lily Edwards and Rosie Minnitt, proved they had the excellent comedic chemistry and timing to rival all other comic duos, as they introduced the audience to the first group to perform, Durham Improvised Musical. Having already garnered a glowing reputation through their performances as the ‘musical waiters’ at various university balls and events, DIM exceeded expectations and overcame all obstacles – mostly being the audience suggestions – to put on a hilarious piece of entirely improvised musical comedy. The audience were invited to provide a few prompts at the beginning to shape the content of the piece and DIM did the rest, taking obscure remarks such as ‘Who’s the Daddy?’ and turning them into a well performed – if not completely ludicrous – musical. This was all the more special for the fact that it was totally unique to that one performance and that the audience were witnessing a one-off piece that couldn’t be reproduced. Such is the nature of improvisation. There were slip ups, gaffs and cheesy puns, but it came together magically to showcase the astounding level of talent of the collective members of DIM, who were both comically and musically masterful. It really was quite hard to believe that they were literally making it up on the spot! Each member of DIM must be commended for their commitment to the piece and their sheer level of imagination.

After the interval, the audience was then treated to a musical mixture of Broadway hits, ranging from beloved classics such as ‘Bring Him Home’ from Les Misérables, to lesser known songs from shows like Heathers and Once. As a personal highlight, I was particularly blown away by Elliot Mather’s rendition of ‘Waving Through a Window’ from Dear Evan Hansen, which was powerful, emotive and beautifully executed. The songs performed were varied and wide and it demonstrated the different levels within the troupe, who all proved they could deliver wildly energetic ensemble pieces, moving duologues and even a rousing quartet number.

From a musical standpoint, the standard was incredibly high, from the incredible voices that were showcased onstage to the endless talent of the band in the pit below, who had to keep time and improvise a score to the DIM antics, but also provide musical accompaniment to the Broadway hits. The band, headed by conductor Rhys Rodrigues, should be praised for their flawless execution of each number and their tenacity – performing in black tie under hot lights for all that time must not be easy!

My criticisms, although small, must be directed at the tech team. During DIM’s performance, there was the occasional sound effect, which although added largely to the humour, was often a bit too loud and seemed out of place, mostly due to how infrequent they were. At times, the lighting also seemed misplaced, with the lights behind the actors onstage shining a little too brightly to be comfortable. Aside from strange lighting choices, there were also a few slip ups, where lights were turned off too quickly on performers, cutting their numbers short, or meaning they could still be seen as they went offstage. However, for the most part the lighting was used to good effect.

The audience were given what was promised by Mary Lord and her team – a fantastic one-off evening of live musical theatre and comedy. Every single individual involved pulled together and their combined talents shone through in what was a truly entertaining evening. I can only say that it’s a shame that this marvellous production does not run for a longer period, so that more people can enjoy and marvel at the some of the incredible student talent that Durham has to offer.