Andrew Macfarlane in Drama on 1 November, 2010. 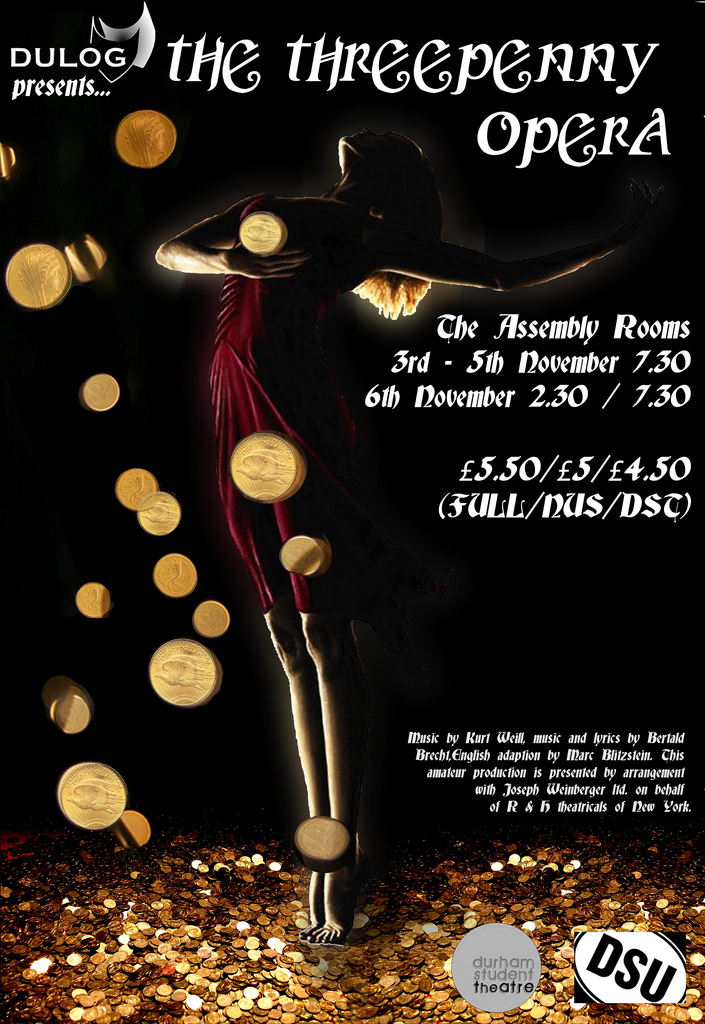 “This is no ordinary musical”

DULOG return to the Assembly Rooms this term with a production of the classic The Threepenny Opera. Almost universally described by the cast and production team as “unique and different”, one thing is certain from the start: this is no ordinary musical.

The Threepenny Opera was written by Kurt Weill and Bertolt Brecht, both towering figures in the German artistic canon. Brecht was clearly influenced by Marxist ideology and would later go on to fully support communism. Adapted from the eighteenth-century The Beggar’s Opera by John Gay, The Threepenny Opera shows the underworld of society, full of scoundrels, whores and villains. The story follows Macheath (many students will be familiar with the song “Mack the Knife”, his introductory song) and his marriage to Polly Peachum. Polly’s father, who controls all the beggars, is most displeased by this arrangement and threatens to have Macheath hanged so that Polly can be a widow. Brecht’s work offers a deeply critical view of modern capitalism and is still very relevant today.

This production is being directed by Jonnie Grande who achieved success last term with DULOG’s production of A Chorus Line. He was originally interested in the work because of its extraordinary structure; he claims it is neither an opera nor a piece of musical theatre and stands very much apart from other musicals seen in Durham recently. Jonnie is very clear that he wishes to keep Brecht’s socio-economic commentary at the forefront of the show, but believes that it is still relevant in today’s society. Originally intended to be set in 1837, the production team have decided to place the story in an ambiguous, modern time period to reflect this. It seems quite fitting that given the recent economic turmoil, questions about the benefits of capitalism be raised on the stage.

One of the most striking elements of the show is that everything is monochrome. As Jonnie explains, this is very much in keeping with Brecht’s views on theatre, in which he was keen that actors be very aware that they are representing someone else; he was a fierce opponent of Stanislavski and hated method acting of any sort. The black and white colours give the production a dream-like quality; this is certainly not a piece of realism theatre. Another interesting feature of the show is the way that the songs interact with the action. Again, Brecht shows his vision that would go on to influence future shows like Cabaret. He strongly disliked the idea of actors moving from talking to singing apparently without realising as occurred in many operas and so made the songs in The Threepenny Opera very much separate. They do not relate directly to the action, but offer more of a commentary on the drama and are often physically separate to the action on stage.

Another key element to this show is the choreography. Madeleine Mutch, who choreographed West Side Story in the Gala earlier this year, returns to the Assembly Rooms faced with an altogether different challenge. It is clear right from the start of the show that the main influence is the 1920s, something Madeleine admits she has never tried before, thus being a testament to her own abilities that she has been so successful with her ideas. With almost no written or visual instruction, she has come up with entirely original, exciting routines for the songs. The influence of Bob Fosse, the great Broadway choreographer, is obvious, perhaps nowhere more so than in “Barbara Song” where four girls perform a dance on chairs.

One of the main reasons for seeing the show, according to Jonnie, is to see the prestigious talent on offer. He admits to being overwhelmed by the numbers of exceptional people who auditioned and was particularly impressed by the freshers who tried out. The leads are particularly impressive. Rebecca Collingwood, who played the lead in West Side Story, is Polly Peachum, a strong and gutsy girl who also shows moments of sweetness and naivety. She claims that one of the main challenges facing the cast was the nature of the music. Often chromatic and disjointed it poses problems to even the most experienced of singers. Guy Hughes, the lead in DULOG’s The Wild Party, performs as Mr Peachum, the boss of London’s beggars, a business-savvy man with a manipulative mind. He notes how well the cast have performed given the short amount of rehearsal time they have had. Kate Hunter, another lead in The Wild Party plays Mrs Peachum, and Andy Kempster, a post-graduate student previously heavily involved with Newcastle University Theatre Society, takes the role of Mack the Knife. According to the director, it is one of the strongest casts he has ever seen in a Durham production.

The music poses real challenges to the cast and band, but it is under the capable control of Seth Miall who musical directed 42nd Street earlier this year at Hild Bede. He is aided by Florian Cooper, a very talented musician in his own right, and together they have created a fantastic musical landscape for the show.

The Threepenny Opera clearly holds a unique position in the musical theatre canon and this production looks set to do justice to the genius minds of Brecht and Weill. It is visually arresting, political, relevant, and simply enjoyable to watch. Most of all, however, to quote Jonnie, it “will provoke questions people may not want to ask”. Any musical that can do that is certainly worth anyone’s attention.

The Threepenny Opera opens on Wednesday and runs until Saturday in the Assembly Rooms. 7.30 pm (Saturday matinée, 2.30 pm)