Preview: The Taming of the Shrew 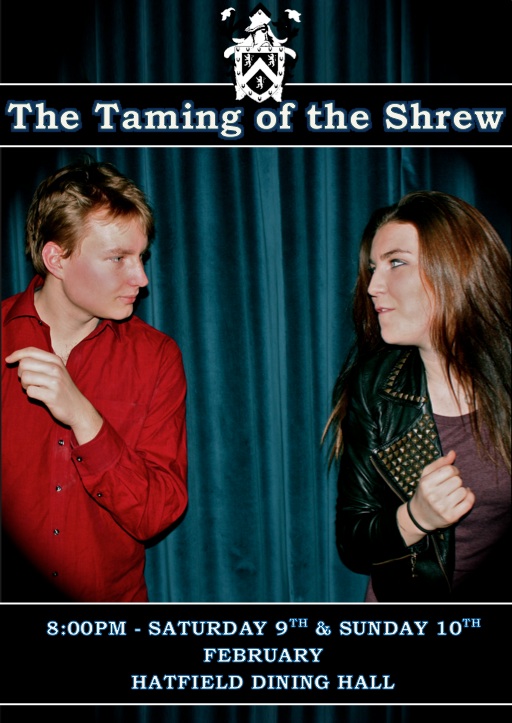 Two sisters battle for love in this modern adaptation

The Taming of the Shrew is a light-hearted Shakespearean comedy which focuses on a pair of sisters, Katherine and Bianca, who are being courted by various suitors. It also discusses deeper themes such as the role of women in society and marriage. A student production supported by The Lion Theatre Company is adding their own modern-day spin, which is being performed in Hatfield College Dining Hall this weekend. Ben Williams meets directors Laura Clifford and Steph Lam, and actor Anna Hogarth.

Ben Williams: Of all of Shakespeare’s play, why did you choose ‘The Taming of the Shrew’?

Laura Clifford & Steph Lam: To be honest, it was inspired by another production which I felt really made Shakespeare relevant by bringing out both the language and the comedy. It felt as though it was staying true to the text. I think that with Shakespeare it’s all about the interpretation, The Globe even put on an all-female production at one point, but that’s not what we’re trying to do here. We’re not trying to make a controversial point; we’re trying to make the text relevant.

BW: ‘The Taming of the Shrew’ has been famously adapted for modern times, with examples being ‘Kiss Me, Kate’ and ’10 Things I Hate About You’. What are you doing with your production to make it different?

LC & SL: As well as using a contemporary setting, we’ve also altered the balance of the themes. We’re not putting so much focus on the themes of male dominance and women being married off, instead we are playing more to the ideas of favouritism, sibling rivalry and hot-headed relationships which are more appropriate to modern times.

BW: What are the benefits of performing in Hatfield College dining hall?

LC & SL: The dining hall was mainly picked due to the budget and practicality. The dining hall offers lighting facilities which wouldn’t be possible in the chapel, for example. It’s a really central space too, if people see a stage being set up, it’ll become more of a talking point. Also we’re lacking in the arts at Hatfield and hopefully the publicity which comes with such a central location will encourage greater participation.

BW: Have you faced any issues throughout the rehearsal process?

LC & SL: Publicity issues and Elvet Riverside being closed did leave us with a limited cast and rehearsal space at first. We particularly had a problem getting enough male actors, which is even more important in Shakespeare, where many of the plays are very male-heavy. But it’s testament to the cast that it’s come together. They’ve been brilliant, especially when it came to things like learning lines. It’s great to have a set of actors who all come prepared!

BW: What have you done about costumes in the play?

LC & SL: Obviously we can’t give the game away, but as we’ve set the play in modern times the costumes are quite modern. Although this actually turned out being more of a problem, as modern clothes are more easily judged and easier to get wrong. I would say it’s more stylised than normal clothes, which is useful as a dramatic device, for example demonstrating Baptista’s materialism and reaping the rewards of her daughters’ potential suitors. In the case of the wedding scene, we’ve tried to focus more on characterisation to bring out the comedy.

BW: At the end of the play Katherine has a famous speech about why wives should always obey their husbands. How did you go about approaching that from a modern day perspective?

Anna Hogarth: We’ve thought a lot about what the real relationship between Katherine and Petruchio is. In modern terms I think they’re more like one of those modern couples who love to hate each other than stuck in a male dominated relationship. With her final speech, we’ve approached it quite sarcastically, but there’s more to it than that. It’s very subtle in that we’re trying to establish that Katherine is agreeing to play along with the idea of the dutiful wife, so as not to disrupt his image ‘’with the lads’’ but the sarcasm is there to underline that Katherine knows that she is still in control.

The Taming of the Shrew is showing on Saturday 9th and Sunday 10th February, from 8pm in Hatfield Dining Hall. Tickets available online: dur.ac.uk/dst/show.php?show=1026