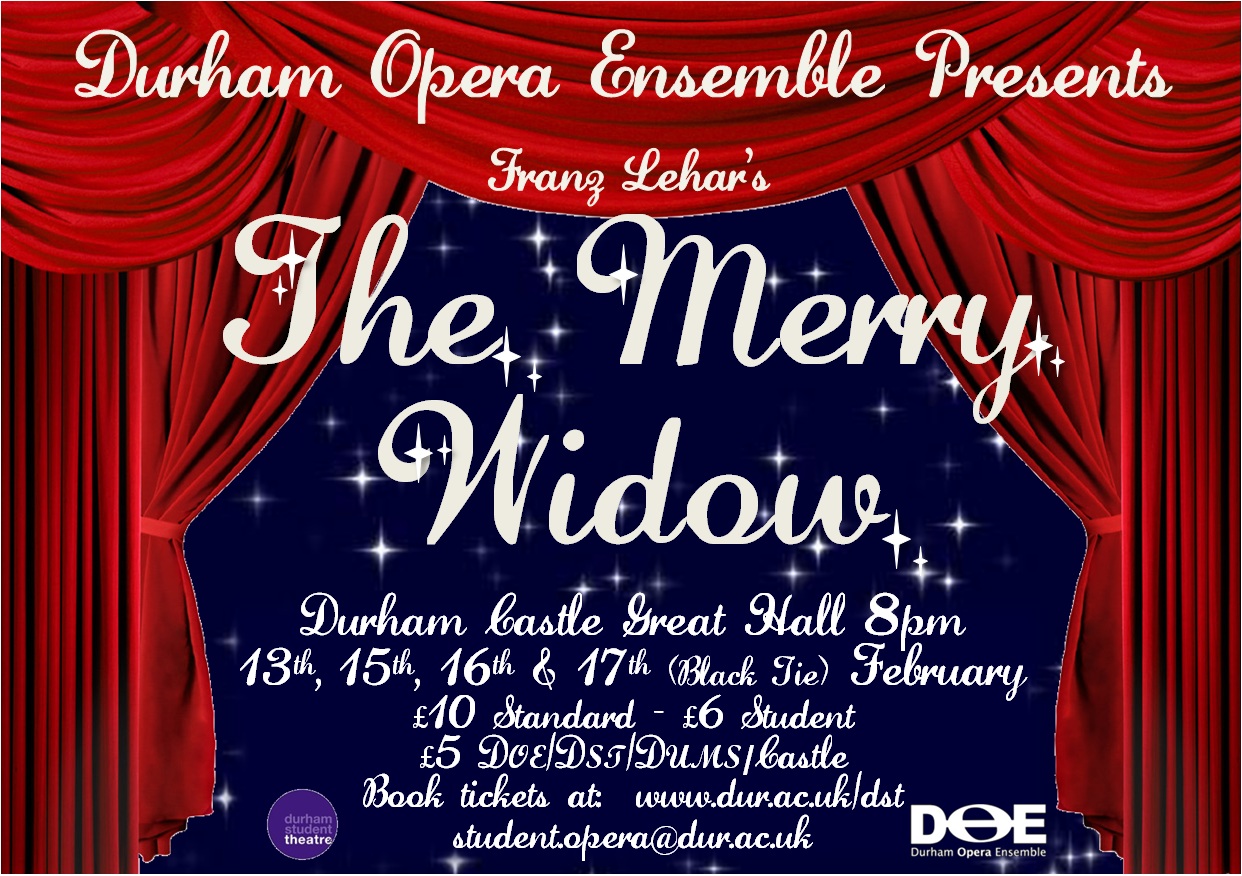 This February, Durham Opera Ensemble is staging Franz Lehár’s The Merry Widow, sometimes seen as Vienna’s definitive romantic operetta, and certainly one of Europe’s best-loved since its 1905 debut. With India Furse, Matthew Howes and Dave Collins at the helm, as Director, Musical Director and Producer respectively, this lively, colourful story of flirtation and intrigue entertains and engages in equal measure. The Bubble got a sneak preview, followed by an exclusive chat with the director.

The Bubble: To start with, could you give a quick summary of The Merry Widow.

India Furse: It’s set in 1905 Paris, in the Pontevedrian embassy, Pontevedro being a fake Eastern European principality on the brink of bankruptcy, which they’re all very patriotic about. The state’s wealthiest widow is looking to marry, and her countrymen are all trying to ensure she chooses one of them, so that her assets will stay in Pontevedro. Meanwhile her old love interest the Count is back on the scene, and the action really centres on their relationship and whether they’ll get back together, as well as the various affairs and misdeeds of the rest of the cast. It’s all very comic and fast-paced.

TB: Why have you chosen to perform The Merry Widow?

IF: There were quite a few reasons… It’s a very popular operetta, but it’s not really performed by students very often because vocally it’s quite difficult, which can put off musical theatre groups, but the spoken dialogue makes it a challenge for student opera ensembles too. It’s got a large chorus which is ideal because as it’s our biggest show we like to have a large cast; it’s always fun to get as many people as possible involved. Also the music’s obviously really lovely, and as a whole it’s so light-hearted that it’s something that you can’t help but go along with and enjoy.

TB: Would you say it’s still accessible to people who haven’t seen opera before?

IF: Definitely, I’d say it’s one of the most accessible of its kind; because it’s an operetta it’s a good entry-point into opera for those who maybe haven’t enjoyed it before. The music’s very listenable, and as we’re performing in English with all the spoken dialogue as well, it’s very easy to follow; it’s a good half-way point between the two.

TB: Have you had any challenges or setbacks along the way?

IF: I suppose the biggest challenge is working with such a large cast, around 25 performers. The cast have a real mix of specialities, for example the majority of the chorus didn’t have any previous dancing experience, so that’s required some work. We work with a lot of choral singers, who are used to singing in chapel choirs and that kind of thing; it’s really great for them to get an opportunity to perform on stage because it’s completely different. Lots of the cast also weren’t used to doing spoken stuff; it’s a question of integrating the music and the acting smoothly and giving them equal attention.

TB: What, if anything, would you say separates this production from those before it?

IF: The opportunity to stage it in the Castle is one obvious change which really adds to the experience; as a setting it’s so appropriate and it captures the glamour and formality of the period really well, particularly for anyone who chooses to come on black tie night. Our production has also been modernised slightly in that we’re using the most recent 2008 English translation by Jeremy Sams; it’s a very fun, accessible version of the original, with quite a lot of bawdy jokes which are more possible with a modern audience.

TB: Did you find casting difficult?

IF: It’s difficult because there are so many talented people who turn up, when you have about 40 sopranos who come and audition it can be so hard to choose one single lead. But in the end there’s always someone who stands out, and has that special spark. With opera it’s a lot to do with the practicalities, and having a mature voice; it’s much more difficult if you’re a younger singer. The lead parts just stood out for us to be honest, it was relatively easy to choose.

TB: Which characters are you most drawn to?

IF: Possibly the character of Valencienne, the second female lead. She’s the Ambassador’s wife, but at the same time she’s having a pretty serious flirtation with Count Camille, who’s very in love with her. She’s torn between being a respectable wife and being quite cheeky and flirtatious and naughty, which makes her a very lively stage presence. They have three big love duets, so they’re given nearly as much attention as Hanna [the widow] and Danilo [her love interest].

TB: Given that The Merry Widow is now over one hundred years old, what would you say is its enduring appeal?

IF: I think early 1900s Europe is an appealing era for modern audiences; it’s seen as a flamboyant, extravagant time, with lots of big parties, a bit of a contrast with recession Europe today. Our costume designers [Clare Lichfield and Sally Furse] have made these amazing colourful period dresses and it really takes you back to that pre-war era; it’s a form of escapism in that sense. Also music like Lehár’s is timeless; it can’t fail to draw you in.

The Merry Widow by Durham Opera Ensemble will be showing in Castle Great Hall on the 13th and 15th-17th of February at 8.00pm.