Preview of Haya and Jamil: An interview with Director Phillipe Bosher 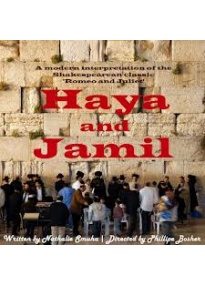 ‘Romeo and Juliet’ is transformed into something new.

What inspired the original idea to rework Shakespeare’s Romeo and Juliet in a Israeli/Palestinian setting?

The script was originally written in Dutch by an Erasmus student Nathalie Sumha, who has family from Jerusalem. The current conflict going on in Jerusalem between Israelis and Palestinians makes it a worthwhile context to stage the Montague/Capulet fight, which I think works really well. Nathalie translated the script herself, with help from both me and Durham Student Theatre.

The conflict revolves around the religious divide between Israel and Palestine, a factor which isn’t present in Shakespeare’s text, how has that been incorporated?

The families come from either side of the conflict and it plays a large role. Our lead character Jamil (the Romeo counterpart) talks about getting past the differences, whereas the older generations are really stuck in their ways. There are some controversial moments, with anti-Semitic references, but I must stress that these characters are based on extremists this part of the world. In fact, some characters are Hamas members.

To what extent has the original text been changed?

It’s a completely new script, but the original plot is still intact. You still have all of the characters; we even have the Paris equivalent. The ending is different, not in that Romeo and Juliet survive, it’s still a tragedy, but the ending is slightly different so that it skews the meaning of the play. I believe that almost every scene is still in this play, it’s just that it’s shorter because we don’t have the Shakespearean dialogue.

Is this your first experience at the Durham Drama Festival?

Yes, in fact my only acting experience comes from a year six play. I’ve always enjoyed the look of a student theatre scene. But it’s always been one of those things that looks really hard to get into. Although when someone suggested that I direct Haya and Jamil, I discovered a really lovely group of people who love what they do.

How did you approach the rehearsal process, particularly developing characters when, perhaps, Durham students have limited experience in the conflict?

I think that the script is quite explicit in how the characters are to be portrayed and how the characters’ beliefs affect their actions. So, as a director, I’ve tried to focus not only on the differences with the Durham culture, but perhaps more on the similarities. With characters like Haya and Jamil, the main thing which I asked them to focus on was the emotional content of the script. You don’t need to be Jewish or Muslim to understand the motivations behind the final death scene, for example.

What would you say are the key aims of your production?

I think largely my aim is to create a fun experience. It’s to have something that people can watch and be affected by. I don’t want to spoil anything, but the very end of the play is a newsreel. The way in which it has been structured and presented means it’s designed to make you think about what the media isn’t telling you. How the media can manage to take 90 minutes, where a couple meet, fall in love, marry and die, and then sum it up in 60 seconds. Obviously that’s jarring. I feel that people can come out of the show and say ‘I really wonder what the news isn’t telling me’, ‘I really wonder what the stories are behind the people out their dying for their belief’.

What have you done about the set?

My main aim was to make it as realistic as possible. We have over twenty people in the production crew, who have all been brilliant. The cast is fifteen strong, so that’s seven or eight times bigger than some of the other DDF productions! We’ve tried to make it so nothing looks out of place, having the right religious props for each scene was particularly important.

How have you found both directing and appearing in the play?

It’s difficult. Thankfully my part is small, so I can focus on directing. With the scenes which I am in, I normally ask the actors to act as though I’m in a particular position onstage. And then watch it as a director before putting myself in. I think a good director has a vision, but he allows his actors to interpret the vision as they see fit. The actors take something a little bit different from each rehearsal and they react well to the differences. That’s the best thing about good cast.

The D’Olivier awards are also taking place on Saturday, who do you have tipped?

Of course I’m biased so I’d say my leading couple for best actor and actress. But seriously, if there were an award for hardest worker, I’d have to say Izzie Price, she’s just finished appearing in Castle’s [Castle Theatre Company] production of Romeo and Juliet, she’s appearing in Haya and Jamil, she’s also in We All Fall Down and auditioning for countless other things. If it were the award for best newcomer, I think that Michelle Novella, who has a smaller part in our production, has done really brilliantly. The DDF is showing really varied productions, ours is naturalistic, Charles on Charles Bridge is an intimate play, and We All Fall Down. On the whole, I hope that the D’Olivier awards really show that fact off.