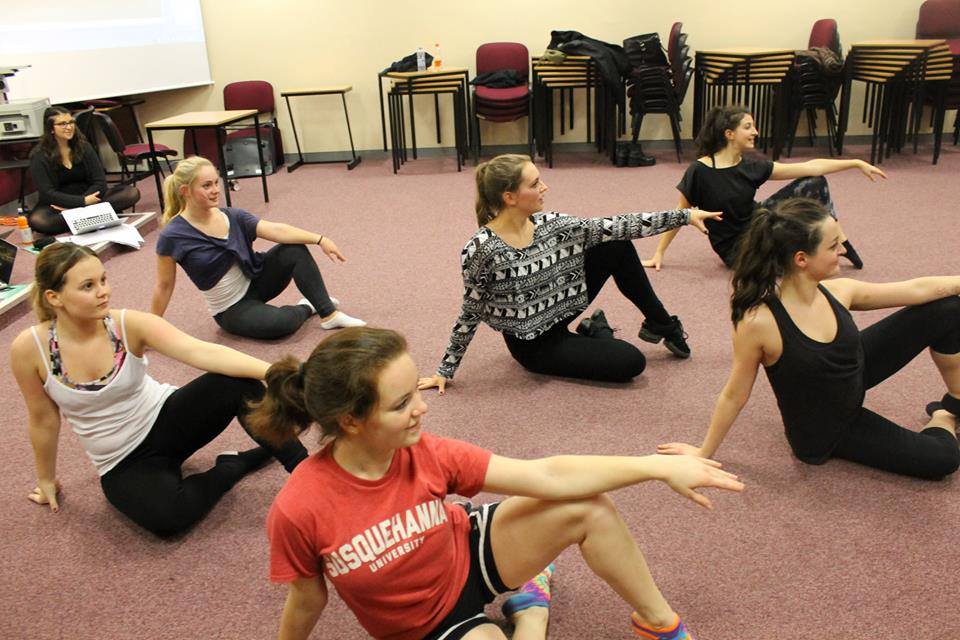 The ‘Kiss Me, Kate’ cast in rehearsals

Being a big fan of director Kate Barton’s previous work in Durham (The Elephant Man, Motherland and The Boy George to name a few) I was curious to find out how she was approaching her latest effort ‒ DULOG’s Kiss Me, Kate in the Gala Theatre. Having asked her how hard the leap was from doing intense, chilling dramas to a big ensemble musical comedy, Kate was thrilled at the change: “Some of the plays I’ve done in the past have had funny moments, but obviously one of the main aims has been to have the audience leaving with tears in their eyes. But I relish the chance to do something different.” The consensus from the whole cast was that the show was going exactly the way intended. “Anyway, I’ve always maintained that if I do something that is clearly rubbish, I’ll just change it.”

I next asked on behalf of the DULOG Exec what the reason behind choosing this particular musical was.

Charlie Keeble (Fred): To be brutally honest it wasn’t the obvious choice for DULOG. We all knew its name and knew the big numbers from it, but when we started assessing how suitable for a Gala show it was, it became apparent that it was perfect. The music is absolutely fantastic and the dance numbers are thrilling.

Sorrel Brown (Lilli): Also I think the Shakespearean elements to it make it such an attraction. [Kiss Me, Kate is partially based on William Shakespeare’s The Taming of the Shrew]

Assistant Director Ellie Jones nodded in agreement, adding: “This year has definitely been very inclusive. We have so many cast members who have never even done a DULOG show before.”

I similarly asked the cast what attracted them for auditioning for Kiss Me, Kate.

Sorrel Brown: I think mainly the songs. I was a huge fan of the musical before it was announced and so I was so excited when it was confirmed as the Gala show. They’re not only beautiful, but also so challenging and fantastic for showcasing talent.

Charlie Keeble: There are so many different styles in the songs too. There are elements of jazz and opera, alongside the type of songs you might be expecting to hear. Also because you have the whole ‘play within a play’ aspects of the show, it is actually incredibly funny. It should appeal to all.

Kate Barton adds: “What is funny is that because a lot of it is a ‘play within a play’ we’ve added in a lot of mistakes for the play that the actors are trying to put on. I think this is a great opportunity to make it clear that the obvious mistakes that happen on stage are meant to be there, it’s not us going for the D’Oscar for Best Onstage Mistake.”

At the beginning of what promises to be a fantastic term for DST, I concluded by asking why people should come and see this show in particular. “This show is going to be an absolute spectacle,” replied Charlie Keeble. Dominic McGovern (Gangster) agreed and added, “I don’t want to say it’ll be something to marvel at because it’ll seem like I’m really over exaggerating, but a show of this size on a stage this big is going to be good,” which was met with laughter all around. Sorrel Brown concluded, “I think it’s the closest you will get to a professional musical in DST.”