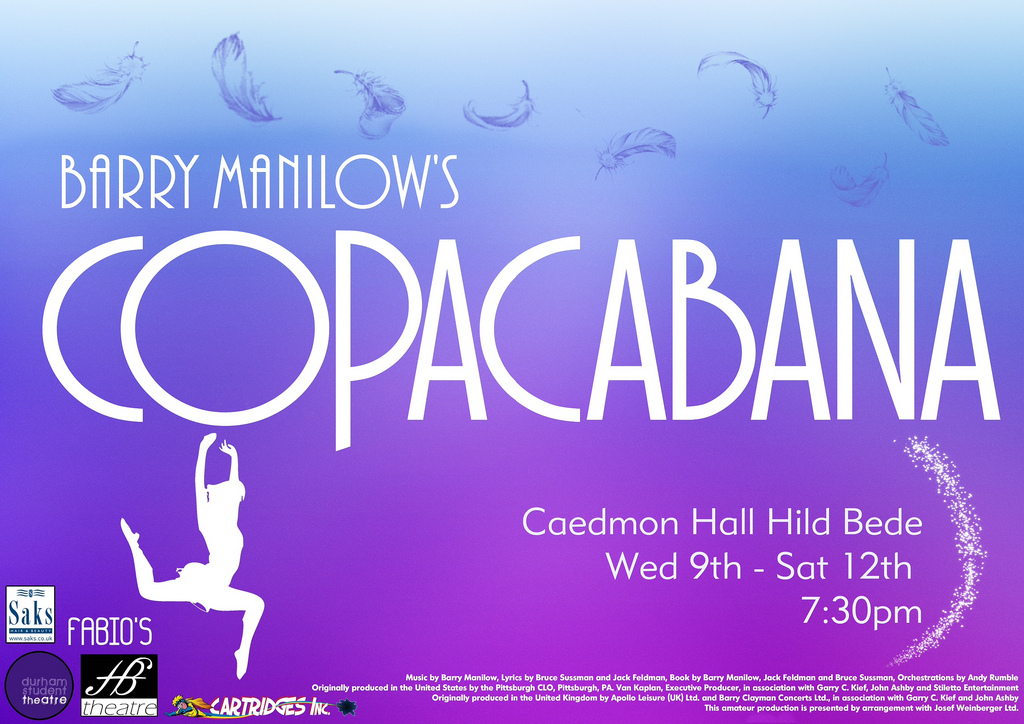 This week, Hild Bede Theatre pulls out all the stops with Barry Manilow’s much loved musical

Okay everyone, it’s time to crack out the samba moves, as Hild Bede Theatre takes us back to 1940s New York in Barry Manilow’s classic musical Copacabana! Through the mediums of song, dance and A LOT of feathers, the cast and crew will be bringing back to life the vibrant 1994 stage musical, based on Manilow’s most successful single ever, which you can check out from this Wednesday until Saturday at 7.30 in Hild Bede’s Caedmon Hall. And this is a show you will not want to miss. By the look of the rehearsals, this looks set to be one of the most spectacular theatrical productions in Durham this year….

Even if you’re not familiar with the story, you probably know the song (very possibly from Rachel’s famous rendition in Friends), and its inevitable associations of glittering showgirls, tropical rhythms and steamy passions. The story takes us through the daydreams of young songwriter Stephen as he plans what he hopes will be a hit musical, following the ambitions and fortunes of young singer Lola La Mar as she arrives in New York and starts work as a Copa girl at the famous Copacabana nightclub. Stephen reincarnates himself in the musical as barman and songwriter Tony Starr and the two quickly fall in love. However, their idyllic new romance is soon threatened by the sinister Italian gangster Rico who instantly sees Lola’s potential and determines to take her back to his own nightclub in Havana.

Clearly there is going to be a lot to coordinate – singers, dancers, technical effects… Speaking to Director Jonnie Grande and Producer Sarah Peters about running such a complex production, they both agreed it was the biggest show Hild Bede had put on in the last four years. Grande admits “there’s just so much going on in this show – so much singing and dancing, but these are the major draws of the show, and it’s going to look fantastic when it’s performed to an audience. Also, surprisingly this is one of the first shows where we’re actually running ahead of schedule!” Grande aims to keep faithful to the original feel of the stage show and go all out. He notes the show’s numerous draws. “It’s got it all – incredible music: big numbers, great ballads as well as the saucy Latin stuff, and we’ve got so many amazing singers and dancers, so we were really able to go to town with it.” Peters agrees; “It’s such a great show already, why change what works?”

Looking at the work of the stage crew, a lot of time and effort has gone into this show. Peters is not shy in her praise of the production team. “I’m not joking,” she states, “when you walk in from the foyer, you will be transported into another world. We have an amazing team on lights and stage so we can get some really awesome effects going on.” She notes the show’s new glaciator, which conveniently starts billowing clouds of white frothy smoke as we speak. “It’s perfect,” she says, “The show is about a dream, so we can really have a good time on the whole production and make the show numbers absolutely incredible. There’s no need to make it resemble real life. We can make it as colourful and as energetic as we like!”

Now I know that a lot of you have never considered making the “massive trek” to Hild Bede to see anything, but having made this “trek”, I can safely say that it is no more than a five minute walk from town. And I know Grande is the director, and therefore very biased, but he is adamant that even you far-off hill colleges will regret it if you don’t come. “The music has been in my head permanently for the last few weeks and we have unbelievable amounts of talent. We’ve had to rework songs originally for the six main leads to give about fifteen different people solos because we’ve got such a profusion of talent!” Peters urges everyone who has never been to a Hild Bede production to “try something new! We have the second-biggest theatre in Durham, the best theatrical effects.” This is a rare opportunity to see everything utilised to its highest potential in such a well-known and well-loved musical. “It’s going to be really beautiful” she states, gesturing towards the stage. “Everything will look incredible. People should definitely come and see it! Come down and have a Copa cocktail in the bar, soak up the atmosphere and just enjoy the show! It’s a big show, in a big theatre, for a small price!” What’s not to love?

Bursting with an obscene number of catchy songs you won’t be able to get out of your head for weeks afterwards, this musical simply refuses to slow down for a moment. What with the recent overwhelming amount of darker, bleaker Durham plays, among them Endgame and DNA, Copacabana, with its vibrancy and colour, positively rebels against such a depressing outlook. In fact, as the nights get shorter and the days get sunnier, I, for one, am not in the mood to face much more gloom. Okay, so maybe I’m secretly a musical-lover, but the incredible talent, stunning costumes, spectacular choreography, sensational production, and unashamed joie de vivre of this production are, quite simply, breathtaking. It seems to me that Copacabana is the little spark of joy Durham drama needs right now. And if that doesn’t sell you, you have a heart of stone. As Peters aptly puts it, “who doesn’t love Barry Manilow?!”