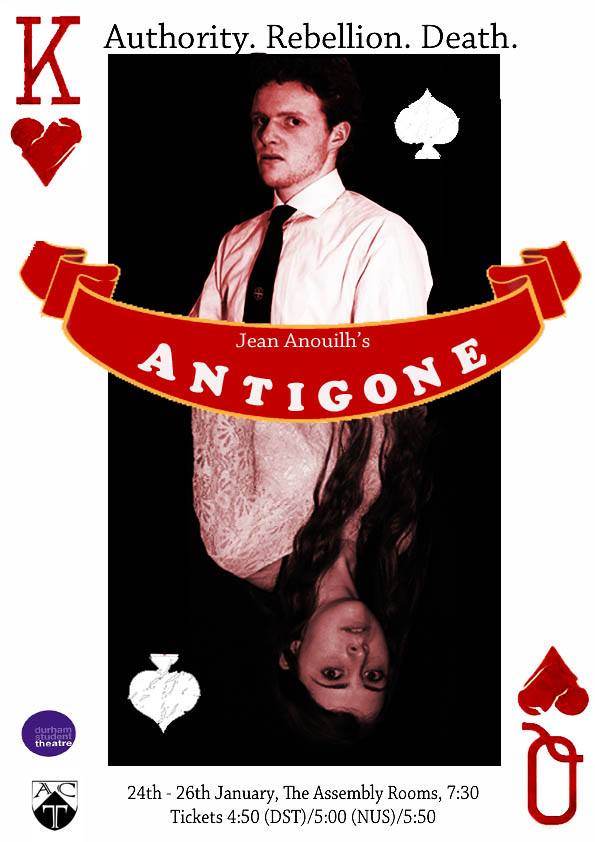 This term, Aidan’s College Theatre tackles a 1940s French interpretation of a Greek classic. Under the directorship of Justin Murray, Jean Anouilh’s Antigone is brought to life and raises questions about the political situation of modern humanity. The Bubble gets an exclusive chat with the director.

The Bubble: Firstly, what is Antigone about?

Justin Murray: Antigone is about a girl who dares to bury her brother, against the orders of her uncle Creon, the King of Thebes. The confrontation between these two irreconcilable, opposing forces will, in different ways, cause both their lives to implode.

TB: Tell us about the adaptation you’ve been using.

JM: The version we’re using was written by a French playwright called Jean Anouilh. Here’s where it gets interesting: Anouilh wrote his adaptation of the piece (in many ways a reflection on the nature of authority and rebellion) in Paris in 1944 – under Nazi censorship. If he writes the wrong thing, he dies. So he’s very careful about preserving a beautiful equilibrium of ambiguity between Antigone’s side of the story and Creon’s – but that doesn’t mean you can’t hear shades of both the French Resistance and the Vichy collaborators in the text. However, the very first stage direction is ‘Set without historical or geographical implications’ – Anouilh isn’t using the Antigone myth the way Orwell uses a farm full of animals, he’s aiming for something more universal.

TB: Why have you chosen to perform Antigone?

JM: I chose Antigone because I fell in love with the text the moment I read it. Shivers down my spine from page one. The prose is beautiful, and (as a Classicist) I loved the idea of doing a Classical play that preserved the original source material whilst still being relevant to the modern world- and this version trod that tightrope perfectly.

TB: Why is Antigone relevant to a modern day audience?

JM: Because the story of the ethics of civil disobedience is relevant to anyone living under a government which keeps secrets from its public – as every Western government today does. There’s a half-hour interrogation sequence between Creon and Antigone right at the centre of the play which picks apart everything to do with this theme in an extremely intense and involving way. But Antigone’s vendetta is so irrational that she also recalls the shadow of 21st century fundamentalism – bringing a new spin to the old ‘one man’s terrorist is another man’s freedom fighter’ adage. The Anouilh adaptation also takes human happiness, and the search for it, as one of its main themes, and this makes it relevant to any human being at any time in history.

TB: What have been the challenges of the production?

JM: I’ve enjoyed rising to the challenge of incorporating the character of the Chorus. Anouilh’s Chorus isn’t quite like any other – he seems to take the figure of a narrator, a philosopher, and a symbol of Fate all at the same time. But I’m rather pleased with the shape that the Chorus has taken on across the rehearsal period.

In Classical plays all deaths, action sequences (essentially, all the cool stuff) never happens onstage – it’s usually narrated by messengers or bystanders. To a modern audience, accustomed to all sorts of violence and gore, this jars slightly. To get round the problem I chose to recreate these sequences onstage in a physical way, as if they’re memories in the characters’ minds.

TB: How have you taken advantage of modern theatrical capabilities, such as lighting and sound, to enhance the script?

JM: We’ve been experimenting a lot with low-lighting scenes as much as possible – washing the stage out with light is overdone and frankly boring. Lots of candles. Art direction has also been pretty key in this one. Think playing cards. A lot of playing cards. Also lots of shadows and silhouettes. (But no more spoilers…!)

TB: In your opinion, which characters are the most interesting and why?

JM: It’s got to be Antigone and Creon equally – the text makes you sympathise and vilify both of them simultaneously. I love Antigone because of her flat refusal to compromise on her principles, even in the face of death. I also love Creon because it’s easier to relate to him than Antigone – in many ways, he does what any of us would have done, and his tragedy is that his choices have horrific consequences…

TB: What will this production do for the audience?

Antigone by Aidan’s College Theatre is showing at the Assembly Rooms from 24th to 26th January, at 7.30pm. Tickets are available from dur.ac.uk/dst/