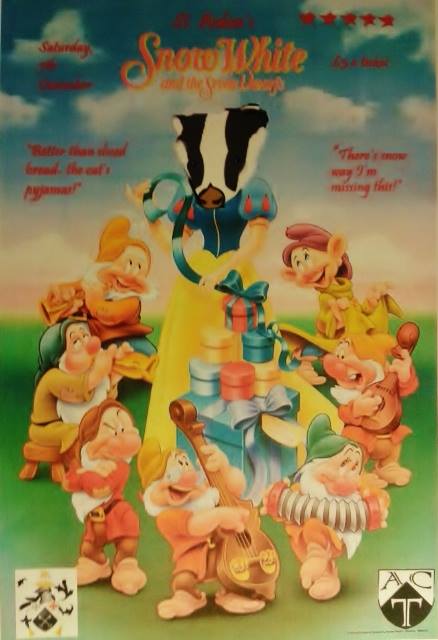 a modern adaptation of a fairytale classic

What is your role within the production?

Well, in Aidan’s College Theatre (ACT) it’s tradition that the drama coordinator writes the pantomime themselves. So, as this year’s drama coordinator, I’ve been given that task as well as directing alongside Anoushka Patel.

How did you approach the writing process?

In previous years, we’ve enjoyed Cinderella and Aladdin, and so I decided to stick to a traditional fairytale theme, choosing Snow White. The story was ideal as it already has a lot of characters and there are a lot of opportunities to play around with the storyline. I then set about writing the script, something I’ve ever done before, and, with a lot of help from friends, the script was ready in a couple of weeks. My aim was to make it a modern day Snow White. So the apple is now a mac and we’ve included a lot of hashtagging to bring it up to date. We’ve also drawn a lot of different fairytale characters into the script; we’ve managed to include Little Red Riding Hood, Goldilocks and even Superman. So it’s a little different to your normal Snow White.

How have rehearsals been going?

Since the first rehearsal the script has changed a great deal. I did say at the start that my script was loosely based on Snow White and I would like the performers to make their performance loosely based on my script. There’s been a lot of improvisation and collaboration involved.

How did you find the casting process?

Well, the auditions were open to everyone at St. Aidan’s College. We made sure to tell everyone that it didn’t matter if they’d had eight years of drama school or if they sang one line in their nativity play: enthusiasm was the only qualification needed. We originally had 25 characters in the script, but we had such a great turn out that we had to write in more to accommodate for all of the talent. We even managed to find a pantomime dame!

See their trailer at http://www.youtube.com/watch?v=_PTjV-yFwlA&feature=youtu.be

Have you decided to include musical numbers?

We certainly have. The majority of our musical numbers have been drawn from the Klute playlist, but we’ve also got some Christmas songs in there and some 80s tunes, so there’s a good mix. During rehearsals we’ve also been playing around with the lyrics to songs which has been great fun.

How have you found working with other students, many of whom might be older than you?

I think it’s difficult because a lot of them are my friends as well. I found the audition process particularly hard. You just have to try to remain objective and think about whose individual strengths are best for this particular production. But other than that, I think that because there’s a lot of collaboration, there’s a really casual atmosphere in rehearsals and we’ve had no problems so far.

Pantomimes are quite famous for their overproduced scenery and set, what are you doing with your production?

We’ve been working with our arts coordinator, Sofia Greaves, and decided to only go with a few backdrops because a lot of the key scenery comes back later in the script. It’s all been designed and created by students which has been great for getting the college involved. A lot of freshers are helping with the lighting and whilst they may not have a great deal of technological knowledge now, through the panto, they’ll now be able to get involved with other productions.

What have you found to be the most challenging aspect of the production?

I think that’s it’s been quite hard for me as the writer to watch the script change. I like to think that I’m really open-minded but I did become really quite attached to it. At the same time, its also been one of the most rewarding parts, seeing how your script is being used practically and all of the changes that have been are certainly for the better. As with most Durham productions, we’ve had our fair share of trouble with logistics. Just trying to get all 25 people to rehearse at the same time when everyone also has their schedules is a bit of a nightmare.

There are quite a lot of college pantos this Christmas, what makes yours different from the others?

I think people with have certain expectations when they hear we’re putting on Snow White, but our production is a bit different. We’ve included a lot of twists to the plot, all of those new characters, references to current affairs and an awful lot of Durham jokes. Also because it’s on for one night only, the cast will be going all out to give you a great time.