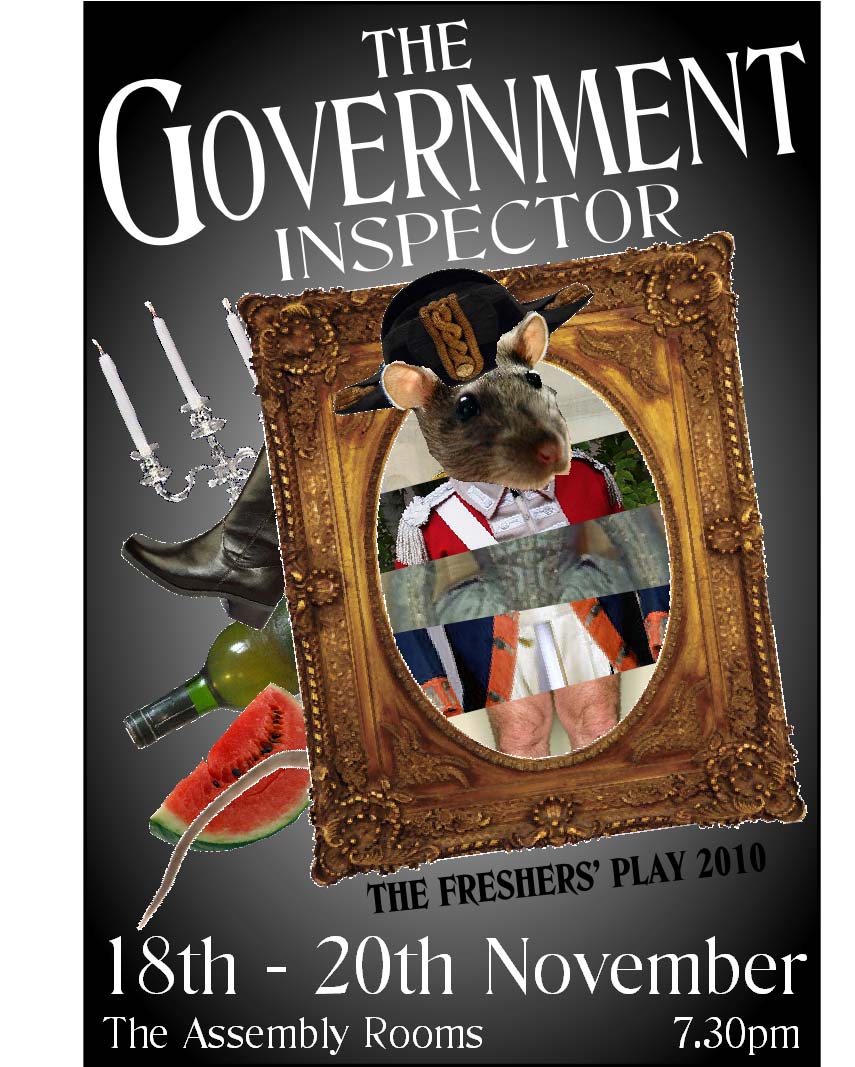 A story of rats, watermelons and lost trousers…

Directed, produced and starring first-year students, the annual DST freshers’ play is the first opportunity in the Durham University theatrical calendar to assess a whole new intake of dramatic talent and technical skill. This year’s production is The Government Inspector; a satirical story that follows the corrupt officials of a Russian town as they are faced with the imminent arrival of a government official who has been dispatched to investigate their activities. It is a farcical tale of mistaken identity that promises to provide some light-hearted relief as the summative essays begin to loom large on the wintry horizon. First written by the Ukrainian playwright Nikolai Gogol in 1836, the freshers’ cast has updated the production to bring us a hilarious theatrical treat that aims to usher in the festive season with a hearty laugh.

The show’s first-time director Charlie Oulton made the spur of the moment decision to pitch this play to DST and his spontaneous choice has definitely paid off. Describing The Government Inspector as a “timeless comedy”, Oulton reveals that the inherent humour was indeed one of the principal reasons for choosing this particular play. The comedy remains the main selling point for audience and cast alike and stands in stark counterpoint to the serious nature of other recent student productions.

According to the dynamic duo of Oulton and producer Lucy Smith, they had no clear concept for the production at the outset but immediately recognised the comic potential of the show. Smith describes their version of The Government Inspector as a “mishmash of Monty Python and Faulty Towers”, although Oulton is keen to stress that the show is “not slapstick idiocy”. The weighty themes of bribery and corruption provide the dark undertones to this otherwise absurdly humorous theatrical experience.

Both director and producer enthused about being entrusted with the Assembly Rooms Theatre and they have revelled in this newfound independence and control. Having performed in a small role in the The Government Inspector at school, Oulton notes that this time round, the experience is much more “grown-up”. Smith remarked that staging the play has been “an amazing experience” and both have mentioned the potential to collaborate again on future DST productions.

Smith affectionately describes Oulton as “a wacky, wacky director” and it is true that the ambiance of the rehearsal room was exquisitely bizarre. The backstage crew discussed the best way to roll a watermelon along the stage and explained the difficulties of lowering a noose from the ceiling. Robert Smith, who plays the Mayor, described this personage as “one of the most neurotic characters ever” and, based on the snippets of the rehearsal that I was lucky enough to see, all of the characters in this flamboyant comedy seem to be larger than life. We should also play close attention to the unusual scene changes, for an unexpected laugh…

Described by the producer as “a big Russian farce”, a sense of surreal hilarity spills over from the show itself and pervades every aspect of its mise en scène; during the technical rehearsal, we were alternately plunged into darkness and blinded by flashing lights, while many members of the crew were running around wearing multicoloured wigs. However, despite this widespread joviality, the show retains a strong sense of professionalism and every member of the cast and crew that I spoke to voiced an almost tangible enthusiasm to make the show a roaring success. A special mention must go to Matthew Ramsbotham, the technical director, for his excellent work throughout the production process.

This indomitably enthusiastic cast described the atmosphere of their rehearsals as “funny”, “lively” and “pretty crazy”. But the most common adjective amongst the cast and crew was “fun”, which seems to encapsulate the essence of this year’s freshers’ play experience. Everybody exuded good humour, which will hopefully overflow into their performances on the stage.

It seems then, that the freshers’ play is about so much more than the production itself. It captures the essence of university life and shows new first-year students why Durham provides such a great atmosphere to live and work in. The main reason cited for getting involved in the freshers’ play, as opposed to any other production, was the opportunity to meet like-minded freshers; indeed Smith remarks that “the massive cast” was a very appealing aspect of the play, as it has allowed as many people as possible to get involved. Although they were complete strangers at first, The Government Inspector has provided an unrivalled opportunity for the cast and crew to interact in a creative environment. A sense of camaraderie was palpable in the theatre and, as it was frequently remarked, all of these thespian freshers are “in it together”.

With the staging of the freshers’ play, The Assembly Rooms stage becomes the showground for new talent both onstage and behind the scenes. This year’s production offers a mixture of experienced acting ability and talented freshers who have thrown themselves in at the theatrical deep end. Many of the cast expressed a desire to become involved in DST productions in the future; The Government Inspector is thus a foot in the door for the future of student theatre at Durham and an opportunity to mark out the stars of the future.

According to Smith, the production is “spectacular” and the cast are “buzzing” with an enthusiasm that can only increase as opening night draws ever closer. The Assembly Rooms seems a welcome alternative to the library and Robert Smith, in his capacity as the Mayor, states that “the essays can wait” until the show is over. I must say that I am inclined to agree.

For a taster of the play, watch this announcement from the Mayor: