Each summer, the Collingwood Woodplayers stage a duo of outstanding plays and this week Durham audiences have the unique opportunity to watch a classic Shakespearean comedy followed by an innovative adaptation of a legendary cult horror film, both in the al fresco environs of Collingwood College (weather permitting).

For the first showcase of Collingwood’s acting talent, first-time director Carly Sloane has chosen to stage the classic comedy A Midsummer Night’s Dream, explaining that her favourite Shakespeare play is “perfect for summer” and represents an ideal complement to the easy-going, sun-soaked atmosphere of post-exams entertainment. The action of the Bard’s famous play unfolds in an enchanted forest and Sloane’s production, faithful to Shakespeare’s setting, will take place in the Durham University Botanic Garden, presenting a unique opportunity for Durham audiences to watch open-air Shakespeare in this picturesque setting. Sloane hopes to maintain the midsummer magic of her production, and to stand out against Durham’s crowded summer Shakespeare schedule, with this radical departure from the traditional Woodplayers’ stage in the Collingwood College turning circle.

The director excitedly remarks that the brilliant cast has willingly embraced the challenges of the script, although remains aware that Shakespeare’s strict meter and rhyming couplets leave no margin for error. However, judging by the rapid progress of their rehearsals, this should be a faultless performance by the Woodplayers. For the enthusiastic director, the frequent and “highly amusing arguments” between the comically fraught characters are highlights of the play, citing the enigmatic insult “you acorn!” as her favourite line. In the absence of possibilities for innovation at the level of the script, Sloane hopes to attract audiences to the Botanic Garden with her eye-catching poster campaign (rest assured, the actors will indeed be fully-clothed throughout the performances… ) At the start of production week, the atmosphere in rehearsals is positive and the energy of the cast, and the chemistry between the characters, should translate well onto the stage during their three performances. As Sloane remarks, the unique Woodplayers’ charm is born of the ability of the actors to polish their performances in time for the opening night, despite the laid-back atmosphere of their rehearsals. 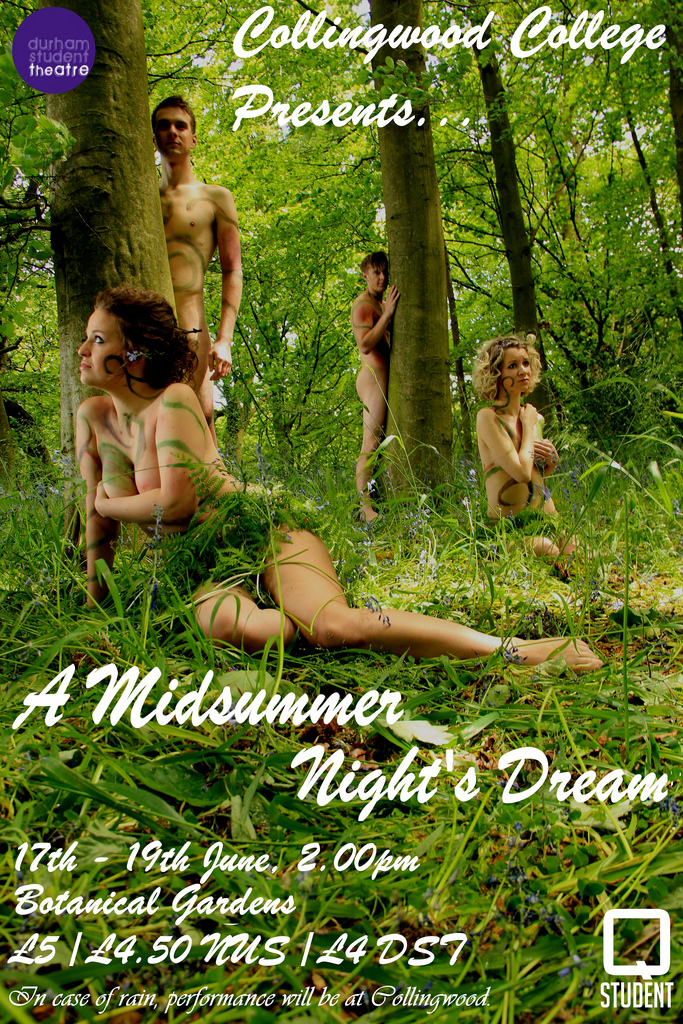 Standing in stark contrast to Sloane’s Shakespearean comedy is Cole Sims’ adaptation of Night of the Living Dead. Familiar with adapting films for the stage, Sims chose George A. Romero’s 1968 cult horror classic with the intention of bringing a unique spectacle to Durham audiences, joking, “we don’t see people dressed as zombies enough!” The innovative director guarantees that Durham audiences have “never seen anything like this before,” an ambitious promise that he aims to fulfil with three (literally) explosive performances of the biting social critique that tore the foundations of the horror movie genre limb from limb. Sims’ script, which remains “quite faithful” to that of the film, still includes the iconic line “they’re coming to get you, Barbara…” (spoken in an appropriately sinister voice) but nevertheless invites improvisation by the small speaking cast.

The play follows a group of individuals who struggle for survival in the wake of a zombie apocalypse. Given the choice between barricading themselves in the basement and fleeing into the unknown, Sims’ characters enact an examination of human survival instincts and struggles for dominance within a dramatic life and (living-)death situation. The director’s personal highlights of the show are the “fire, explosions, cars and guns” that punctuate his script, remarking that he is grateful for the freedom to push the limits of a standard theatrical performance provided by his involvement with the Woodplayers. Set in the Collingwood College turning circle, a space that seems vaguely structured along the architectural lines of an amphitheatre, the audience will find themselves sucked into the action, with the living dead closing in around them. In addition to this inclusive set-up, students are invited to participate in the production themselves by playing the part of zombies (see below for details.) The lively energy of the protagonists contrasts perfectly with the deathly zombies and suggests that Sims’ production promises another unique spectacle for Durham theatregoers.

Although vastly different in every respect, both productions attest to the opportunities for innovation and creativity presented by college drama societies, with both directors exuding enthusiasm for their Woodplayers experience. Whether you are looking for a zombie-filled nightmare or a midsummer dream, the Collingwood Woodplayers promise to offer audiences a night to remember.

Tickets will be available from DST, outside Collingwood dining hall at mealtimes and on the door (until half an hour before the start of the performance) £4 DST, £4:50 NUS, £5.

To watch both plays, combined tickets are available at a special discounted price of £6.

In case of bad weather, performances will take place in Collingwood College.

To be a Zombie:

The role does not require any previous acting experience and as a member of the living dead, performers will not need to learn any lines (other than “uuuuurrrrrghhhh”) Email: c.h.c.sims@durham.ac.uk for more details.