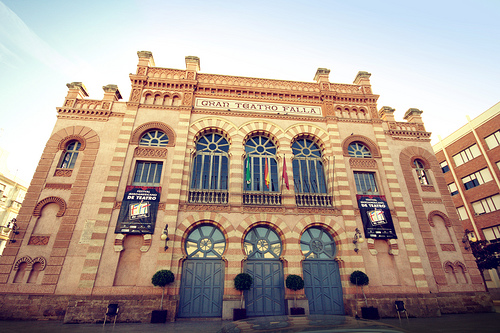 F.I.T. (Festival Iberoamericano de Teatro) is one night in and already well on its way to proving its value to the many tourists still straying around Cádiz city in mid-October. Currently in its 25th year, the festival lasts for eleven days and can be found in the street and theatre alike. A range of music, dance and theatre are available for all age ranges during the days and nights.

Having purchased our student priced tickets the week before in warned anticipation of a sell-out, we headed to the theatre an hour before start-time due to unallocated seating in the paraiso. On our way, we were unexpectedly ambushed by Ruralfoc, a pagan-dressed group performing with live fire, and juggling while pulling each other around on a trolley in between the crowds. As we dodged the embers, we reluctantly left the square to walk to the theatre. Our early arrival was not in vain; the queue grew fast and once the doors were opened, the race was on…

Once through the door, people were running past to get up the stairs. Clearly a practised tradition, my friend and I joined the hoards skidding round corners to get to their seats, giggling at the prospect of running to take our places. Entering the turret that was the paraiso my eyes widened at the large auditorium before I took in my surroundings. If you wish to take the budget option, no seats are provided; instead there is a large semi-circular staircase-come-bench system, which provides an array of seating. Peering over the edge, the auditorium consists of booths and stalls at the bottom, adorned with cherubs and clouds painted on the ceiling. It is obvious with a second glance that the Gran Teatro Falla, built in 1910, is dated and maintained as such. The intention of conserving this theatre in all its originality only continues to add to the atmosphere, with the seating plan merely becoming part of the Spanish theatre experience as it aptly sets the scene for the play that is about to take place.

The production of La Casa de Bernarda Alba was a clear success. A cast of ten women provided a hilarious insight into Spanish cultural behaviour, with the onstage action taking place within the claustrophobic setting of the family home. The use of flamenco music and dance united the audience and actors alike, as the spectators clapped along to the beat, creating an atmosphere of warmth and a sense of community. Sitting in the gods, I felt privileged to be a part of the paraiso family. Typically, Federico García Lorca’s play is considered to be a sombre and dark tale depicting a grieving widow who insists upon her five daughters mourning their father’s death to such an extent that no one is to leave or enter the house and poignantly no man appears onstage throughout the production. The cast manipulated this performance to their advantage, emphasising the monotony and confusion that could ensue from such imprisonment to create hilarity through repetition and exaggerated performances.

With a minimal set consisting of scaffolding and two doorways, the audience’s imagination was constantly at work but happily so, as this open set allowed the women to use the space effectively. Scene changes entailed the women flamenco dancing across the stage with tables and chairs balanced on their heads and the act of mopping the floor left a wet trail across the stage, alluding to the feel of sexuality and tension within the house. The play abruptly ends with the suicide of the youngest sister; this short and sudden act was not dwelt upon, yet the strong message of the play is still conveyed despite this nature of delivery. As of the presumed murder of her lover, no laughter is heard and the audience remain in stony silence for the remainder of the play. Bernarda’s final line, concerning her daughter’s virginity and not her unhappiness, rings throughout the auditorium as the lights fade out and we are struck by the gravity of the situation. Whilst this performance was cleverly designed to amuse, the actors did not completely avoid the heavy underlying message of men’s effect on women, nor that of repression and conformity, as the audience are shocked out of laughter within the closing minutes.

Born in 1898, Federico García Lorca developed a flair for the arts from an early age. His first theatrical production, The Butterfly’s Evil Spell, opened in 1920 and the following year he was a published poet. Lorca quickly became successful but wanted to escape the gypsy reputation he had begun to acquire, thus he moved to New York to study English where he was also able to broaden his theatrical experiences. Two years later he returned to Spain to form his own theatre company mainly consisting of students. This group travelled, performing for free and they also produced the three tragedies on which we can base Lorca’s final reputation. Blood Wedding (1933) and Yerma (1934) form two thirds of this trilogy, while The House of Bernarda Alba is presumed to be the third section. Lorca had only finished the first draft of this play before he was assassinated under the rule of Franco and his Nationalists. As an intellectual, Lorca was considered a threat during the Spanish Civil War and so was shot and buried in an unmarked grave. From then on his name was banished and his writings banned. Many began to view him as an international symbol of the politically oppressed. At the age of 38 Lorca had only begun to achieve half of what he was capable of and he remains today a widely respected poet and practitioner.