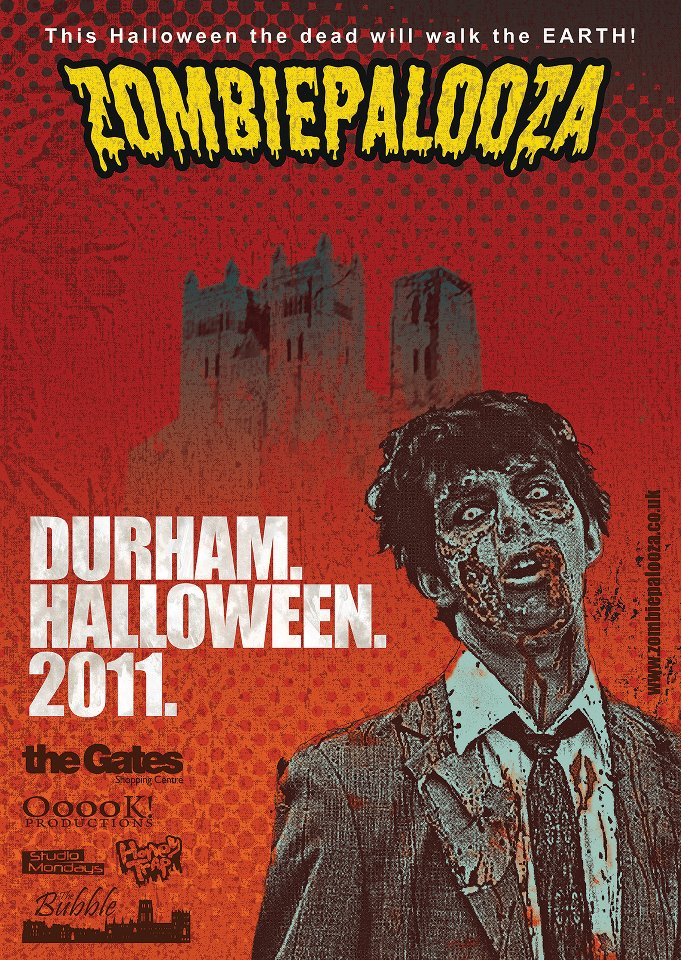 You may have noticed on The Bubble of late, and in Durham City itself. In fact, it’s highly likely you’ve been warned of an imminent zombie apocalypse for which you need to prepare. For those of us who move in geeky enough circles to have already established zombie survival plans, this was finally vindication; for everyone else, time to panic and choose a weapon.

Don’t worry. It’s only a drill.

Zombiepalooza – the inspired title for this citywide scare-fest – is the brainchild of Carlo Viglianisi and Nick Malyan at Empty Shop, the Durham-based arts organisation currently working from The Gates shopping centre. It will in effect be three events in one: Enemy at The Gates, a tour behind the scenes at the centre which is destined to take a sinister turn; a screening of Dawn of the Dead in another empty shop armed with popcorn and marshmallows; and a flashmob beginning at an unconfirmed location and ending up at The Gates. Afterwards there will be cheap drinks deals in Studio for the undead – and yes, you will be expected to dress as a zombie if you’re not being chased by them.

According to Carlo, the idea for Zombiepalooza was born about two and a half years ago, when Empty Shop was running from another unit in The Gates. Early in the morning or late at night, they’d have to wind their way through the service corridors to pick up the keys – “it was just so creepy! An empty shopping mall, there’d be this Muzak-type stuff playing, and then an old lady would shuffle along or something… so we already had this joke about how it was just like Dawn of the Dead and it would be great to do some sort of zombie event”.

Beginning with the simple concept of screening the 1978 George A. Romero classic (“that remake was horrible”), a couple of months of planning have seen the introduction of student theatre company Ooook! Productions, whose members by the time you read this may already be busy making vats of sticky red liquid and practising looking a bit poorly as they prepare to provide the zombie action. There’s a good chance that this will prove the most memorable night of the city’s year. Unless, of course, your hippocampus ends up in an undead stomach. 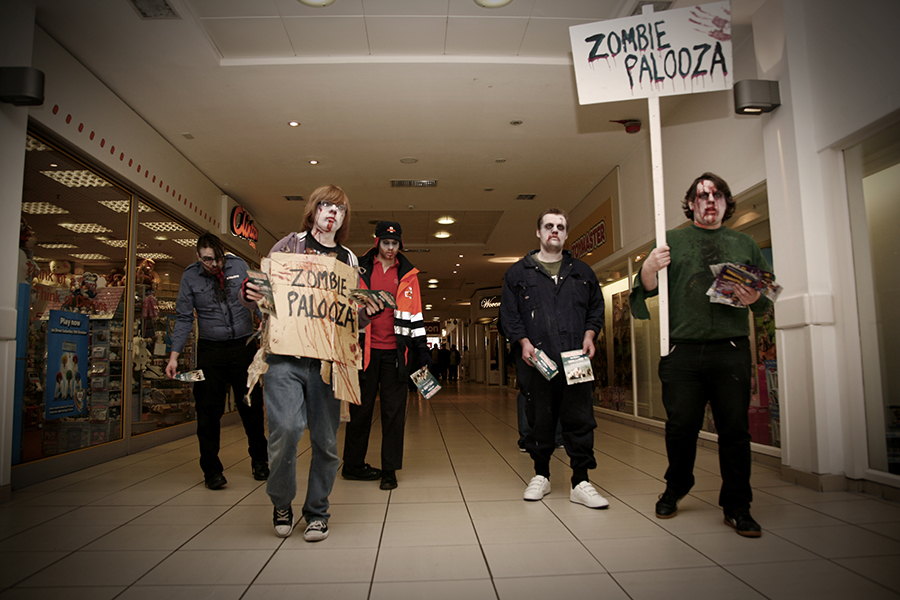 “When we first got the zombie make-up, we went for a walk around…”

For those readers who may be concerned about the logistics of the zombification process, a word of reassurance: there will be prizes for the best zombie costumes on the night, but it’s entirely up to you how far you take the transformation. “We’re going to post some Youtube videos that we’ve found quite useful,” says Carlo. “Fake blood-wise, just make your own. It will be cheaper and better. The fake stuff you buy from joke shops often looks too red; we use red food colouring, maple syrup or golden syrup and then some chocolate sauce, or even use some coffee granules to make a thick brown paste and pour that into the red mixture. That gives it that kind of dark, opaque colour. It’s not red – it’s reddish, then it dries dark – and it smells really sweet, but it comes off.” We’re also reliably informed that biting people might just be a bit too far.

It sounds, though, like the real danger actually comes with looking too convincing. “When we first got the zombie make-up we went for a walk around, trying it out. We just went out and handed out some flyers and knocked on some doors, and this one guy came out with his lacrosse stick, beating us back looking genuinely freaked out! We had to keep in character as well, so we got a bit of a beating, but it was all good fun really.” We’re not sure our weapon of choice would be a lacrosse stick, but it’s almost reassuring to know that, when there’s no more room in Hell and the dead walk the earth, there’ll finally be a use for some Durham stereotypes.

Although the concept is definitely transferable to other cities, Empty Shop has even bigger and better plans for Durham: depending on the success of Zombiepalooza, there’s the potential for repeats in future years as well as more “really fun events-based cinema” ideas, but Carlo is keeping them to himself for now. In the meantime, we’re glad they’re providing a much-needed public service – when the zombie apocalypse finally happens, we’ll be glad to have had some practice.

Now, for those who want to enjoy a night as the living dead in Studio, the most important question: Will the DJ play ‘Thriller’? Carlo smiles. “I’m almost certain they will- it’s sort of an instinct to do that. If anybody knows the dance that will be perfect!”

Check www.zombiepalooza.co.uk for remaining tickets for Enemy at the Gates and Dawn of the Dead, to provide contact details for the flashmob and for tips on zombie make-up.