You arrive at the airport without any knowledge of your destination, having only been provided with a time, a locker number, and a key. In the locker, opened with the key at the aforementioned time you collect a ticket. You fly, but you know not where, the events of your journey are pre-determined and completely unbeknownst to you. Your trip has been tailor-made for you, designed entirely by theatre professionals as a live-action immersive experience, and you are clueless as to what is about to happen. Would you do it?

They call it Punchdrunk Travel. It is an extreme version of the type of ‘theatre’ created by Punchdrunk, a British theatre group whose immersive performances have earned worldwide renown and notoriety. Artistic Director Felix Barrett develops these productions, which are often site-specific, on enormous scales, the largest of which will be Punchdrunk Travel. The logistics of the endeavour are, naturally, top-secret but they will undoubtedly be worth keeping an eye out for.

Punchdrunk’s immersive theatre has ranged in inspiration from Shakespeare to Doctor Who. Its most recent production is ‘…and darkness descended’, an authentic-feeling live-action video game situated under the railway arches of Waterloo Station, in collaboration with Playstation for the release of new first person shooter video game Resistance 3. In an Evening Standard interview Barrett said, ‘All the threat-laden, tension-filled fun of a video game will be magnified when it’s actually happening to you’.

Despite having worked with Doctor Who creators, Playstation, and Stella Artois, not all of Punchdrunk’s projects are commercially supported or as linked to popular culture. Unsurprisingly, due to the scale of its productions, Punchdrunk has never once broken even. The most famous of its shows, the wildly successful ‘Sleep No More’, is a captivating immersive experience loosely based on ‘Macbeth’. It has made major waves in New York, attracting the likes of celebrities such as Natalie Portman, Neil Patrick Harris and Matt Damon.

So exclusive is Punchdrunk that it never advertises, making it seem impossible to get hold of tickets. So when the New York run was extended I jumped at the chance to go. And thus I found myself ‘immersed’ in the McKittrick Hotel, the ultimate theatre set, consisting of three abandoned New York warehouses which have collectively been transformed into a 1930s film noir hotel, home to the story of ‘Macbeth’. ‘Sleep No More’ imagines the ‘unseen text’ of ‘Macbeth’, and takes its audience down new storylines that at times collide with the original version of the story.

The confirmation email warns that, ‘Guests may encounter intense psychological situations’ in the McKittrick. They are not kidding. Upon entering, the ‘audience’ checks in to the McKittrick and is asked to leave everything behind. Everyone is then directed to a 1930s speakeasy with a distinctly illicit feel. After being handed white Venetian masks with which to cover our faces, the audience is invited into the hotel. The masks are Punchdrunk’s way of ensuring anonymity, encouraging voyeurism and distinguishing between actor and audience. 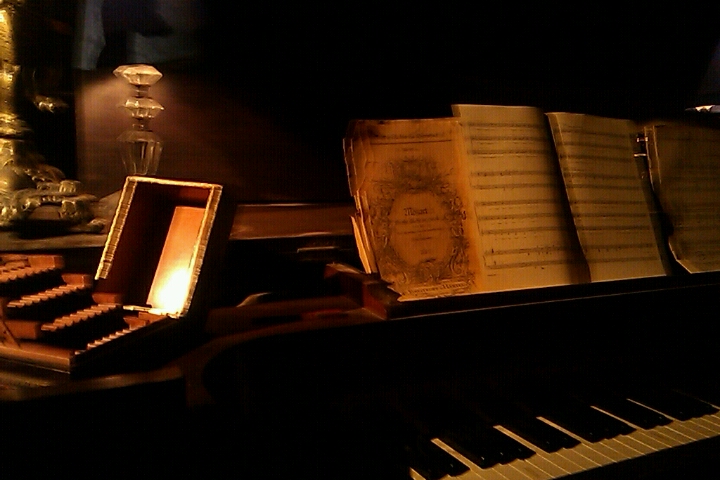 In the lift, the porter of the McKittrick (and, of course, of ‘Macbeth’) reminded us, ‘fortune favours the bold’. He then opened the door, proclaimed our arrival, released only one person, and closed the door once more. ‘This is an individual experience’, lest we forget.

I admit to some serious trepidation when we were finally released from the lift. The first room I encountered contained an empty crib, with a number of headless dolls hanging from the ceiling. I see Barrett finds some value in a popular theory that perhaps the Macbeths were childless and trying to use power as a substitute for progeny. Turning around, I discovered that I was alone in the room, and the result was positively chilling. I hurried into a room with a fellow participant, and began to finger through books, letters and various other 1930s ephemera. Examining the vast set makes the experience more like an art installation than a performance, and while many take that approach, I was keen to find some characters.

I reluctantly moved on, still petrified of being alone. I soon encountered a pregnant woman and immediately was grateful for my intimate knowledge of the story of ‘Macbeth’. This was Lady Macduff. She was at the front desk of the McKittrick about to check in (much artistic license is taken with Shakespeare’s text). She was seduced and drugged by a woman dressed as a maid who I assumed, perhaps erroneously, was Hecate. Dizzily Lady Macduff danced around the room, only to begin running, at quite a pace, down some stairs.

Following actors around quickly became exhausting. One time I bruised my knee falling up dimly lit stairs in pursuit of Macduff, another I cut myself rather badly trying to get out of Lady Macbeth’s way. The actors behave as though they are alone, and though you may try to follow them closely, there are times when quick movements are necessary. It all makes you feel part of the story.

At the outset we were instructed to maintain silence throughout the experience, to keep our masks on, and to touch anything but the actors. I did not, therefore, expect the actors to touch us. Having followed Banquo very forcefully for quite some time I was the closest to him when he stopped suddenly, turned around and took my hand.

He pulled me into a room and shut the door behind us. He locked it, which I realised when I heard my fellow followers fruitlessly rattling the door handle. Banquo removed my mask. What happened next is for me to know only. No other member of the audience was privy to what went on in that room, and that is what makes ‘Sleep No More’ such a unique experience for every individual. All I will say is that aggressive pursuit reaps excellent reward.

It is inevitable that no one participant will manage to experience everything in three hours. In order to maximise viewing potential, the events of the story are repeated three times, each set culminating in the infamous banquet scene, performed in flawless slow motion. At the end of the third and final repetition, Macduff exacts his revenge on Macbeth by hanging him over the gathered audience in a horrifically convincing manner. Women were gasping. His body was left hanging as we reluctantly exited the building.

A sense of danger is very important to Punchdrunk. If the danger doesn’t feel real the effect quite simply isn’t there. That is what makes its productions so remarkable. In a situation which feels genuine participants lose themselves in the world around them. I was emboldened by each frightening encounter, and having shed my fear early on I bravely ventured into pitch-black spaces unaccompanied, reached discomfiting proximity to actors, and solitarily wandered the abandoned mental hospital occupying the top floor, complete with madmen’s ravings scrawled across the walls.

As far as the plot of ‘Macbeth’ goes, there was much that I missed. If there were witches anywhere I didn’t see them, and despite witnessing Banquo’s death twice, I never saw Duncan murdered, though I saw his body found. The smatterings of plot I collected were more than enough because plot comes secondary to atmosphere in ‘Sleep No More’.

Punchdrunk takes the fourth wall and shatters it to pieces, all to an eerie Hitchcock-esque soundtrack. In a Punchdrunk production your blood is pumping, your pulse is racing, your instincts are engaged and you are very much a part of the action. Felix Barrett often says that he aims not to create theatre that you watch but theatre that happens to you.

What makes ‘Sleep No More’ so exhilarating is the mingling of horror and fear with the assurance that you can’t possibly come to harm. It’s like surviving a near-death experience, emerging from it alive with a completely altered perspective. With its work reaching an ever greater scale in the form of Punchdrunk Travel, Punchdrunk will never cease to amaze. Felix Barrett has said his audience has to feel like there’s a possibility a choice they make will lead them to go wrong. He certainly has made no such choices so far.