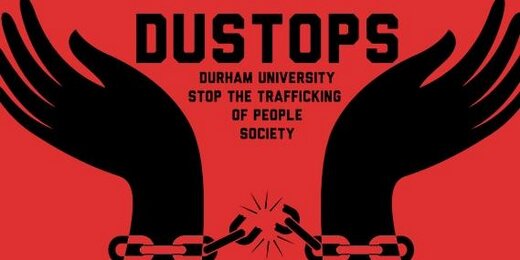 If you knew that November 25th was the International Day for the Elimination of Violence Against Women, then you are far more socially aware than I am. Durham University Stop the Trafficking Of People Society (DUSTOPS) is certainly just that and decided to mark the day with a truly incredible event.

Monday evening saw Actors for Human Rights, a branch of Ice and Fire, a national theatre company, come to Leech Hall in St. John’s College to deliver a series of monologues about human trafficking based on first-hand experiences. Whilst this may sound impressive enough, the event turned out to be much more than that.

The evening opened with a short quiz, led by our speaker Sue Buxton, which, alongside a copious amount of Fairtrade chocolate, covered a variety of human rights issues, from gender equality to our perception of Britain as a morally superior haven for the oppressed. It served as an excellent ice-breaker, both in terms of the material which we would encounter later, but also in terms of the group; in that the interaction completely broke down the fourth wall and provided an intimacy which would prove critical.

Regarding the monologues themselves, the members of Actors for Human Rights could not have treated the incredibly harrowing subject matter with any more respect or courage. As was poignantly described by Sue Buxton, any attempt to dramatise the material would feel inappropriate. Indeed, I could imagine how any attempt to act out the horrifying accounts of group rape, molestation and abuse, even in good faith or taste, is to take a step towards recreating something that we will never truly be able to imagine or understand. To do so, would be to suggest that the actors could understand the monstrosities and worse that they could perform them as some form of twisted entertainment.

Their response was something which the group has dubbed ‘rehearsed reading’. Members of the group would read out the accounts, using the medium of drama only to give the pieces a human voice, allowing the message to resonate in a way which could never be achieved on the page. Similarly, no attempt was made in the way of lighting or costume, the issues weren’t belittled for us by providing them with a stage; instead complete emphasis was placed on the communication of the stories.

The effect was overwhelming. The act of recounting these stories of forced prostitution, slave labour, depression and one woman’s desperate attempt to accept a child she bore due to rape, rang around the small hall and brought several members of the group to tears. If possible, the entire event proved all the more chilling given the media coverage of three victims of human trafficking who have recently been discovered in this country.

This is an event that I am ashamed to say I originally attended as a reviewer rather than a concerned individual. To me, the concept of reviewing such material now seems completely out of the question. Just as it feels unnatural to call Monday’s event a performance, it also feels unnatural to have a prescribed reaction against which to judge it: Monday’s group met each of the readings with applause, but it was certainly was applause out of appreciation rather than commendation of the ‘actors’. It is also very easy to imagine how a different group could have reacted by standing up or even simply with silence.

One thing does however remain certain, should any of DUSTOPS future events prove even half as effective and informative as this one, I urge you wholeheartedly to go.