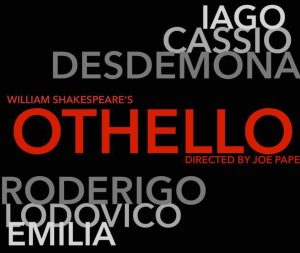 “Above all else, I’m trying to make Shakespeare accessible to everyone…”

William Shakespeare’s famous tragedy remains one of the most widely performed of his plays. The central themes of love, jealousy, betrayal and racism are all still so relevant to society today. When I was tasked with putting on a play for Bailey Theatre Company, Othello immediately came to mind.

There have been many adaptations in recent times, from Laurence Olivier’s infamous interpretation of the titular character to good ol’ Kenny Branagh’s performance of the scheming Iago. Whilst the artistic value of blackface has definitely not translated into the 21st Century, our production should still be something a little bit different to what you may expect.

Our Othello has a run time of 90 minutes with a 15 minute interval at the halfway point. The action of the play – the deceptions and feuds – are ignited by the claustrophobia of these characters living together in such close quarters. A student audience may even find the atmosphere akin to that feeling of life in the Durham bubble. I’ve tried to use the speed of the production and the smaller cast number to maintain that tension and intimacy.

Editing Shakespeare so heavily will inherently come with a high level of scrutiny. Above all else, I’m trying to make Shakespeare accessible to everyone, even those who may not have enjoyed the mandatory study of his work at school. I’ve focussed on the main action within the play and merged the peripheral characters of the story to create a truly ensemble performance and keep the audience engaged throughout.

We were hugely overwhelmed with the response we had from our casting call, and from an incredibly talented group of auditionees, we were able to find our amazing cast. It’s been an intense rehearsal process – with just over 3 weeks to get the whole production ready to perform. It’s been a challenge at times trying to fit around everyone’s busy schedules, but everyone has been so committed to rehearsals – including my poor Assistant Director Issey Pistor, who I’ve dragged into college for the past few weeks.

As I previously mentioned, the play touches on several social issues. The destructive, psychopathic Iago exposes the raw insecurity within Othello. Most of us can empathise with that naïve dependency of first love, although perhaps not with the way in which Othello acts upon it. Gender roles are also central to the plot too, exploring toxic masculinity and the expectations of the obedient woman within the time period and the undercurrent of racism serves as the platform to question the very nature of friendship, loyalty and love.