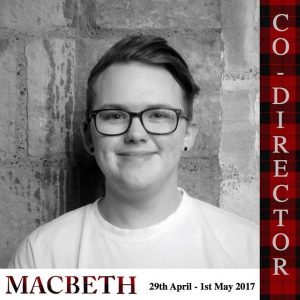 Macbeth is one of the most renown Shakespearean tragedies, and for first time directors a daunting task to take on. Nevertheless, we feel we have found a good balance between the old and the new, the classic and the traditional, and the expected and unexpected. Thus, this production promises a fresh yet respectful take on Shakespeare’s classic.

We have been very keen to keep this performance as authentic as possible. As a result, we have kept largely to the original script, adding no new lines at all, and cutting scenes merely when critical as to maintain momentum in the play. Whilst we shall be true to the classic, to bring something new we have decided not to set the tragedy in its traditional Elizabethan setting. Instead audiences are invited to step back into the historical world of the original Macbeth (c.1005-1057), and walk through the gritty highlands of 11th century Scotland.

Tunstall Chapel certainly adds a haunting ambience to the play, helping to bring the older Medieval world in to the 21st Century. The narrow traverse space has led to certain challenges in blocking movement; yet the audiences’ proximity to the action, combined with the eerie atmosphere of candles flickering against centuries old walls, it certainly is an impressive location. This venue has led to a number of practicable considerations, including the cutting down of Shakespeare’s exhaustive character list, and the multi-rolling of characters when unavoidable. Notably, both King Duncan and Malcolm are portrayed by the talented Ginny Leigh, whom provides expertly contrasting characterizations for each of these two monarchs. At the same time, this decision comments on the lack of real change within the Medieval Scottish monarchy by the end of this play.

Within this very traditional take on Macbeth, we decided to bring elements of nature into this play, both adhering to our 11th century highland setting and bringing the action closer to what feels like a more relatable world. Our interpretation of the Three Witches, for example, has been based on this theme of nature. Their earthly coloured costumes have replaced conventional depictions of them as wearing black. Instead of hag-like crones, they shall be presented as women who have learnt to survive in nature, and become one with it. Thus, this adds an element of haunting realism to the scenes whilst retaining impact and their critical presence in the play.

With an incredible cast and crew, Castle Theatre Company’s production of Macbeth will give you both an intriguing and traditional take on the Shakespeare’s classic. Join us in Tunstall Chapel for an evening to see this Shakespearean classic staged.