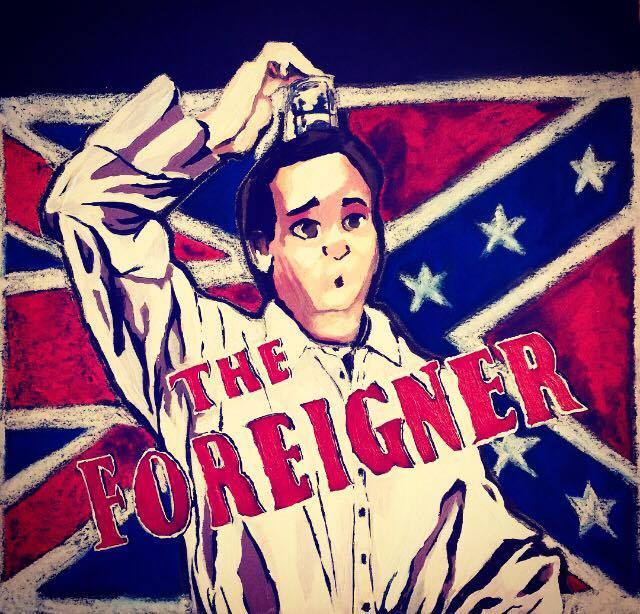 “Larry Shue’s comedic eye has perfectly captured the clash of cultures between the UK and our bold, brash cousins. “

Awkward British humour combined with southern American accents – what more could you want?! We’re a directorial duo as close as Reagan and Nancy (although with fewer lovers’ tiffs), and we’re proud to say that this production has been a blast from start to finish.

Larry Shue’s comedic eye has perfectly captured the clash of cultures between the UK and our bold, brash cousins. It’s no secret that we’re a self-conscious nation that has a love-hate relationship with small talk; the titular character, Charlie, has this down to a tee. Thrown in to a painfully hospitable and chatty situation, Charlie must overcome his Hugh Grant-esque social ineptitude whilst maintaining the pretence that he can’t speak a word of English. The simplicity of this premise allows for more focus and fun to come from the surrounding characters, who each bring their own unique comedic traits. First, Charlie is confronted with Betty, the excessively bubbly lodge-owner, who natters on from sun up to sun down. Then there is the southern Belle, Catherine, bratty yet beautiful but with a hidden soft side. Next is Reverend David, on the surface the perfect image of piety and saintliness, but there may be more to him than meets the eye. These are just a few of the characters that Charlie encounters as he learns to adapt and utilise the ‘foreigner’ persona to his advantage.

On a more serious note, this play offers a humorous take on a much darker problem – issues of racism and prejudice are still rife in the States and across the world today. Therefore, we have chosen to perform this show in aid of Refugee Action, to fly in the face of the abhorrent characters we witness in this play.

We would like to take this opportunity to thank our amazing cast and crew. We hope that you find ‘The Foreigner’ as fun and feel-good as we have, and that you gomo rum diddly moo!

‘The Foreigner’ is on at 19:30 from Thursday 30th November- 2nd December with an additional matinee at 14:30 on Saturday 2nd December, at the Assembly Rooms Theatre.