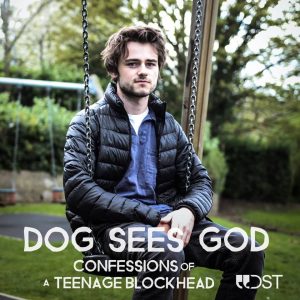 ‘I hope that we have been faithful to Royal’s reimagining of these characters’.

Being able to reimagine characters as universally loved as those of the Peanuts comics is a rare opportunity, but undoubtedly a risky undertaking. Those who grew up with the comics as children, or have even come to know them as adults, may be surprised by the radical transformation Bert V. Royal has imagined for Charlie Brown and his friends. By no means has Royal changed these characters for the worse – he has instead used them as a framework to explore and satirise issues faced by the modern youth today: repressed homosexuality, drug dependency, irrational behaviour, bullying and lack of identity. Given it’s the first scene of the play, it is no spoiler to say that Snoopy dies at the start of the play, and it’s this key moment in Charlie Brown’s life that indicates the distinct change in mood for the rest of the play. By giving each of them names referential to their childhood counterparts, Royal has managed to give new identities to each of the characters, but still alludes to their comic-book-selves frequently, yet subtly. I hope that we have been faithful to Royal’s reimagining of these characters.
My main inspiration for choosing this play came from wanting to stage a satire that could connect with modern students. I hope that students will be able to connect with the characters on stage to a certain extent, but hopefully viewers will derive more laughter than inspiration from the “lessons” they offer us. One of the main premises of the plot is the fact that each of the characters is trying to hide their true personalities to fit a certain social standard, which meant that, in some instances, it was only after five or so runs of a scene that we began to pick on the real meaning of what characters are saying, and understand where their motivations truly lie. There’s no doubt that there is a lot more to this show than meets the eye.

I have no doubt that the spellbinding performances of eight talented actors and actresses will serve as the perfect break from long, intensive days spent in the library. Coupled with beautiful performances from all eight actors, you’ll be pleasantly surprised by intermittent piano performances by the multi-talented Victor So, along with the chance to see what may well be some of your favourite characters from your childhood on stage. Even for those who have not even so much as heard of Charlie Brown, seeing “Dog Sees God” will still be the best decision you make all week.