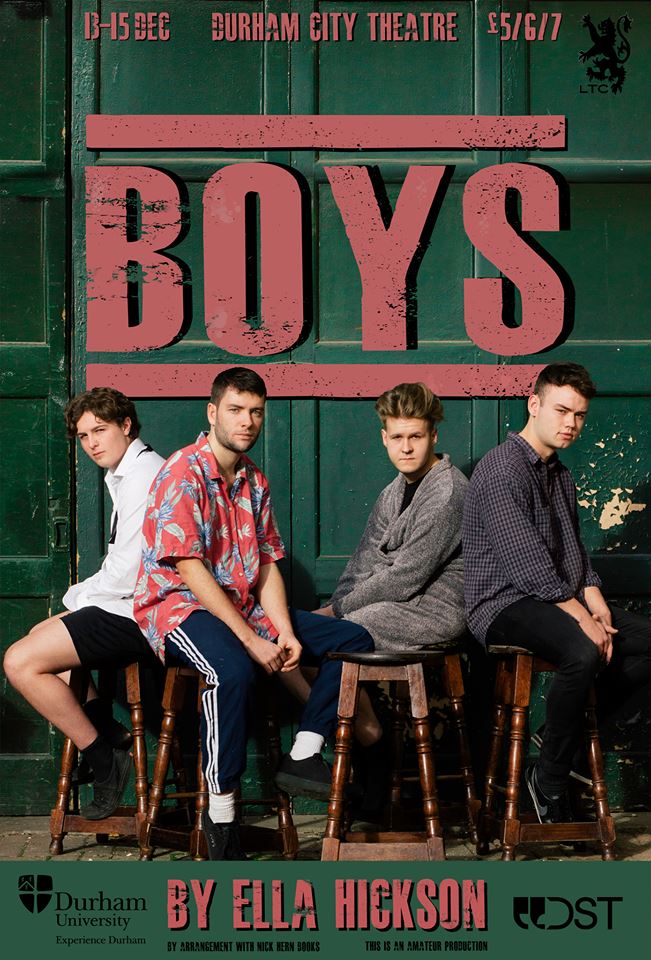 “This play offers a real and painful view into the difficulties of those who refuse to grow up, yet in a delightfully entertaining way.”
Credit: Florence Russell and Gregor Petrikovič

Having first read Ella Hickson’s Boys at school, I was struck by the way it tackled such intense and poignant issues without ever letting these issues overcome its sense of humour and entertainment. Boys is special in that is simultaneously funny, tragic and extremely real.  Set in the 24 hours before Benny, Mack, Timp and Cam are forced to move out of their student flat, the boys, alongside Laura and Sophie, decide to have a party. Drinks, drugs and dancing ensue in an attempt to avoid facing their issues, but as a refuse strike means the bin bags pile up, tensions rise as they refuse to discuss the elephant in the room. This play offers a real and painful view into the difficulties of those who refuse to grow up, yet in a delightfully entertaining way.

What really brings this play to life, however, are its characters. Each is distinct and different: Benny, distressed and morally righteous, broken Sophie (his brother’s ex-girlfriend), powerful yet world weary Mack, hedonistic Timp and his devoted, yet increasingly crushed girlfriend Laura, and nervous and pressurized Cam. Ella Hickson’s genius is clear in creating real characters, each with elements and layers relatable to any audience member.

These characters, however, could not have been brought to life had it not been for my being blessed with such a talented cast, who have given more than I could ever have wished to one of my favorite plays. The ability to make lines like  ‘You did a poo-dance at a girl who doesn’t speak any English’ (and many more) sound so genuine, whilst also being able to tackle the emotionally complex characters, is a true testament to their talent and endless commitment. The show would also have been completely unfeasible had it not been for my amazingly creative and persistent prod team. Having to source an entire kitchen is no mean feat for any producer, let alone a first-time one, but Damson Young with the support of Caroline Mosimman have outdone themselves, sourcing the weirdest set and costumes with the most amazing tenancity and enthusiasm. My thanks go to Emily Hicks, for creating a sound and lighting design that supports the maddest transitions, making them aesthetically enjoyable alongside supporting the naturalism of the show. Finally, my vast gratitude to my amazing Assistant Director, Alice Clarke, who, always a calming influence at the most stressful of times, has the best understanding of character that I could ever wish for. I hope then, that you enjoy Boys as much as we have enjoyed the process of making it. I hope that you find it funny, moving and provocative all at once. And, finally, I hope that for a couple of hours, you are transported, not to the City Theatre, but rather to an Edinburgh Student Flat.