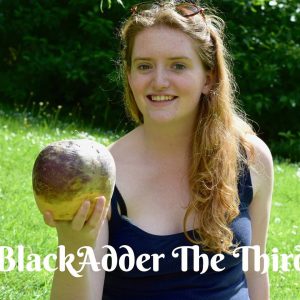 ‘You’re all in for a jolly good roister!’

When I realised I had an opportunity to direct this timeless British classic, it was a no-brainer. The sheer hilarity of Blackadder tinged with nostalgia and the occasional horrific pun has made this production incredibly fun and immensely satisfying in equal measure. That is not to say that transferring this well-known sitcom from screen to stage has been without challenges yet these have been far outweighed and I’m thrilled with the results.

One of the tricky things about this production was having to switch between different sets at a fast pace; rather than cutting from scene to scene our actors are having to run from one part of the stage to another. We have combated this with a mixture of savvy staging, courtesy of my wonderful technical team, and a few mini-sketches to fill the gaps between scenes. Moreover, although we can’t play the same tricks you can with a camera, we have gained the vast comedic benefits offered by the intimacy of theatre. Whether this is a sly glance out to the audience from Blackadder or physical comedy from Prince George, there are huge rewards to watching these characters in person. In particular, fourth wall breaks heighten our involvement with the comedy and the character’s themselves; we all start to feel personally involved with Baldrick’s cunning plans and Mrs Miggins and Macadder’s heinous sexual romps.

A risk with directing these iconic characters, who have been previously played by world-famous actors, is falling into the trap of straight imitations. Early on in the rehearsal process I did character workshops with the main four, with the intent of them developing their own comic voices and styles for these extremely well-known characters. The cast have all worked incredibly hard and successfully fueled this production with their natural comedic talents rather than relying on that which has already been done. Also, they have all shown tremendous versatility, particularly in taking on the host of loud, exaggerated supporting characters that make this play what it is; some of the funniest moments come from characters that have less than five lines.

Finally, I want to thank my cast and crew who have made this experience unforgettable. The entire process has been fantastic and I hope you have as much fun watching it as we have had making it. Trust me, you’re all in for a jolly good roister!

Hope to see you at the performance.