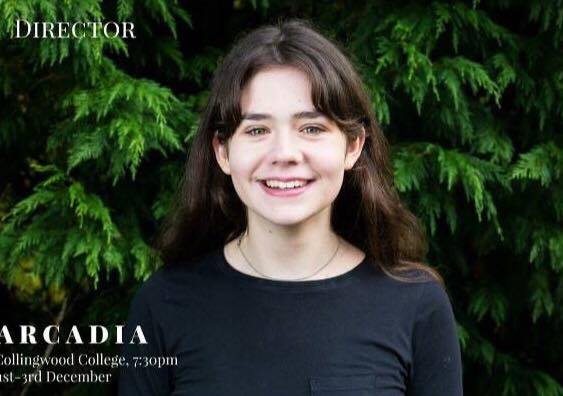 ‘I really want this director’s note to be a tribute to those involved’.

Directing a play after barely two weeks at university was most certainly a challenge. Although Arcadia, for a long time, has held a very special place in my heart, I was uncertain as to whether I would be able to achieve what I was internally visualising with a foreign structure and a set of complete strangers. From their perspective, I am sure the fear was even greater; a foolish fresher taking over their beloved winter play. I really want this director’s note to be a tribute to them. The play’s Producer Catherine Jones has been instrumental in organising, quite literally, everything and a constant support to Jess and I during the entire process. In truth, I don’t think Arcadia would have happened without her.

Furthermore, How do I even to start to explain what a magical presence Assistant Director Jess Green has been? From organising socials, directing the cast and arranging smaller details, the list goes on. The stage has been brilliantly designed under the magnificent orchestration of Annie Bird and Kim Alabaster. Peter Noble carefully planned the tech with the help of Mel Chan on the lights. Although this process normally happens at the end of rehearsals, both the technicians’ understanding and meticulous work has been distinctly impressive. Poppy Blance’s costumes were beautifully planned and constructed with detailed research into the period itself. You would think that spending everyday in a rehearsal room would be tiring. I would be lying to say that it hasn’t been. However, the enthusiasm and support of all the actors whether early on a Sunday morning or late into the evening of our tech rehearsal, has been overwhelming.

Indeed, from Nathan Chatelier kissing a stuffed frog to Ali Stanfield shouting ‘Arcadia’ after every single line and Jake Lennon flirting with two women simultaneously, in fact, the entire process has been filled with amusing moments. Arcadia is a hard play to master emotionally. It constantly swings between the hilarious and the tragic. All of the actors have achieved feelings ranging from intense love to snobbish superiority. It has been astounding to watch the developments.

In Addition, I would like to say a special thank you to Hugh Memess and Samuel Kirkman for their time and artistic genius on the trailer and general cast photos. Although they would dismiss it/ ridicule me for a century if I said it in person, but this is my opportunity to say that their talent is simply astonishing.I recently spoke to a third year Woodplayer about what first drew him to the company. He said it was the ‘family orientation’, that it felt like a ‘home’. After 2 months as a part of this family, I can safely agree with him. The community feel of Woodplayers is very apparent. As a young, very much naïve fresher, I had reservations about the experience. Would I be an outsider peering in to an already established group? Nothing could be further from the truth. Considering that I have known everyone less than two months, I feel this strange sense of pride for those who have taken part. I can only say that I hope I have another opportunity in the near future.