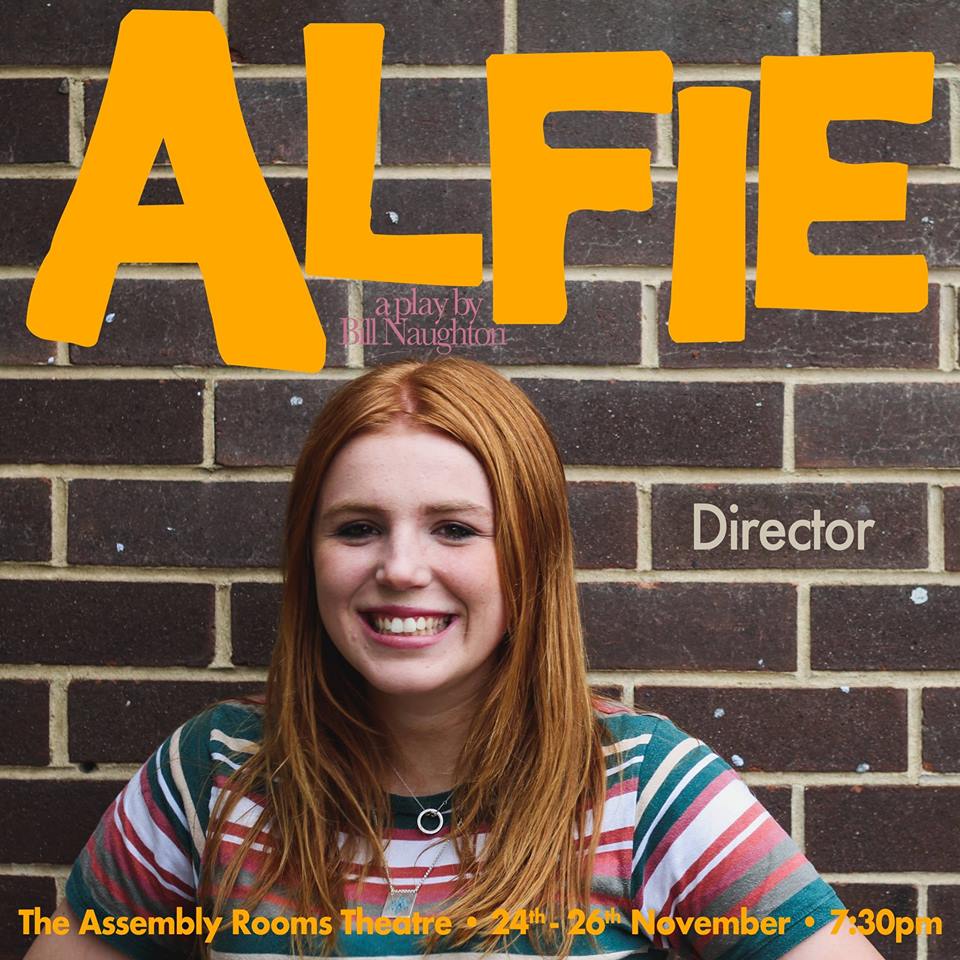 ‘When people find out that I am directing the Fresher’s Play I am usually greeted with a look of shock, horror and laughter’.

When people find out that I am putting on a production of Alfie I am usually met with the assumption that it is a film with either Jude Law or Michael Caine in it. Standing up to these great expectations, I propose that Alfie is far greater in it’s original form: a play not a film. Bill Naughton’s genius allows Alfie to have a connection with the audience that I have rarely seen from any character in any other play through his speaking to the audience taking them through his life, almost like a diary, but very aware of the theatricality of the piece. Yet this is very separate from the ultimate realism which is shown by the other characters, making the ‘diary’ of the Alfie’s life seem all the more lifelike. It is through the work of the other characters with Alfie that I hope to make the audience feel entertained, charmed and later heartbroken.

Artistically the play is challenging in that it requires an almost constant change in location. Thus by trying to keep the set reasonably minimalistic and simply trying to move essential bits of set of furniture on and off stage as little as possible, I hope that we will manage to create these locations smoothly. To aid this, I have lowered the front of the apron. As well as making the show aesthetically pleasing, this will help me show various locations as well as adding intimacy at moments where Alfie speaks to the audience. As well as using lighting as a way to shift locations, I aim to use music much throughout to heighten emotions, create mood in scenes as well as taking the audience right into the 1960’s from the very moment they enter the theatre.

When people find out that I am directing the Fresher’s Play I am usually greeted with a look of shock, horror and laughter. Frightening at first, but I have truly found this the best experience that I have had in my first term. I was taken away by the talent that we saw at auditions and the cast that I have ended up with are truly absolute gold dust: committed, fun and ultimately seriously talented. The experience has certainly been different to anything that any of myself, my cast or my production team have been used to, putting on a show in such a short space of time, understanding the logistics of working both with DST but especially the technical feats of the assembly rooms. Yet, this has certainly been a learning curve for all involved, and it is fabulous that so many of the cast and production team have plays lined up for later in the term and beyond. It really has been a baptism of fire, but one that we will all treasure, and hopefully pull off a fabulous show whilst doing so.

Alfie has been an amazing show to get the chance to direct as my first show at Durham. I aim to create a piece of theatre that is both truly enjoyable and entertaining but also ultimately heartbreaking as both Alfie and the audience come to the understanding that Alfie’s treatment of life and women is never going to help anyone.