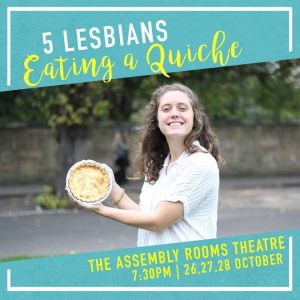 “…unsurprisingly I found the title difficult to resist.”

When Hild Bede Theatre announced their next choice of play as being Evan Linder and Andrew Hobgood’s ‘5 Lesbians Eating A Quiche’, unsurprisingly I found the title difficult to resist. Thus, months later, I find myself in the position of director to this marvellously zany production, and what a ridiculous and excellent process it has been.

The play gives everything its title promises and more – set in 1956, the five officers of the Susan B. Anthony Society for the Sisters of Gertrude Stein guide us through an (hopefully) hilarious tale of quiche-eating, lesbianism, and communist attacks. Our production, transposed from the original setting of America, has a quintessentially British twist, and the result, I feel, lies somewhere between Bake Off and Blackadder: whatever it is, it has been making me laugh ever since we held the auditions at the end of Easter Term last year.

Directing comedy was never going to be an easy ride, but I could not ask for a more talented cast and creative team to quell my constant underlying fear that nobody will laugh. My five Sapphic Sisters have been a dream to work with, and have been well and truly committed to every single absurd task I set them, whilst my wonderful team behind the scenes truly have been the backbone of this production. Having a somewhat disjointed rehearsal process, wherein the summer break fell between our casting and rehearsal periods, meant that the production week seems to have crept up on us a little bit, but I think we have reached a point now where we are just about ready, and I cannot wait to unleash my actors on an audience. It is an absolute honour to be the first new performance of the Assembly Rooms Theatre’s calendar this year.

Be warned, however: there is a non-negotiable contract for audience members on entry to the theatre – every single person in that auditorium is part of the Sisters’ meeting, and every single person must become a lesbian for the night. My main intention for this production was to immerse the audience in the preposterousness of the show as much as possible, and to give everyone a jolly good evening of flagrantly silly and unapologetically homosexual theatre. I sincerely hope that all attendees will appreciate my efforts, and the efforts of everyone else involved, and enjoy this serving of light-hearted theatre as much as we have enjoyed baking it up for you.