In Conversation: The cast and crew of ‘The Last Five Years’ 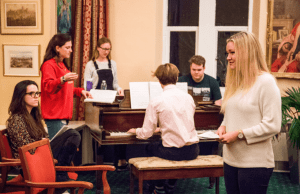 “I think it’s a very different play in a very intimate setting, it’s not what you expect when you see it.”

We sat down with Director Isabelle Eulkin (IE), Elliot Mather (Jamie, EM), Musical Director Bella Elwes (BE) and pianist Hector Halford-MacLeod (HHM) to discuss their upcoming production of ‘The Last Five Years’ and bringing it to the DST.

How familiar were you all with the musical before getting involved with it?

BE: I knew the music quite well and I watched the film
IE: I had listened to the music on Spotify, but didn’t really know the music that well at all and it was literally just because I was having a drink with someone who was talking about the musical. It was two days before the deadline to be director and I just bashed out this application and listened to the music on repeat and just really fell in love with the format.
EM: So I auditioned on a whim. Then I pursued listening to it and I loved it because it covers so many different genres, every single song is totally different, it’s not like your classical musical theatre sort of thing.
HHM: I literally knew one song ‘Moving Too Fast’ and nothing else, I play the piano in the show and if you listen to the song it’s an absolutely cracking piano part, fast and jazzy and I applied because of that song.

IE: But then when you say it wasn’t your thing, why do you say that?

EM: Just because it was a low-key musical, and I like the big, out-there crazy ones and this was just piano, a bit of string and small-scale, but then when I actually started listening to it I was like this is actually really impressive stuff.

So how did you approach that differently?

EM: I just sort of really immersed myself and listened to different people’s takes on it and tried to put my own slant on it. Musicals are so overproduced, but this is so free, open and easy that you can totally do it in your own way.
BE: I think also adding to that is that it’s all solos, there’s no interaction in-between, he’s interacting with the concept of Cathy being there.
EM: So this is totally different for me, I’ve always been one of a company in excess of twenty, whereas here it’s just me doing my own thing.

How is it different being a musical director for a musical which is much more stripped back compared to one on a larger scale?

BE: It’s an interesting experience for me because I didn’t have to teach any harmonies, it’s just solo songs so the actual teaching went by a lot more smoothly. It’s also meant that personally that I can give more musicality to each number, rather than just making sure every note was right by everybody.
IE: I don’t know if you saw Rent last week, but they had under three weeks to do that musical and it’s huge, and we’ve had six weeks to do it for two people which has been an absolute dream. It means that you can really work and finetune. It’s often so difficult because of how quick the turnarounds are, so to be able to work on it in a more professional-like capacity is quite nice.

Anything specific that you’d like the audience to look out for?

IE: Musicals are really funny because people are so aware of their production history, so people are almost aware of what they want to expect, and I’ve just said wait and see. When I’ve implied we’re not doing something in the way they’d expect, people get quite defensive so all I’d say is look out for a different interpretation.
EM: We just wanted it to be the best it could be, we’re not doing it to tick certain boxes, we’re doing it the best way that suits us. There are some notes that are pretty high and we’ve had to tackle them in a certain way, putting emphasis on different notes.

Have there been any difficulty with issues like that and difficulties in general?

IE: I’m not attuned with how musicals and singers work, working with singers more is interesting to me because the musical is an hour and a half, and apart from when the other person is singing, they don’t stop, so as a feat for a singer I think that’s something to look out for, their stamina is incredible. There’s no backstage either, they’re on stage the whole time so it’s not like you can have a moment by yourself.
EM: The songs in this are very technically difficult and especially for me earlier on because my character moves forwards, he’s younger and more energetic so the bigger songs for me are at the beginning. I get to end of the song and I’m so tired, and then you’ve just got to sit down and pretend that it’s fine, because in Jamie’s story he’s not actually singing these songs, when he gets to the end of his song he goes along with the rest of his day.
IE: In terms of student theatre and of the venue I have everything I could want, but in the West End if you were doing a forty-night run you would go off stage and you would have water breaks, but I think the limitations of student theatre have meant that I’m actually allowed to push them further.

How have you and the musical director worked together?

BE: At the beginning I had a block of teaching the music but we’ve just kind of merged the two roles together. Izzy says she’s not had much experience with musicals but she still knows about them and what she wants, and the same with me, I have an idea of stage stuff and we just worked together in that respect.
IE: I think the best shows are collaborative, and because this musical is literally sung the whole way through, to not take notes from the musical director would be so stupid because the music informs so much of how it should be performed.
BE: Another thing that was interesting about the rehearsal process which I liked, was to teach Cathy’s music backwards, because obviously she tells her story backwards, so we started with her final song so she could really build her characterisation up,

Why should we see it?
IE: I think it’s a very different play in a very intimate setting, it’s not what you expect when you see it. If you’re a musical fan you must come see this.
EM: This is one of the most interesting plays I’ve seen in Durham and I’ve been here for four years now, I am slightly biased being in it, but the way it’s been set, the fact we’re on stage the whole time, one’s going forwards, one’s going backwards, there’s just very interesting things going on constantly.