Whooping into the Emptiness – Lessons from Vietnam, Part I

As part of his remarkable journey around Vietnam, George Billinge recounts his intrepid adventure with friends, locals, and a motorbike named Diana. This is part one of two. 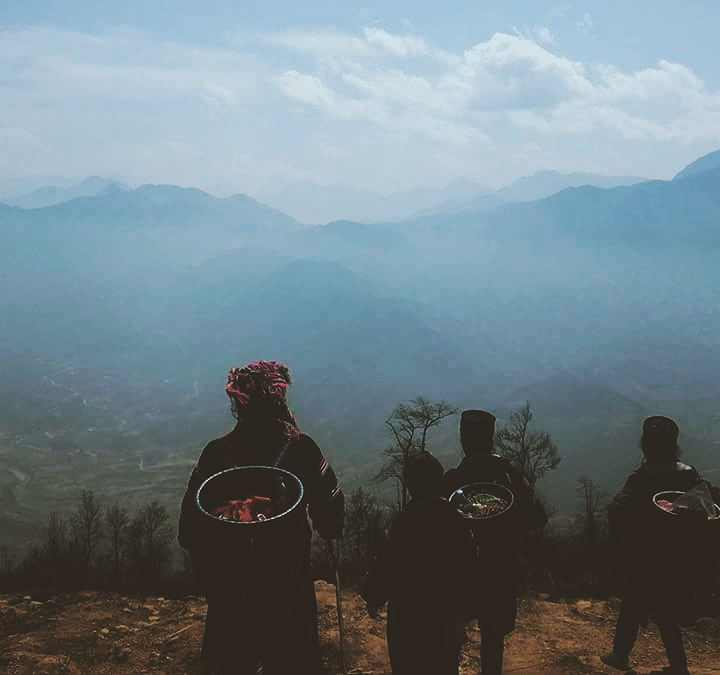 Driving the length of Vietnam on a motorbike with no previous experience was perhaps the most stupid thing I have ever done. It also proved to be one of the most unforgettable experiences of my life.

We bought our bikes for around $200 in Hanoi, pointed them north towards China, and rode into the mountains.

Whilst sipping local beer in a restaurant in the French colonial town of Sapa, we saw a poster made by an indigenous woman. We noted down her number, and she agreed to take us across the mountains to the village of the Black Hmong people, the tribe to which she belonged.

We followed elderly tribeswomen, who wore flip flops despite carrying packs as large as their bodies, over steep mountain passes. Our guide filled us in on all the village gossip as we hiked. She talked of how her brother-in-law had gotten drunk and fallen off the mountains to his death, and the constant danger of fire that had come about after electricity was introduced to their traditional wooden homes.

After spending her entire life in these mountains, she’s still not bored of them. I wonder if anyone could ever grow tired of scenery like this.

We ate a huge dinner with her huge family around a suitably huge table, helping ourselves to piles of home cooked food, sharing stories via awkward translations, drinking strong home brewed spirits, immediately regretting it.

Only one of them spoke our language, but we all understood one another perfectly. 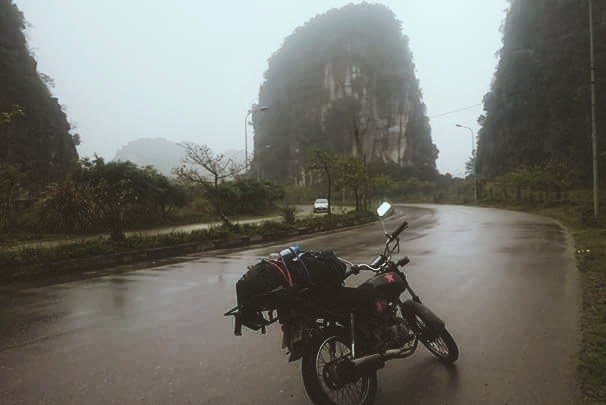 There is freedom in complete solitude.

A week later, I found myself alone in Hanoi. My friends had gotten tired of the cold and rain that they had come here to escape, and put their bikes on a coach to take them to the south of the country quickly. I couldn’t blame them, but determined to stick to my guns, I waved goodbye and made my own way.

The traffic coming out of Hanoi can drive you mad. Fumes choke your lungs, animals stroll across the road. The rains steamed up my visor, and I was constantly jostling for space, weaving between lorries, trying not to stall.

I felt scared driving out of the city. My bare fingers were numb, and I gripped the handles of my bike, named Diana, tightly, to stop my hands from shaking.

When I had broken free of the traffic, I felt nothing. Poor visibility, sodden tarmac and reckless drivers demanded all of my attention. All that occupied my head was what I was doing at that precise moment. I could not afford to think of anything else. It was a liberating state of mind.

At last, I turned off the main road and into Ninh Binh national park. The roads were suddenly wide, smooth and empty. Islands of limestone rose out of the emptiness, encircled by rice paddies. The beauty of the people, the violence and tragedy of the country’s history, felt woven into the geography of Vietnam.

And now I felt everything. Soaked through to the skin, still shaking, I drove on, laughing and whooping into the emptiness. 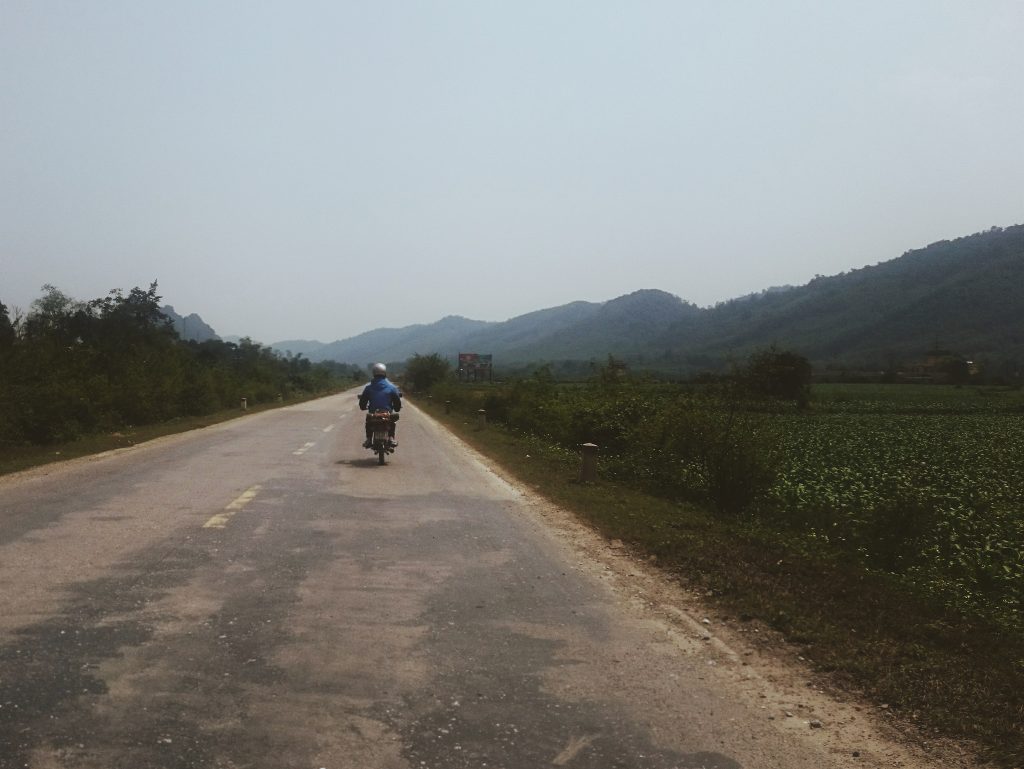 I arrived at my hostel soaked through to the bone. I cleaned my bike, had a shower and went to write by the bar.

When the day had faded into darkness and cicadas began to accompany the reggae music that wafted around the bar, two motorbikes pulled up into the driveway. I paid little attention to the new arrivals as they walked inside to check in.

Later, they came to eat, drink beer and chat with the travellers gathered on the patio. Two gentle giants of men from Norway, they had travelled through Scandinavia, Russia, Mongolia, China, Japan, and still had a long way to go. We struck up a conversation, talking about language, places, the simultaneous beauty and abhorrence of the human race.

By the time we went to bed after hours of conversation, I had decided to join them on their journey south. They had an enticing energy behind their eyes. I wanted to follow it.

Over the next week, we rode together along miles of empty tarmac flanked by mountains, often breaking down in villages where nobody spoke a word of English. My days with the Norwegians would be some of the most challenging of my trip, but from them emerged two of my most cherished friendships.

We enjoyed each other’s company, pausing to talk and enjoy the view once in a while, but always with one eye on the horizon. A lot of road still lay ahead of us.

George Billinge is a second year Classics student at Durham University. He is also a veteran hitchhiker, writing to restore his faith in humanity. Read more of his incredible journey on Instagram @ differentcars_georgebillinge