The Tale of the Dog and the Raven 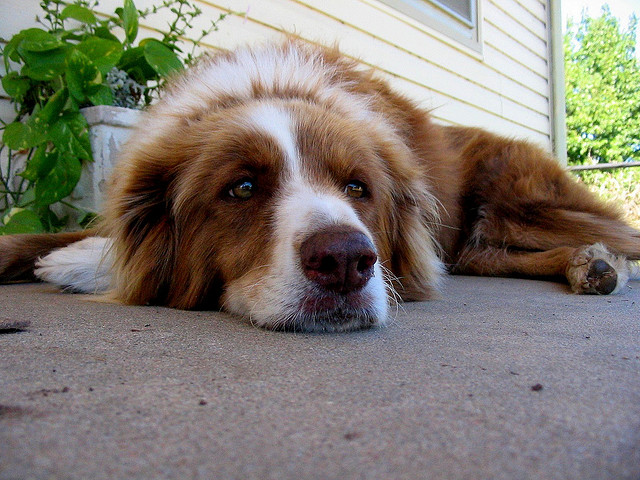 The Dog woke to find a cold morning. He had no knowledge that he was a year old, but he knew that he was quick and agile; more so than he had ever been. He got up and stretched before walking slowly over to the water bowl. He drank for a minute and then looked back at his mother. She was still asleep and so he decided to leave her be. He strolled around the house until he reached the back door. Outside lay a garden, bigger than the entire downstairs of the house. It had a small patio which led on to a wide expanse of grass and along the sides were small bushes. When the air was warm and the bushes were bright, the Dog had run in and out of them with his mother. He had enjoyed himself immensely.

The Dog scratched on the back door a couple of times and then sat down. It was customary to sit after scratching on the door, mother said. He looked up at the small hole through which he could see light and started to wag his tail. After a couple of minutes the scene had not changed and so he scratched again. For the second time, he sat and looked through the window. Before long, two feet pattered evenly across the tiled floor behind the Dog and a hand stretched over the Dog’s head, opening the door.

He ran into the cold morning with his mouth open and his tail wagging. He sniffed the air and smelt a familiar smell: bird. A Raven was awkwardly walking across the other end of the garden, seemingly intent on the ground. The Dog ran at the Raven with his mouth open, but the bird left the ground effortlessly when he was still a number of paces away. The Raven looped in a circle before landing on a nearby branch.

“You won’t catch me!” exclaimed the Raven.

“I am too vigilant. I saw you when you were still a number of paces from me. You won’t catch me!”

“You won’t catch me!” repeated the Raven.

The Raven then stepped off his branch and caught the air with his wings, propelling himself far away.

The Dog watched the Raven fly with a smile on his face.

The Dog woke the following morning and crept from his mother’s side. His eyes searched for the water bowl, where he refreshed himself. After which, he stood as tall as he could. His jowls were still dripping as he pushed out his chest and breathed in. He shook his head and focused his eyes.

He strode towards the back door with purpose. One powerful scratch was all it took to initiate movement above. He crouched in anticipation, his hind barely touching the floor. Two feet pattered evenly across the tiled floor behind the Dog and a hand stretched over the Dog’s head, opening the door.

He was out like a greyhound. His powerful strides took him further and further down the garden. He felt the wind rushing past his ears and the firm ground beneath his feet. He was approaching top speed and was only a stride away before the Raven caught the air and soared out of his reach.

The Raven circled the garden again before coming to rest on a nearby branch. He inspected the Dog with an amused expression.

“I can catch you,” said the Dog menacingly.

The Raven laughed in derision.

“You won’t catch me! I am too fast and agile. I am too vigilant. You are too slow and fat!”

Two feet pattered evenly across the tiled floor behind the Dog and a hand stretched over the Dog’s head, opening the door.

He was out like a bullet. His paws pounded the ground with great pace and perfect form. He was only a stride away before the Raven caught the air and soared out of his reach.

The Dog knew he was getting closer. He smiled at the Raven.

But weeks passed and the Dog did not catch the Raven. He sprinted out every morning and every morning the Raven caught the air and soared out of his reach. He sprinted through the house during the days and worked himself hungry and tired. The following morning he would try again and the Raven would slip his grasps. Once more he would be subjected to the Raven’s mocking.

Soon, the air started becoming warm and smells appeared that the Dog recognised but couldn’t place. On one such afternoon he wandered around the end of the garden. His nose was sparking new smells in whichever direction he turned his head and so he was contented to swing it from side to side. His eyes were closed and his smile was full.

The Dog was behind a bush when another smell entered the garden. The Dog smiled to himself and crouched down, out of sight. His paws rested on the soft mud next to the bush. The smell wafted across the garden in a nonchalant fashion, stopping here and there, before it arrived on the far side of the bush.

The Dog pounced and tumbled his mother over, taking her off guard.

Yelping in fright, his mother quickly bounced to her feet and chastised her son. He had got so big.

Two feet pattered evenly across the tiled floor behind the Dog and a hand stretched over the Dog’s head, opening the door.

He was out like lightning. He raced to the nearest bush before slowing his pace. He crept stealthily alongside the fence before he reached the final bush. He dipped his shoulders and dug his paws into the mud.

The Dog’s nose flared as he exploded from the bush. He reached the Raven in three large strides and completed his final step as the Raven pushed off of the ground. The Dog caught the Raven in his mouth and bit straight through him, severing him at the neck and hips.

The Dog slowed down and panted.

The following morning, the Dog rose from his bed early. He wandered through the house towards the back door. The door opened and he stepped into the warm sunlight.

“I caught you, Raven! I caught you!” he called to the far end of the garden. The Raven, however, was nowhere to be seen. The Dog trotted around and looked at all of the Raven’s normal perches. He was not there. The Dog skulked back inside.

“I caught you, Raven! I caught you!” he called. There was, however, no Raven. This saddened the Dog. He returned to the house.

Over the next days, the Raven did not once return.