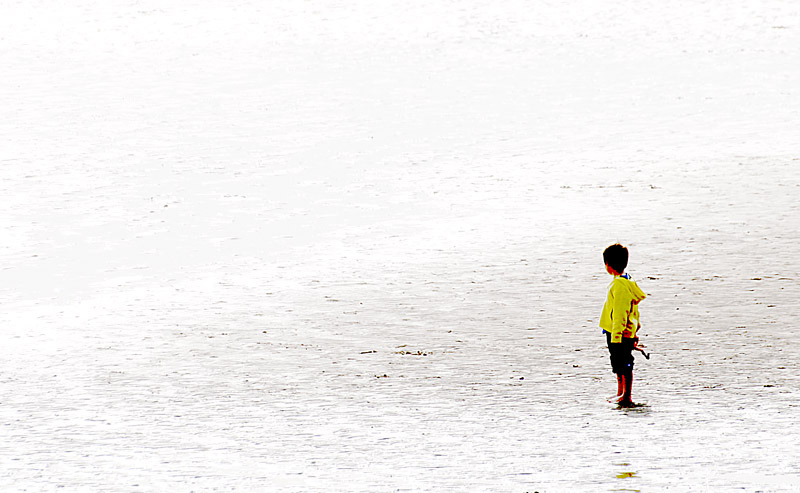 “I paused some distance away, unwilling or unable to walk closer.”

This close to the sea the thunder of the waves was almost deafening, but his voice carried through it, a reverberation that I felt rising up through my bones, rattling in my hands where they held the rope.

My back screamed as I bent with the rope and took the strain, the weight seemingly impossible. He grunted too, and I heard another splash of water. Against all sense, however, the boat was moving, and together we hauled backwards, pulling it after us. The prow rose up with us, dragging sand before it. As the aft came out of the sea I saw water sloughing out of the sides too, through rents cut in the flanks.

I do not know how it happened, but we pulled the boat out of the sea and up the beach. Some part of my mind registered a tearing sound as I gripped the ropes, but I heaved on, arms singing with the pain of the weight.

And we were done. The forefoot rested against the foot of the dunes, which the fisherman and I had unthinkingly climbed in our struggle. My eyes were now level with the lantern on its pole. Looking down I could see the boat was filled with lobster pots and lines, all in disarray. Shaking with the exertion, I lifted my hands, turning them over. As though it had waited until I saw it, pain stabbed through my palms, a pair of searing lines that were so cold they burned. Tatters of gloves hung around my fingers and wrists, but across from the ball of my thumb the skin was exposed, and burned white from the rope. I do not care to imagine how it happened, for my hands had at no stage slipped in such a way as to receive a conventional rope burn. Some part of my brain told me that it was from the cold of the rope, that it was mere contact that did this, not the exertion, but I did not listen. Turning my head to the sides I saw that I was now stood on the dune at the foot of which rested the charred remains of an old fishing boat, but I could not see them, even by the light of the lamp. Questions were bubbling in my mind, an icy suspicion and fear forming beneath them, when the heavy hand again clapped on my shoulder and I turned to look up at the man who I had helped.

His face was dark, hidden beneath the hood of his heavy overcoat, but I saw that what I had previously taken for gloves were in fact just his hands, swollen and black, the fingers bloated like sausages. Water dripped from them, far more than should have, even in the midst of the storm. There was a terrible gash in the back of one, as though it had hit something hard with great force, and from this leaked a blood that seemed thicker and darker than it should be. I was trembling, then, knowing something was wrong even if I could not put it into words. He seemed to sense my discomfort, and made to step past me to go down and see to his boat, but at that point the moon broke through the clouds, and by its silver light I saw his face.

His lips, like his hands, were dark and bloated, hanging slackly open. His cheeks too were full and stained, swelling as though something were pressing them from the inside. His nose was gone, torn away to leave a great rent in his face, from which dribbled water, running unheeded into his mouth; down his chin and neck. Fearfully I looked to his eyes and saw they were milky white, devoid of iris or pupil. His forehead was wounded, in fearful symmetry to the wound that had ripped at his nose. A long gash stretched from temple to temple, a powerful blow that had struck deep, cracking bone now visible along the edges. Oars flashed to my mind, though I did not want to wonder how one could have given such a blow. I imagined blood pouring from that wound as he sank into murky waters, running out until there was none left, until he came to rest on the seabed. I thought of depths, as cold as the rope that had burned my fingers, as heavy as the boat that I had helped him haul. I thought of death…

I knew then that if I looked I would see “White Seal” written in flowing script on the side of the boat, knew what this man would answer if I asked his name, and I ran, heart pounding in my chest and head spinning. I fancy I heard a sigh behind me then, but another part of me thinks it was just the wind. Perhaps it hopes it was just the wind.

Though I got in trouble for going out alone on such a night, and for ruining my gloves, I largely escaped punishment for I was bone-white with fear. I never spoke to my parents of what I saw that night, nor to any of the village’s fishermen. But I went out the next morning, under crisp blue skies left behind by the passing storm. As I walked out across the pristine early morning sand I could see the familiar skeleton of the White Seal, blackened remains half-buried by the shifting sand. I paused some distance away, unwilling or unable to walk closer.

But I was close enough to see a single set of footprints trailing up from the high-tide mark of the night before, up past the remains of the boat and onto the dunes. I knew that if I looked they would match my small boots, and there would be no trace of his presence, no large prints spotted with kelp. I stood there, willing the cold light of dawn to banish my fears, but it did not, and at length I turned and walked home, a tingling pain dancing across my palms.

I wish that I could lie, and say that I went to the village graveyard to see the grave of John Hedley, but I was too afraid. I do not know if I was more scared of finding something there, or of not. But, attending the funeral of Duncan Craster some years later I heard it said that a fisherman’s soul rests with his boat, and I am glad that while John Hedley’s body may be lost somewhere at sea, at least his boat made it back to the shore.