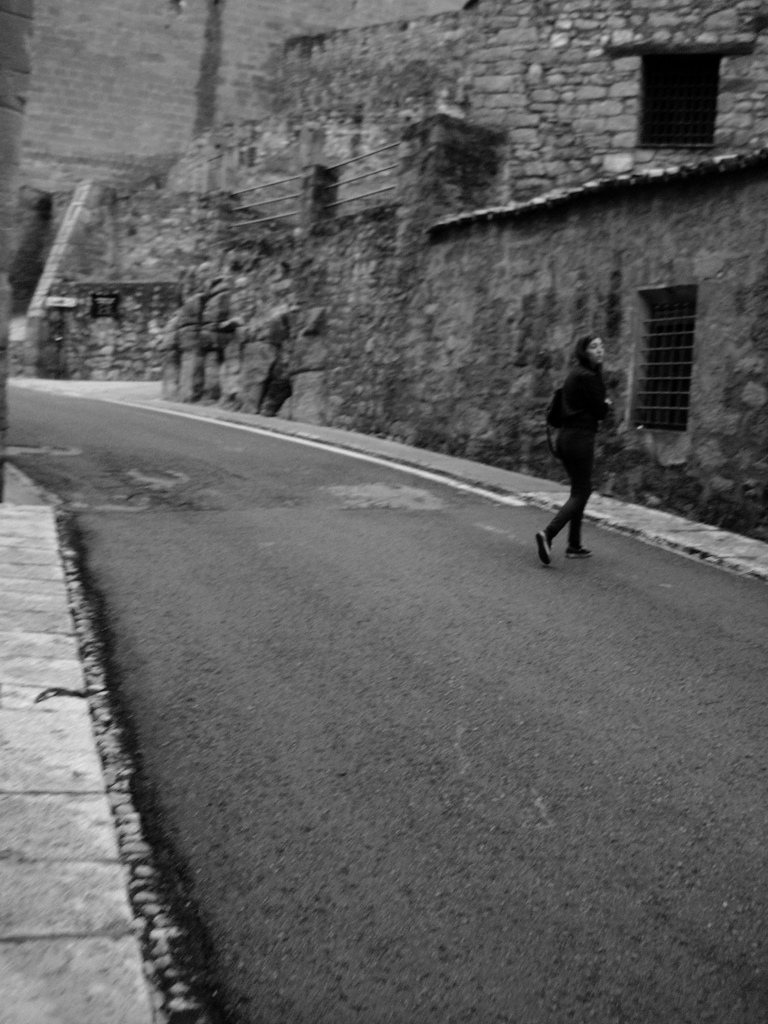 I decided that she was always doing that, that she’d walk around town with the express purpose of finding pictures to get into, just for fun… I thought, I’ll find her, maybe, and she’ll fall in love with me.

If you look to the background of the photograph, you’ll see her, slight, on the edge, in the background, and even though it’s black and white I could have told you, with almost certainty, that her dress was red. I must have invented that, because I didn’t actually remember her, not as such. But when I saw the picture in my mind, when it wasn’t before me, I filled in her colour. My family and me would still all be in greyscale, but the girl crossing the street, fifteen or so, about the same age as I was then – I could see her in bright colour as though she were alive and there before me. A red summer dress, dark hair tied up, a basket in one hand, white shoes, blue eyes turned to the camera at the realisation that she’s in the middle of the shot. In the actual photograph, black and white, she’s not turned so far towards the camera, but you can still see this vague smile in the corner of her mouth, amused that she is about to get set down forever in this family’s photograph album.

I was in the photograph, and my cousin who took it doesn’t remember seeing anyone get into the shot. When, the Christmas after, she was passing around the photos from the family reunion, she showed me the picture and I stared. After watching, for some time, the girl in the background, working out the curve of her face, the flick of her mouth, the soft curl of her fingers – after staring for as long as I possibly could, I looked up at my cousin and said, “do you remember seeing that girl?”

She took the photograph off of me. “Oh no,” she muttered. “I didn’t see that at all. What a shame that is. She’s gone and ruined the whole shot.”

But she hadn’t ruined it, not to me. She had made the picture wonderful.

I was fifteen, and the girl in the background couldn’t have been very far away from that. And she was beautiful, but that was unimportant. What mattered most was the smile, that subtle expression of personality, the fact that I thought I could find out something about her just from staring again and again at the photograph, ignoring my family, skipping past my brothers and sisters and aunts and uncles and cousins and parents and grandparents and various relatives whose relation I didn’t even know. They were unimportant. The girl crossing the road in the background was the centrepiece to me.

I was a lonely quiet sort of boy then. I lived in books, and my brothers and sisters alike all accused me of being girly. I didn’t care, and never defended myself. I didn’t speak much anyway. I went to school and came home in silence, and when there weren’t books to read, or when I tired of them, as I occasionally did, I would go to the boxes in the cupboard under the stairs, always knowing which box and which packet to go to, and stare at the photograph, at the girl in the background. I invented a whole story for her, like one out of a novel. Her name was Eloisa (you see, she had to have a pretty, intelligent name), and she was very easy to talk to and had a laugh like silver and took strange pleasure in getting in the background of people’s photographs. I decided that she was always doing that, that she’d walk around town with the express purpose of finding pictures to get into, just for fun. And she was clever and thoughtful and interesting and perfect and didn’t mind me at all, and I thought, I’ll find her, maybe, and she’ll fall in love with me.

On the way to and from school, to and from the library, I always looked for her, but I never saw her. There was no sign of the girl from the photograph, the girl in my head. She was nowhere, and at some point I think it must have occurred to me that she mainly existed only within my mind.

When I was seventeen we moved house, and I lost track of the photograph in some of the various boxes that went up into the new attic. I thought it had probably been left behind, and mourned over it, reluctant to let it go – until I met my first girlfriend, and forgot all about my lovely Eloisa in the background of the photograph.

The girl I stepped out with at eighteen for a year or so made me less quiet, somehow, and I read a few less books – or at least went on about them less – and my brothers and sisters began to like me more, as did everybody else. She ended it with me when I went off to university, and that was fine, in the end. I think I probably cried, but eventually the tears dried up, and I moved on with my life. But after that, when I made up stories about love inside my mind they focused on her, or some other girl in reality who I somehow thought I was in love with.

I was almost thirty when I met Jenny, and we got it right. I met her at a party of some mutual friends, and she looked as bored as me and, when she saw me looking at her, she pulled a face and we laughed, and that was that. Three years on we were married, and another two years later had a baby. Life went by, and I loved it.

And then, last year, when my mother died, Jenny and I, well over fifty now, grey, wrinkled, still smiling, went to her house to sort through her things. I was going through my little sisters’ childhood dolls when Jenny looked up with a start from the photographs she was going through.

I shuffled over and looked at the photograph in her hand. She was pointing past the large black and white family group to a girl crossing the street in the background, a girl who was turning toward the camera with a slight smile on her face.

I looked, and I saw. I had long forgotten the photograph by the time I met Jenny, and anyway, I had filled in the wrong colours in my mind. To my fifteen-year-old self, the girl had had brown hair and blue eyes; in fact her hair had been blonde, her eyes brown. And her name had certainly not been Eloisa. But her face, the fact that had haunted my mind for so long only to slip from it as I grew up – that face, that smile, were better known to me now than my own. I looked up slowly at Jenny, to see the girl in the background merge with the woman in the foreground.