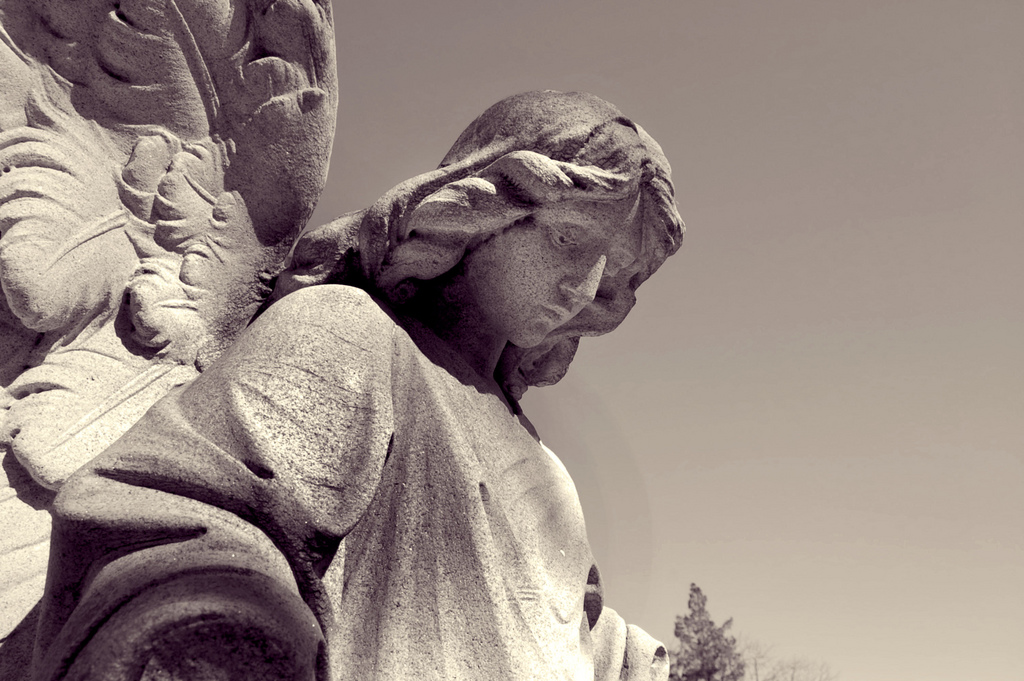 “She waits for the angels.”

In the darkest hour of the night, she hears the angels calling her. They’re distant at first, like a telephone call that’s lost part of its connection. But they get louder, beckoning her onwards and calling her up and making the end seem bearable. She wants to leave her bed and her room and this bloody hospital. She wants to fly.

On the quietest days, they just sit. Mother and daughter frozen like the Virgin Mary and her precious child clutched to her bosom. Except the girl isn’t going to touch her and the Mother has no bosom left and the child isn’t dying; she is. When they talk, the awkwardness cuts at them like a razor blade digging into their skin and oh God, it hurts.

The girl shrugs her bony shoulders and goes back to fiddling with each individual stitching on her Mother’s bed. Then the night settles over the hospital and the child goes home and doesn’t come back for a very long time.

On the final day of every week (Sunday, wasn’t it?), her sister visits with a different bouquet of flowers and a fixed smile and a hundred irrelevant stories to scare away any awkward silences lurking around her sickbed. She puts the flowers in the same vase and sits in the same chair and starts with the same irritating ‘Well…you’ll never guess…’ But today she sidles in with a box of tissues and a box of chocolates and a big invisible box of confessions. She sits on the edge of the chair and grasps her hand and casts furtive glances at the other occupants of the room.

He’s left me.
What happened?
He thinks I had an affair.
Did you?

The sister sits up very straight and purses her lips and looks disapproving. Then, when the woman doesn’t smile, the sister shakes her head so fast that it’s almost one big blur. The woman isn’t convinced and doesn’t want to let the blasted cancer leave her sister behind like this.

What did happen?
Nothing.
Nothing?
That’s what I said.
Okay.

Silence again and a rustling as the sister rearranges the flowers with trembling hands and a faltering tune humming through her pinched lips.

He stroked my knee.
Your knee?
That was all.
Right.
You don’t believe me?
No.

The sister sniffs and casts her eyes into her box for her next topic of conversation and pulls out the girl.

Somehow the woman knows who she’s talking about and casts her lifeless eyes into the worried ones of her sister.

No?
Why won’t she speak?
I expect she doesn’t want to.
No. True. Sorry.
She should come see me.
The sister shifts awkwardly. Yes. Okay.
Does she want to?
No, no, not really.
Okay.The days pass and the daughter doesn’t come and doesn’t come again and the Mother wishes with all her heart that she would. The angels are closer and the end is creeping up on her and she misses her child. Her husband visits every morning before work in his suit and tie and a harried expression on his lined face. He fixes on a cheery smile and then spends the rest of his visiting hour sobbing into her lap.

It breaks her heart to leave them behind but its okay; she doesn’t need her heart for much longer. She wipes his eyes and clucks in a Motherly fashion and sends him on his way. Then she whispers to herself.

The daughter comes at lunch and her school uniform is messed up and her eyes are wide as she takes in the tubes and the heavy machinery and her grey skin.

I’m a robot, she chuckles.
The daughter doesn’t smile. Are you going to die?
Probably.
Soon?
Very.
Okay.
Sit down?
No.
Okay.
Thanks.

There’s silence but the Mother no longer cares and she draws her daughter to her scarred chest and kisses her hair.

The angels need me.
Can I come with you?
No.
Why not?
Because you mustn’t.
I want to.
Why?

No answer. The girl shrugs and buries her face into the sweet smelling sheets and listens to the faint sound of her Mother’s beating heart while it lasts.

The Mother pretends that each word doesn’t hurt her and falls into a burning silence.

The last part falls around the morning. She watches the sun rise for the final time and thanks God for letting her see it once more and then she waits for the angels. She watches her child sleeping across her chest and she kisses her goodbye. Then she goes to the next destination on the map.

The child wakes. But the Mother has left and she must go on alone.