The Ink-Haired Horse and Other Poems 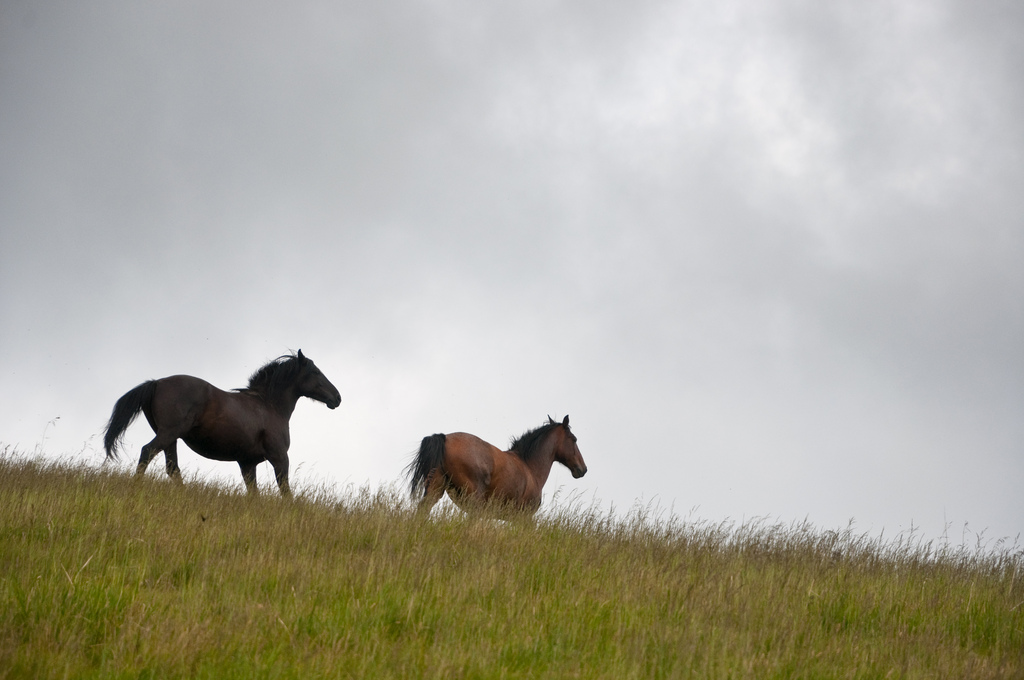 “a pack of horses wildly crafted with nature’s elements…”

Stars shadowed the darkened fields
with grimly enchanting beauty.
There, splashing the reflection
of the ivory moon,
are a pack of horses
wildly crafted with nature’s elements:
water, fire, wind, and earth.

Storming, their hooves thundered
the rich, untainted soil of motherly earth.
Amongst them, the king stallion raced,
sheer simplicity of speed,
its hair ink-black,
lightly sparkling by moon’s beam,
seemingly covered by a layer of dashing gold.

Ink-black,
the colour of undaunted power,
and of Hades’ realm.
The long, ruby red grass danced in rubarto,
declaring the death of the king stallion,
back legs pierced by a hunter’s gun.

A pony, hair of the night sky,
licked the wounds of the king stallion.
Slowly, without haste,
all the time in the world…Moonlight’s Sonata

On the nights of hazy moon like this,
She closes her eyes and sometimes,
She thinks about him.
Her fingers weaving through the world of creation,
She was compelled,
Compelled to compose this sonata,
This encounter with moonlight.

Perhaps it started with truth or dare,
Or that stilled moment when he said her name,
Reminding her of beautiful kindness,
A glimpse of light in that cruel world.
Perhaps it reached its forte,
When he passed his half-bitten cookie,
Half joking, half teasing,
His smile gently brushing away the stern winds.

Sometimes he reminded her of Apollo,
The god of music and the golden lyre.
His soft amber golden locks,
Lights up the pale midnight sky,
And fires up a passion for song.
Sometimes he reminds her of a child,
A boy with his charming devilish ways,
He’s always giving what he can
And plays whole-heartedly everyday.

But everytime something stays the same,
The feeling fuzzy that warms the heart.
His bright sun-lit smile never fails,
To sing of strawberries and cream,
Cinnamon spices and everything nice.
Everytime he can make her smile,
Her eyes soften with his goofy accent,
Her eyebrows raise with peals of laughter.
Once she thought,
If she could steal one thing in the world,
She will steal his smile and hide it away.

But he has another jewel as well,
A polished diamond that haunts me still today.
His voice must be gifted by the muses,
Every note is an angel’s gift
And every song is the perfect caramel.
Not one singer that she has heard,
Matches the sizzling feeling
His voice does to her heart.

And on the day they said goodbye,
She couldn’t bear it and melted away.
The touch of his hand on her arms,
She still remembers till today.
The world is full of ‘ifs’ and ‘perhaps’
But she knows clearly in her heart,
That all the silly things she’s done,
It will never ever be repeated again.
These lovely golden memories,
Tied with a ruby ribbon in an ornate box,
Will keep till the day called forever.
Whenever she sees that mud-painted face,
It will never fail to make her smile.

Then the hands stopped and she thought,
It’s time to put childish thoughts away.
It’s time to twinkle others’ lives with sparkle,
And give them some essence of the world
With a poet’s art.
Although we have not the skills of mechanics and doctors,
We have the skill to think and create.
With that, we have unlimited power,
To touch another soul to the good and beautiful,
And with our pen let them stay.

Read this as a token of gratitude,
A small piece of my heart
From the glowing moments of youth.
As the dove flies lightning
Coated by the midnight sky,
This poem will be the Northern star,
To guard and protect you
Through your long weary days.Yearning

Rivers soothingly flow to the ocean,
Strong and steady,
Its rhythm evenly paced
Like the caress of a callused hand.

Within that whirlpool of sound,
Tides of golden waves splash and fall.
They are stars billowing in silver fleeces,
And Waves of the heart

Smash violently to hard-edged cliffs.
Roaring, its beating is the sound
Of a caged soul,
A black horse wounded in empty fields.

The horse has wandered north and south,
Every valley, every field,
It flung its mare and bravely roam past.
Dews of tears

At each instance,
Falling to the salty seas.
Unstoppable longing all along,
Just to find him.

The Blue Moon sings a melancholy song,
He rode past, never looking.
The horse stood, tears reflected
In the pale starry skies.

Now she rests in the lighted fields,
The air a dark blue, woollen cape,
Wraps the horse warmly.
The horse and the midnight sky

Becomes one.
Love of the skies, the singing swans,
Comforts the wounded horse,
Trying to fill the void in her heart.

Rivers can fall and flood it,
Light can glow and touch it,
Hands can rise and protect it,
But it remains half-full.

There she roams,
Knight of Night’s realm.
Fearless, steadfast,
She will kiss her wounds till
Her hunter arrives.