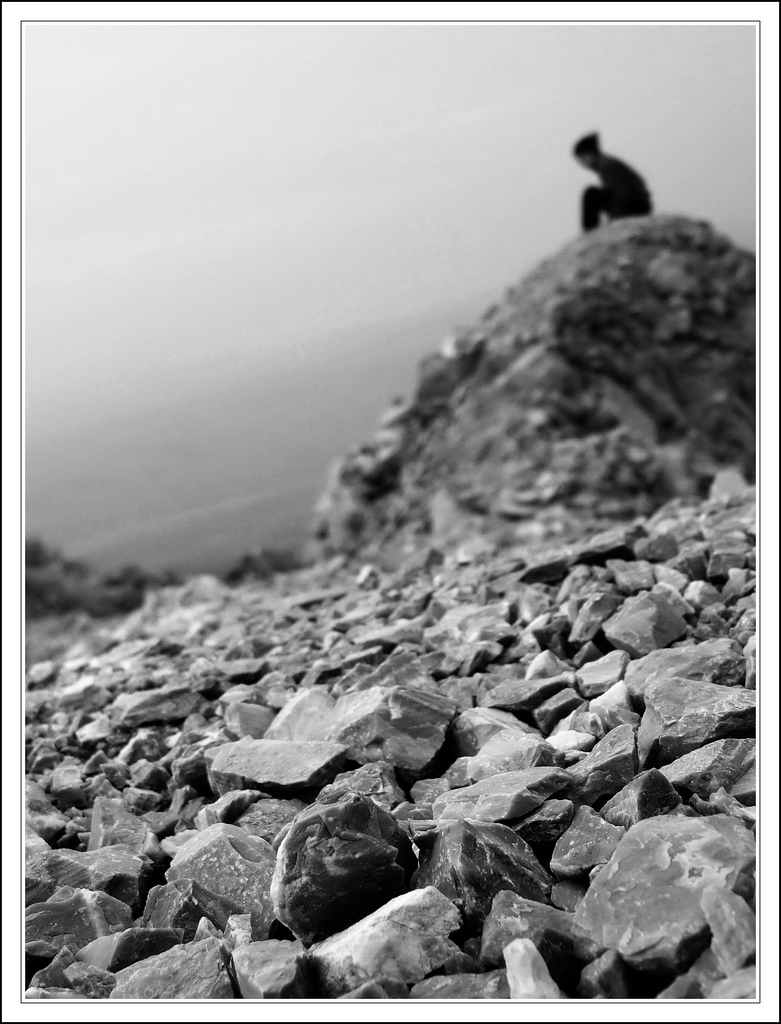 “He had come for a epiphany, to find something in the hills that he could not find elsewhere.”

A paradisical English countryside extended for miles beyond John, miles more than he could ever remember seeing, without skyscrapers and bridges and roads to block and define it, without anything to tell it when to stop. He stood alone, at least a mile or so from his parents’ house, staring determinedly at the expanse in front of him. Only the wind moved. The grass faded into a painted green, and the fences, hedges and other details of the landscape blurred as the sky darkened. In the twilight, it could have been an ocean he looked upon.

He was unused to the cold, and it bit through his coat and scarf into his skin more than he wanted to admit to himself. Nonetheless, it was refreshing, bracing; a change of environment that John needed. You could breathe in these hills. There was space to stand and think. It was why he had come.

The land continued to grow darker, the green giving way to black. The fences succumbed as well, and the hedges, and the trees. Night kept drawing closer, so slowly the change itself was imperceptible. For the past hour, John had realised frequently in starts how much darker it had become. He convinced himself to stay out a little longer each time.

He had come on the train from London earlier that day. While he was happy to see his parents for the weekend, he had made it clear that what he really needed was some time away. A weekend out of the city. At twenty-six, the novelty of it had worn away. The pleasures too, had dulled like an old knife, turning from vivid, exciting experiences into endlessly repeated routines. The bars, restaurants and cafes all became uncomfortable and awkward places, until the discomfort reached such an intensity it bordered on being painful. An understanding had hit him then. Drink and food and polite socialising, it all numbed him. He was practically suffocating under all the stimulating activities that he took part in, the same as any other young, successful man in the city. John had known then that he needed to get away and find something real. Something that would really reach him.

The hills he had climbed were not too steep, but rose seemingly without end, making the ascent a hard one. He was not ready for the exercise; it had been years since he had last played a sport, and he had puffed and panted on his way up. It was good though, in a way, forcing some life back into his limbs. The effort also held his focus completely, and it was a change to concentrate on something so simple. Besides, his parents had been right, it was a wonderful view.

His mother and father understood, of course. They had lived in the small countryside village for years and still loved the place and its charms. John had needed to go to the city; he was a young man after all. He had done very well too and they were proud of him. But perhaps he was tiring of it now. He might move a little further out soon, even commute in from a nice house if he met a nice girl. Still, it had surprised them how eagerly and quickly John had set off for a walk after his long journey there. They knew how stressful his job in the city was though, so they gave him space and put his dinner in the oven to keep warm.

What John was looking for, he would not have been able to say. After he had realised that he needed to get away, he had not given it much thought. As much as it was a cliche, he had genuinely heard the siren call of the countryside that he and his friends had joked about only a year or two before. Something had made him certain that he just needed to get there. Once he was free of the urban jungle, and reached the real thing, the nature he had never taken notice of before, he was sure he would feel better, and things would be alright.

At first, he thought this was happening. The beginnings of peace and calm had washed over him as he stood there, tired from his walk, taking in the scene in front of him. Then, at no precise moment, it had not felt quite right, and he was at a loss to describe what was wrong.

By now, the last hints of amber marbled with darkness had faded from the horizon. It was a moonless night and John could only see because his eyes had had time to adapt to the change. He saw the night-covered landscape clearly. And that was all.

He had come for an epiphany, to find something in the hills that he could not find elsewhere. So he had waited patiently, waiting for it to come. It was only when night had completely fallen, that he saw they were only hills, and nothing more. Nothing was reached in him and they gave him no rush of clarity or understanding. They could only offer him what he could read into them, and when he looked inwards he came to the same wall that he had found in the city. He may as well have been there again. The scenery changed nothing: it was still only him there, and him alone.