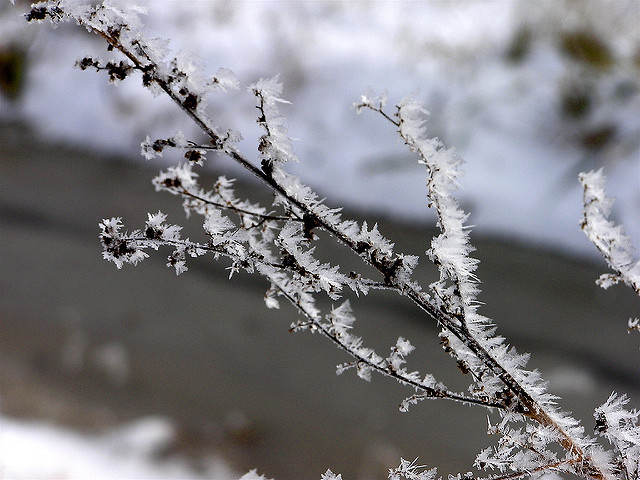 A short story by Riana Dixon for our Christmas Competition, inspired by cultural ideas and stories of Jack Frost and the Russian fairy tales of Snegurochka, or The Snow Maiden.

Another December night. The temperature dipped, mercury tiptoeing down the thermometer as the Sun was submerged in shadows. Frigid darkness settled on the earth, an icy blanket settling over the shoulders of hilltops and houses.

The Sun tugged away the last remains of warmth and his absence gave rise to a new being – Frost. Slowly awakening, the icy chill lifted her body and gave it form: an invisible figure carried through the wind, making the very air shiver.

Frost’s fingertips tingled at the sheer potential of what she could bring into being that night. This planet looked so dull, sheathed in darkness as it was. Only the occasional burst of colour from a set of twinkling Christmas lights, wrapped around a tree or draped across a house, brought a slight glow of joy to Frost’s heart. She wanted the whole land to shine, filled to the brim with tiny, glistening lights until it mirrored the star-clustered landscape above.

She walked through fields and forests, freezing ponds with the lightest touch and following the reflection of moonbeams that shone across the glazed water. As she breezed past, the grass beneath her grew crisp, encapsulated by tiny spikes of frozen dew, framing their edges in brittle spikes of silver. She travelled innumerable miles in a breath of wind, swirling through naked trees and giving them new beauty in a coat of iridescent fractals. All of nature was Frost’s canvas as she weaved her creations and traced diamonds across the surface of the world.

She did not forgo a single detail, lining each silken spider-web with miniscule crystals, tracing the veins on leaves, capturing every needle of the pine trees with a numbing exhale. As she reached places of civilisation, Frost ensured that the drab grey of pavements and roads would be lifeless no longer – she swooped over the tarmac and left behind her a road that glittered like the speckled sky above.

Everywhere Frost flew she spread beauty and light, and the sight of the luminous world gave her a sense of gratification. She only wished that others could appreciate her art.

There was a small window – in the early hours of every morning – when the Sun would slowly awake, his gradual ascent seemingly pulling people to rise with it. Frost’s creations basked in those first tentative rays, looking all the more radiant as they reflected and scattered the light. Watching timidly from her seat in the wind, Frost wondered if today someone might appreciate her creations.

But, with the remnants of sleep in their eyes, those people were blind to the glistening world around them and saw only an obscured car window and dangerous roads. People slipped down her gilded pathways, cursing the existence of Frost. She sometimes wondered if she was doing the right thing, when her efforts only caused people problems…

It didn’t physically hurt her when they destroyed her creations and forced them to melt before their time. Frost couldn’t feel pain in that way, yet in her chest she felt so empty; she wished she could feel something other than the bitter chill of isolation. But that was impossible – she was a being of ice. She wasn’t designed to feel the warmth of kindness and it was her destiny to live her days in the desolate world of ice.

Only the radiant beauty of her creations brought Frost the hope that if she created a perfect world of ice, one day someone might find beauty in her structures and realise the sublimity of seeing the world’s imperfections erased by the touch of Frost.

On Christmas Eve Frost worked a little slower, heard the wishes of young children drifting towards the sky and felt consumed by guilt. Her work was not the white Christmas the children were yearning for, and she knew Snow would not be visiting them that night. Her efforts could never bring the same joy that Snow did.

Glowing warmth shone from homely windows, looking so inviting that Frost unconsciously moved closer. She saw loved ones existing in their individual universes, each house a microcosm of love and happiness. As she drew close to the windowpane, fantastic spirals of ice twisted out of her fingertips, glossing the window in exquisite patterns of ice; Frost was too lost in the scene to notice.

She yearned for company, so desperate for warmth that she created her own: a burning longing filled her being as tiny icicles dripped from her face, onto the frozen ground. Frost would give anything to have a person smile at her the way this family smiled at each other, to feel a hand on her own and to know what warmth truly felt like.

The following morning Frost watched and waited, somehow still hopeful after weeks of isolation, since she awoke that year on an unusually chilly October evening. The Sun gleamed in the flawlessly blue sky, his rays not yet harming Frost’s work as they glistened and refracted off the ice crystals.

Frost saw a child rush outside, another tentatively trailing after them. Their parents quickly followed, clutching scarves and gloves and instructing them to wrap up warmly. Frost waited for the grumbling about her bitter cold and icy pavements to begin, but it never came.

Stuffed full from Christmas dinner, warmed by fluffy jumpers and the crackling fireplace, the crisp winter afternoon was like a breath of fresh air, awakening their minds and bodies from the comfortable lethargy of the day.

The family ambled through the village, children dramatically exhaling as Frost captured their breath and condensed it, turning it white as it drifted through the air. She playfully nipped the tips of their noses pink and they did not pull their scarves up higher; the youngest child laughed, “Mummy you look like Rudolph!”

Walking along the grass, the children enthusiastically jumped in their wellies to hear the ice coated leaves crunch underfoot. The world around them seemed to twinkle invitingly, and they were awed by the beauty of Frost’s creation. They saw the sparkling paths, like a road to a magical fairy realm, and the swirling patterns that followed the grooves of the trees, the illuminated spider-web; everything seemed to dance with light, no matter where they looked.

Watching the glee of the children and the fond glow of their parents, Frost noticed an unknown feeling within her, seeping through her entire being with a molten liquid warmth. It felt strangely like… love? Frost felt as though the Sun himself was shining bright from within her as she joyfully danced in the wind, swirling around this wonderful family.

As she twirled and beamed, Frost became aware of a softness within her. The frigid icicles within her were thawing from the warmth of love that she felt: her ice sculptures crumbled, her fractal patterns began to disappear and she felt herself grow fainter… the warmth she had so desperately desired to feel had finally reached her heart…

It was not in Frost’s nature to feel warmth, but the glow brought her such tranquillity that she allowed herself to melt, her creations still sublime in their elegance, even as they thawed.