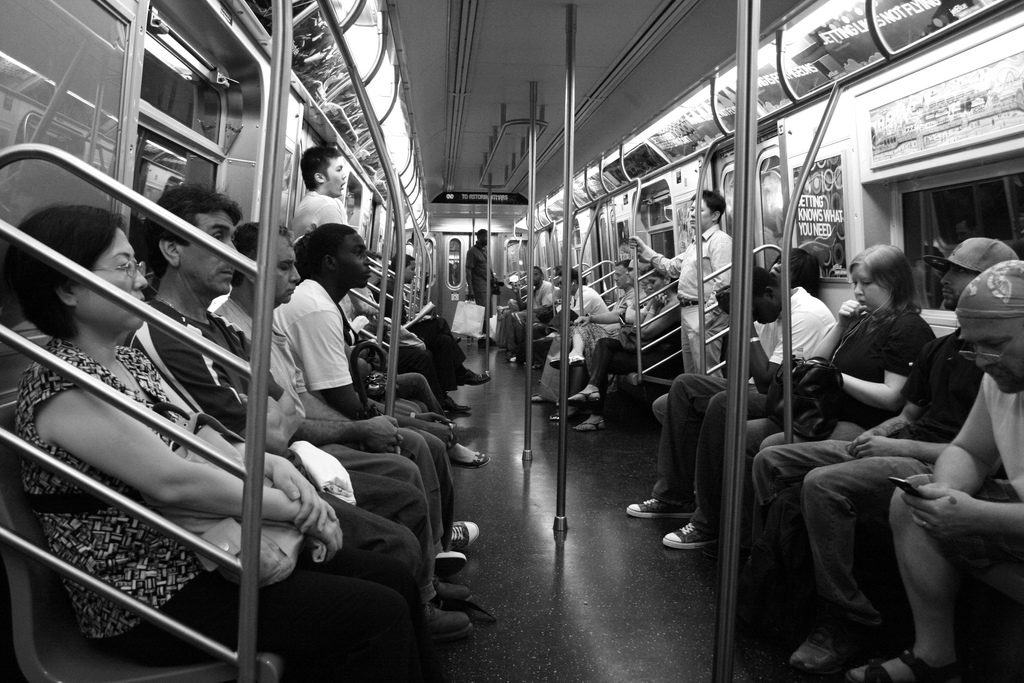 ” I found myself sat on a train full of strangers…”

The Wisdom of Crowds

I wanted to rebel, don’t all teenagers? The problem was my indecisiveness. I had a pound
of it for every ounce of rebellion in me. Lucky then, that I lived at the end of the country, the end of
the line. When I decided on a rebellious whim to catch a train, I had no choice of direction to delay
me.

Having bought my ticket to the service’s destination with no intention of ending my journey
there, I found myself sat on a train full of strangers. Of course, this isn’t uncommon for travellers,
but being rather shy I never found it a comfortable situation. What did I do now? I looked around
me for inspiration, some sign or guiding beacon.

The posters up on the walls and windows held no clues. I listened to the service
announcements with an abnormal amount of concentration. Nothing useful came of it. I scanned
the newspaper left on the seat next to mine, but it was all mundane.

“Rebel!” my adolescent instincts cried nevertheless, and so I glanced around, moved out
of my comfort zone and had soon tapped four strangers on the shoulder. The first was the most
nerve-racking, as I hastily constructed a premise to talk to them. I was doing some research, I
claimed, and could they please write down the first word that came into their head? I held out a
battered notepad I’d stuffed in my bag before leaving the house, already questioning my sanity.
Getting strangers to write down a word was hardly the most normal way to interact.
The tired-looking businessman I’d asked first paused, lacking imagination or perhaps just
wary. Assuming the former, and worried my bizarre game would fall flat, I prompted them,
“Just think of a sentence, and use the first word, if that helps” My voice couldn’t have
shook more, so terrified as I was of being mocked or even assaulted for my interruption.“Get”
they scrawled. I strongly suspected the rest was “away from me”, so I did, pretty quickly.
I persevered though, and headed towards an elderly man engrossed in his newspaper. Why I had a
death wish I didn’t know, but it would’ve been fulfilled if looks could kill after I disturbed him from his
reading. After hearing my research line he also drew a blank, so I suggested this time something
from the paper. Glancing down at the bold lettering of a holiday advert, he wrote stiffly:
“Offer”.

I still had little idea where this charade was heading, though I was now determined to get
something worthwhile from my rebellion: a chat with a cute brunette was now my aim, she became
my final target. Before that though, so as not to look like I was crossing the carriage to talk to her, I
stopped halfway along at a moody teenager, his headphones blasting. I immediately regretted my
choice- why did I keep choosing the least friendly people on the train?

Too late now, the hooded youth had lowered the volume enough, presumably, to hear, and
was glaring up at me impatiently. For a third time I recited my story, repeating the first two answers
in my head as I did so. Just as I finished the tale, something clicked, and I launched into a prompt
without waiting to see if he had anything in mind.

“Could be any word, make it as complex, or as simple, as you want” It was almost a taunt,
hopefully keeping him the safe side of hitting me. It worked. In the stubborn, defiant manner I’d
hoped to provoke, he sneered at me, grabbed the pen I offered and scrawled:
“The”.

Perfect. Now the brunette. My brief for her was going to be ‘whatever interests you’ in the
hope she’d give me something to start a conversation with, but now I deviated, more excited in
manipulating her even than dating her.

“Maybe something around you, sort of like ‘I Spy’” I said with an attempted smile. ‘Be as
literal as you want’ She blushed slightly, it barely registered, such was my anticipation for her single
word:
“Train”.

I couldn’t control my grin. Probably mistaking it for a precursor to an awful chat-up line, the
brunette looked up at me expectantly, but I snapped shut my notebook and near-skipped to the end
of the carriage as a foreign station beckoned outside, eager to carry out the unwitting orders of four
strangers.