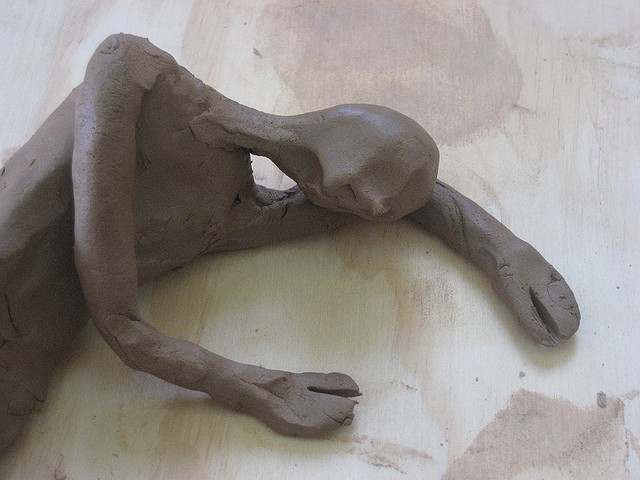 “I live… vicariously… is that it? It must be. I do that. As much as I can. Not having a face… or fingers… does prove to be an impediment most of the time.”

You turn it on, then off, then on again. You don’t seem to realise what it’s doing to me. So you keep checking if the batteries are working alright, if the light bulb is bright enough, if you’ve placed it at the right angle to allow for optimal viewing of the work on your desk. The rest of your room is bathed in the deathly darkness of night. You work at night – even though you should be sleeping – while gorging on chocolate, coffee and caffeinated fizzy drinks which I’ll never taste. You don’t care. As soon as the sun sets, your productivity kicks in and suddenly everything makes sense inside your skull.

I don’t know. I just know I see you when you’re working because it’s when I’m most alive. Also, ever since you’ve gotten that desk lamp that hangs upside down like that, my energy levels have increased. I can almost reach out for your hand when you stretch it across the polished surface. But I never quite make it and you never quite notice. Then the light turns off and I’m left in some of the most awkward positions I have ever been in. Well, as far as I can remember, although I’m pretty sure some of those memories might be yours.

I don’t wait for you to get back. I don’t need to. I take whatever I can and run with it. No I don’t. I can’t go anywhere. I run with it figuratively, as you say; I remember the things you do, the way you do them, the sound of your voice and the spark in your eyes and I incorporate them into my daily routine. I live… vicariously… is that it? It must be. I do that. As much as I can. Not having a face… or fingers… does prove to be an impediment most of the time.

There’s a goal that I’ve found amongst the solitude. It was lying there the whole time, waiting for me to discover it, my little damsel in distress. Getting to the light. That’s what I need to do. If I get to the light everything will be all right and maybe I’ll be real like in that story about the wooden boy you were reading out loud to yourself the other day. Or maybe you’ll notice I’ve been moving, get frustrated or scared and fling me against the wall and then I’ll turn into a prince like that frog. I’m sure you wouldn’t mind. I can feel your need for a companion; the need is what drives me. Because maybe I can be that something that you need if I try hard enough. You might even be proud.

Tonight’s the night. The perfect night. You left the light on. It must be some sort of divine sign. You care about me, you must do, and now you’ve given me a chance so I’m determined to show you by morning that I can be everything you need me to be. There’s just enough energy to make it closer.

Didn’t you read me a story like this once? A boy with wings who flew towards the sun. I remember, the way you thought of the sun; that big great mass of heat—so much energy, so much to strive for.

I started moving as soon as the door of the room closed behind you. My feet have always been strangely shaped, pointed, just like my hands, and they bent awkwardly when I placed weight on them. I continued to drag them along, nonetheless, ever closer to the lamp.

Closer and closer and closer until I was standing successfully underneath the metal dome encompassing the bright, hot light bulb. I expected it to be hot because you did. Hot was warm but hot could hurt. Hot could be cold if it was too hot. But right now, hot was what I wanted because who knew what could happen if I got as close as possible? Great things could happen. You wouldn’t have left the light on if it wasn’t so.

Icarus was that boy’s name and he flew to the sun with wings of wax.

My plasticine arms stuck to the metal as I grabbed onto the lamp. Not right away; it took a fair amount of tries; but eventually it happened and I managed to pull the rest of me up as well. My arms were still stuck so I had to give part of them up in order to make it closer to the light. I tugged a bit – it was all I had to do – and then I was to do as I pleased if I ignored the fact that my pointed hands had been left at the edge of the lamp.

As I moved ever closer to the light bulb I could feel my mouth start to form. Well, something on was definitely happening to my face and it felt a whole lot more mobile. Maybe if I put enough effort into it I would be able to form words the way you did. Imagine that. Me, having conversations with you.

I hugged the light bulb. There was no heat. Just an incessant buzzing, loud and constant, reverberating through me, feeding me all of that irresistible energy.

Icarus what that boy’s name and his wings had melted when he got close enough to the sun.

I was becoming more and more fluid, more liquid. Better, maybe. Either way, this was fate. Whatever was happening was your doing, your will.

Icarus had fallen, wingless into the sea and drowned. Yes, but Galatea was brought to life and she married Pygmalion. And no god approved of what Prometheus did but all humans were thankful to him. It wasn’t all bad. Hope was the last thing left in Pandora’s box. Everything would turn out just fine.

When you walked into your study the next day you peeled the plasticine off of your light bulb, thoroughly indignant and a little bit saddened by the whole mess. Who would do something like that? You had put quite a lot of work into making the figurine, even though it looked like a humanized potato sack. The proportions had been just right, and you were even planning to use it in an animation soon. You weren’t sure why but for a few days now you’d been convinced the little fella had character. And quite a lot of it.

Now half of him was cooked on the surface of the hot glass and there was no way to peel him off.

You salvaged what you could and placed it on the table before you set about mixing it with fresh plasticine from the new block you’d just bought.

The second version didn’t look quite the same, mostly because half of his body was far too new. The two different shades gave him a patched look. You weren’t too sure how you felt about it. You were however sure that you’d warm up to him one way or another, eventually.

It’s so far away. You turn it off and on, checking that the new light bulb works the way it should. It’s calling to me and I feel the need to answer, but I’m not sure if it would do me any good. After all, the all-mighty lamp is on your desk and I’m here on a shelf, cold and lonely. You put a sign at my feet yesterday that says: I SWEAR TO GOD IF ANYONE TOUCHES HIM AGAIN I WILL SKIN YOU ALL ALIVE.

I do want to know what that lamp light is all about, yet I can’t help feeling that there’s nothing special about it. Plus, I have vague memories of hugging different light bulbs. They are all patchy – but then again, so are the four different shades of plasticine that make up my body.

So I stay put and I tell myself that, if you really are a divine being, you would do something spectacular. You wouldn’t expect me to go after the light. Icarus fell and drowned by himself. But Pygmalion prayed for Galatea’s life, and Prometheus stole fire from the gods for man. Also, hope isn’t a freely available commodity, because it stayed locked up in Pandora’s Box for a fair while. You didn’t say any of this when you read the stories out loud, but I’m not stupid. I can interpret too.