In Part one, I introduced The Tale of Genji which is one of the famous classic novels written in eleventh century. But in earlier age, writing poem was already popular and many of the poems remain. At that time, many anthologies of poems were published, and it was popular to critique and choose good poets. One of the most famous anthologies is Ogura Hyakunin Isshu, which includes one hundred poems written by one hundred poets. Here I picked up some poems about love from this anthology along with their backgrounds and paintings. There might be some tips for everyone who desperately needs boyfriend/girlfriend or plans to write love letters for Valentine’s Day.

We don’t know where we go… 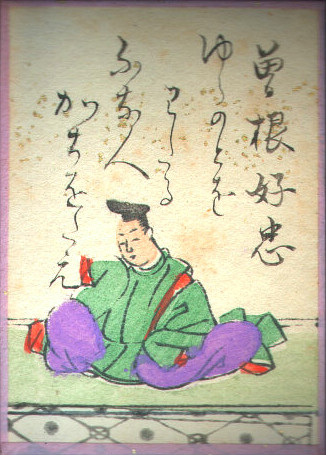 Yura no to wo Wataru funabito Kaji wo tae Yukue mo shiranu Koi no michi kana.

Translation:
The fishing-boats are tossed about,
When stormy winds blow strong;
With rudder lost, how can they reach
The port for which they long?
So runs the old love-song. *

There is no certain information about the writer of this poem, Yoshitada Sone and we only know that he was a great poet and lived around tenth century. In this poem, the course of the rudderless fishing boat was used as a metaphor of the future of true love. Serious relationship was always more difficult for everyone compared to casual relationship, because people tend to devote themselves into it. People’s feeling is usually not stable and of course we cannot know the partner’s feeling so that we sometimes feel uneasiness.

The Minister Sanekata Fujiwara was also a great poet and a court noble who lived in tenth century. It is said that Hikaru Genji, who is the main character in The Tale of Genji, was modeled on him because he was famous as a playboy. 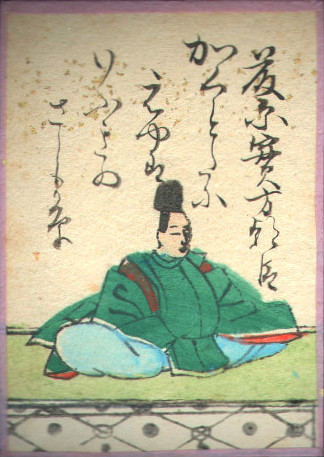 Translation:
Though love, like blisters made from leaves
Grown on Mount Ibuki,
Torments me more than I can say,
My lady shall not see,
How she is paining me. *

Leaves in this poem are the artemisia plant (mugwort) which is used for moxibustion. This is the traditional medical therapy derived from China, which is burning the round dried mugwort on particular points on the body, and it is extremely painful. Ibuki is a hill which was famous for mugwort. Also, ibuki stand for iu beki, which, in conjunction with e ya wa, would mean, ‘Ah! how could I tell her!’ But eyawa as one word means ‘indescribable!’ In the third and fourth lines; sashi-mogusa means mugwort, but sashi mo means ‘even though it is smarting’; sashimo, in one word, can also mean ‘in such a way’. This verse is a very good example of the way the Japanese love to play upon words. *

His passionate love was described in this poem. Also, he wrote that this was the first love letter in his life though it is obvious that it was a lie to show off his sincerity, because he was a playboy.

I love you more and more…

The Imperial Adviser Atsutada was not only a talented poet but also had political power as a member of Fujiwara family which was one of the four great families from eighth century to twentieth century though he died young. 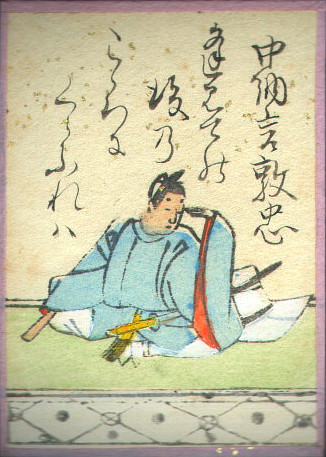 Translation:
How desolate my former life,
Those dismal years, era yet
I chanced to see thee face to face;
‘Twere better to forget
Those days before we met *

He wrote this poem after he spent a night with his loved one. At that time, there is the custom to send poem after the couple spend a night (see Part One) and people wrote how they miss their loved one. He described that his love became stronger than the desire when he wanted her.

She was a talented poet who lived A.D.834-880. She is famous for her beauty and pride, and it is said that there were many guys who wanted to be in a relationship. There is a legend that she told one man that she could be in relationship if he could come to her house for one hundred nights. The distance from his home and hers was about five kilometers. He walked every night even though it was raining or windy day. He brought a branch of peony, and she planted them to count the night he came. However, at the night of one hundredth day, it was snowing, and he was frozen to death. 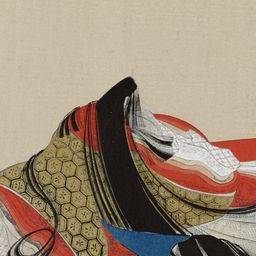 It is said that the reason why she looked back this painting is that she was so beautiful and could not be described in the painting. Some people said that she might have trifled with men and have many relationships by using her skill of poetry while she claimed that she’d never accept any men. Though we cannot know the truth now, it can be said that she enjoyed her life as a poet and a woman. 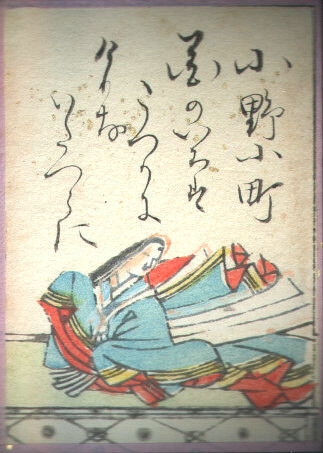 Translation:
The blossom’s tint is washed away
By heavy showers of rain;
My charms, which once I prized so much,
Are also on the wane, –
Both bloomed, alas! in vain. *

It means that cherry blossoms’ tint fades away because of the long spell of rain and the beauty of this flower is fading away as time passes. The flower was used for the metaphor of herself, and her sadness about transient beauty was expressed. There are some interpretations about the reason why she wrote this poem:
1 She simply wanted to express the sadness that she lost her beauty.
2 There was a man who she really liked but he didn’t notice. She waited for such a long time that she lost her beauty.
3 The flower is still flower even though it loses its tint. She wanted to say that she did not lose her charm though she lost her external beauty.
Compared to the first and second one, the third one is quite positive, and her strength can be understood. 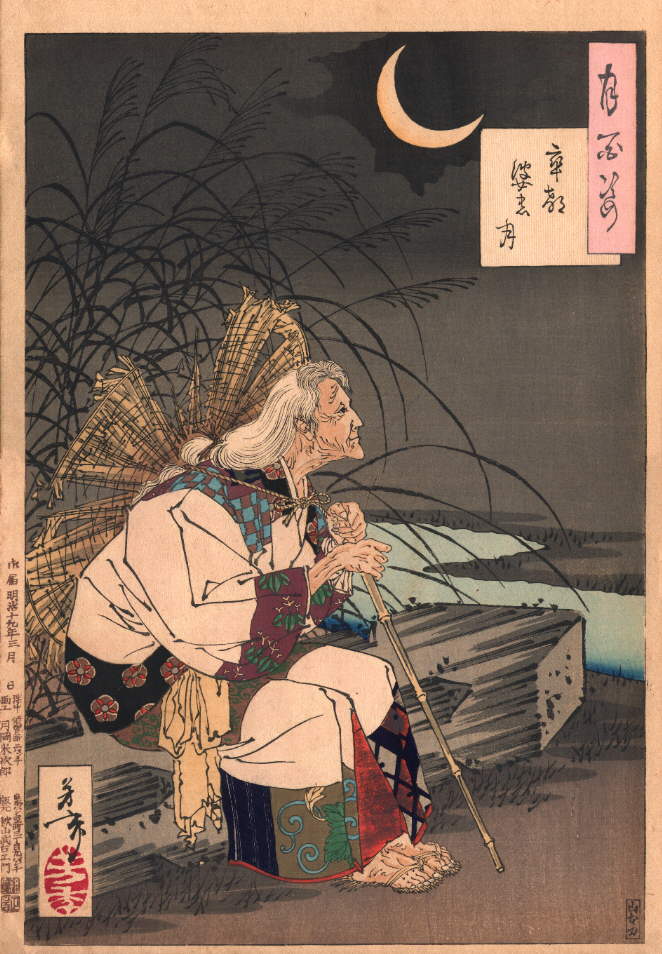 Yoshitoshi Tsukioka,100 Aspects of the Moon #25, Gravemarker Moon, the famous poetess Ono no Komachi meditates on the arrogance and heartlessness she displayed to her suitors as a young beauty. via Wikimedia Commons

Later, in medieval age, the story of her life was made up and we cannot know the truth, but it is thought that her later years was miserable, and she wandered around Japan alone until she died. Her high pride results in lonely life… you will miss the good one if you have too high pride and treat them coldly. Also, if you never tell your felling, your loved one never notice.

Even though they lived in different times and country, love is always unstable, and people are suffered from it. Hope you those who already have boyfriend/girlfriend spend great time on Valentine’s Day and do not let them go… Those who do not, why don’t you tell your feeling to your loved one!

You want to write letters for your loved one like these poets? – Here is the chance. https://www.thebubble.org.uk/columns/ 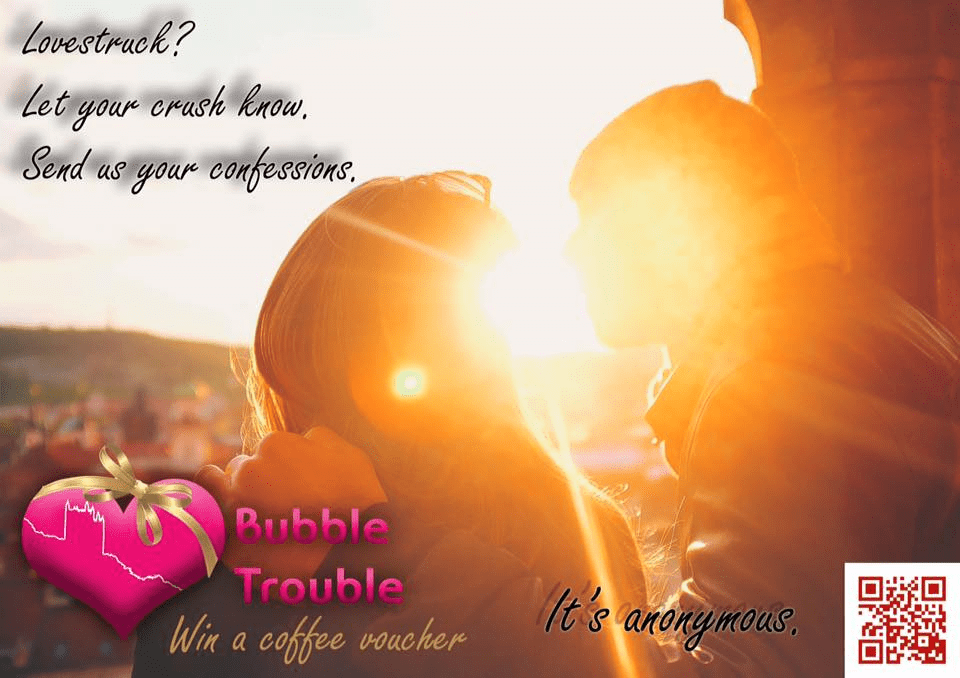 Your letter may be published in our Bubble Trouble love column anonymously. You also have a chance to win a coffee voucher to ask your loved one out!

*All translation and interpretation are from William N. Porter, A Hundred Verses from Old Japan Being a translation of the Hyaku-nin-isshiu (2007).