Tom Davidson: An exhibition of linocuts at Trevelyan College

Being a member of Trevelyan College’s Fine Art Committee, I felt I ought to seize the opportunity to write about one of the continuing events which host a wide variety of artists in the college Bar. It is always a privilege to meet with artists and to discuss their work and the practicalities of its presentation. Gaining an insight into the ‘technical’ elements of exhibiting, albeit a small, conservative space, remains rather a special thing… 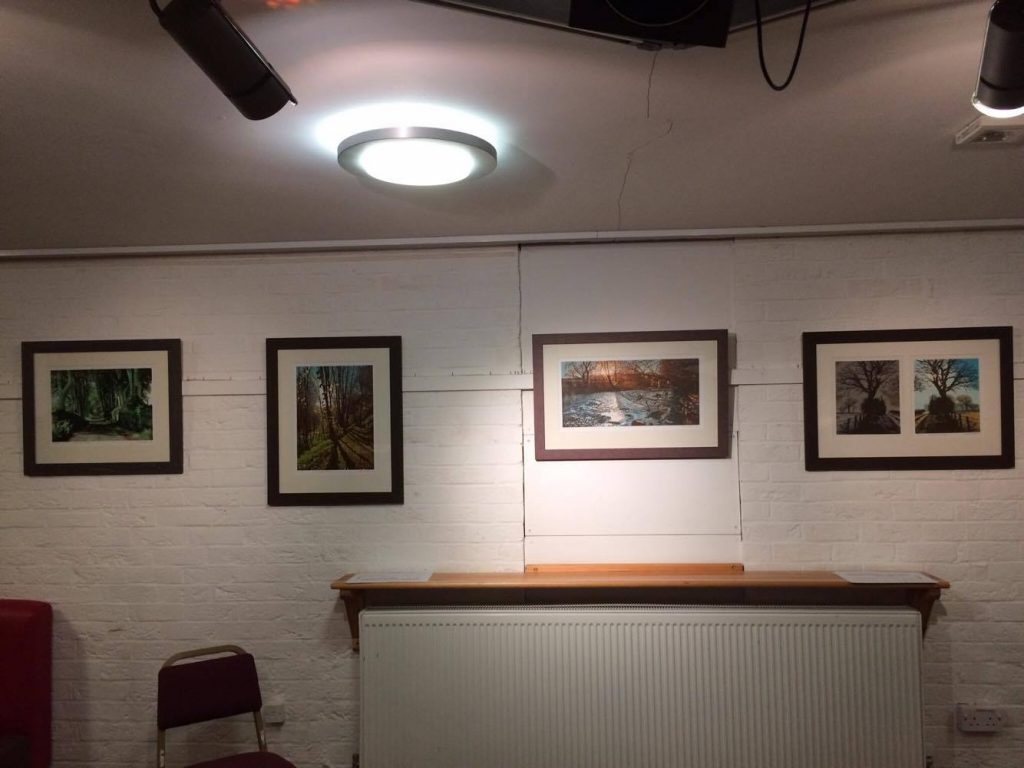 Currently Tom Davidson, a Scottish-born artist trained at Carlisle College of Art, graduating in 1977 with a degree in Graphic Design, is exhibiting in this space. Davidson’s work is certainly extensive, despite this exhibition focussing on linocut printings techniques (with the exception of a beautifully dainty ink and mixed media piece), his career also includes collections of paintings in multiple other medias. 1984 saw his initial turn to print-making, and from there he developed his favourite media practice in linocuts. Davidson opened his own gallery in Earlston on the Scottish Borders, and has works held in private and public collections, namely Paintings in Hospitals, Houses of Parliament, Floors Castle, and further worldwide. 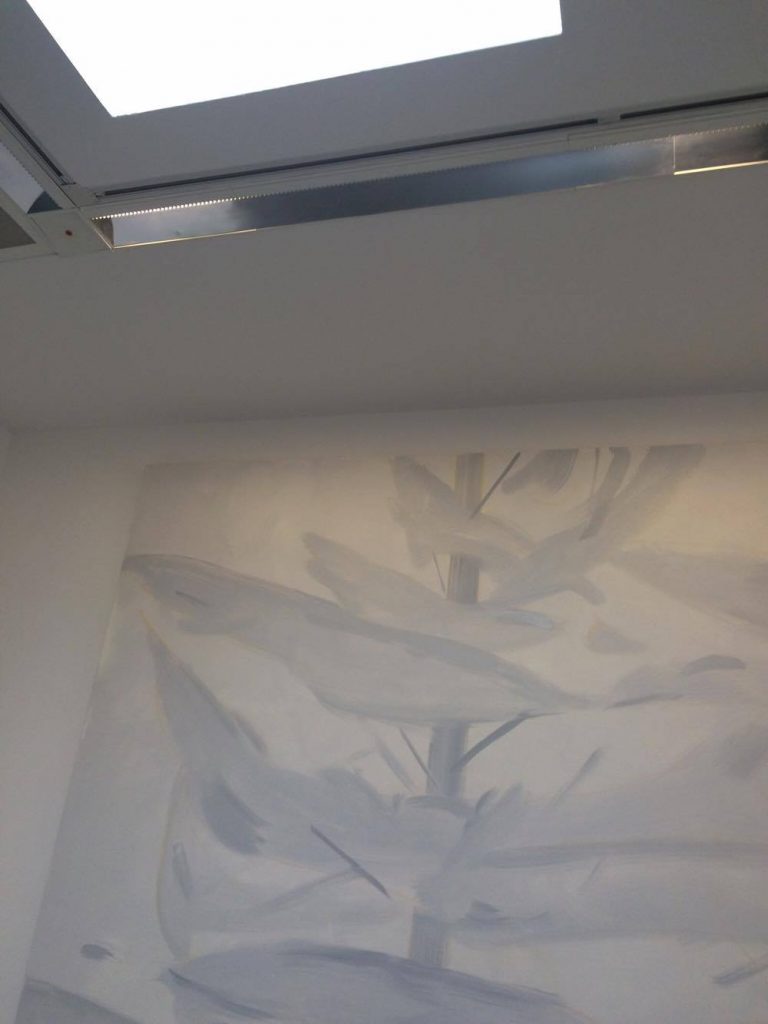 The delicacy of each piece results in a uniqueness in each of the works, owing in part to the hugely time-consuming and intricate process of creating this prints. The images are carved from linoleum blocks using a reductive process; each element is formed and printed individually, whether it be a specific colour, area of shading, or the formation of a specific object image. The density of detail is astonishing. Combining with the basic bold outlines needed to define figures, these pictures feature arrays of minute flecks, carved and coloured to mimic the fluidity of light and dappled effects of shadow within the rural environments that are his subjects. The overall depth of the pictures is impressive and captivating, to the extent that in his wider rural scenes of roads or fields in particular, the viewer eagerly searches for the narrative behind them. 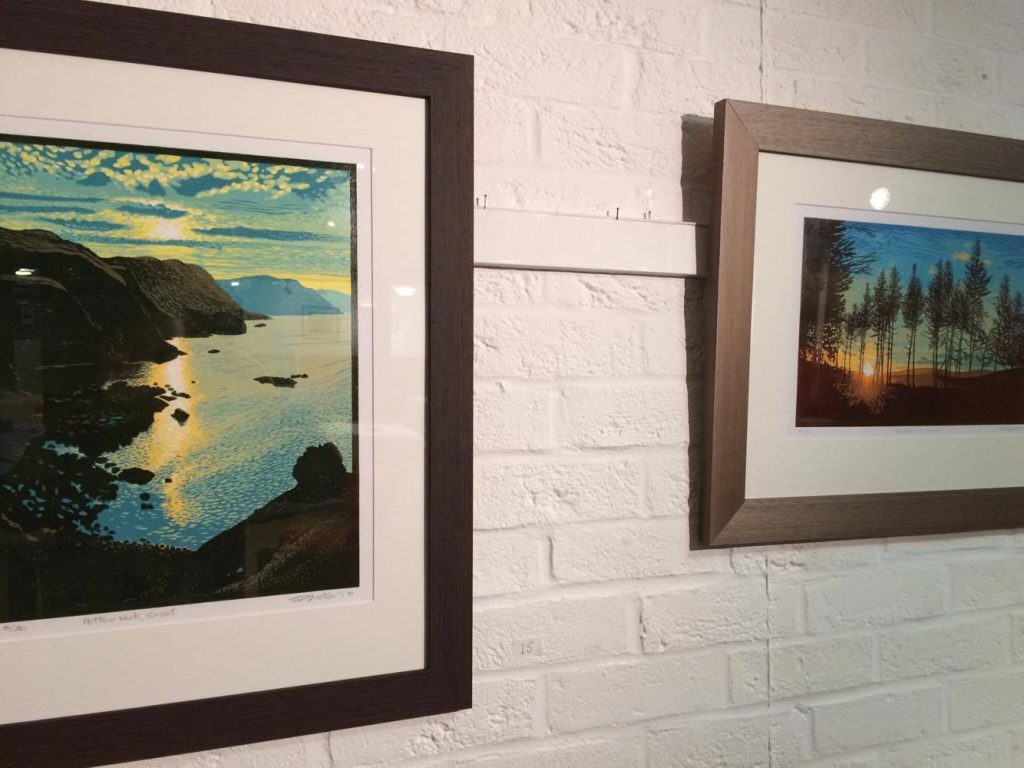 One of the most prominent characteristics of Davidson’s collection here, was the inclusion of a single and in many ways crucial light source – the being the sun or the moon – which illuminated and intensified all other visual effects in the picture. Specifically, pictures of woodland scenes or trees and vegetation, were those in which this technique proved most successful and effective. The lino-cutting technique doesn’t offer the flexibility or exact precision of shading or colour complexity as hand-painting. Yet what it employs so effectively is a bold use of chirascuro (elements of contrasting light and/or darkness), a traditional quality sought after by the Academy across the centuries of taught art practice. It could be seen as though Davidson has hybridised the Academic practice of matching light and shadow to create a sense of perspective on a flat surface. 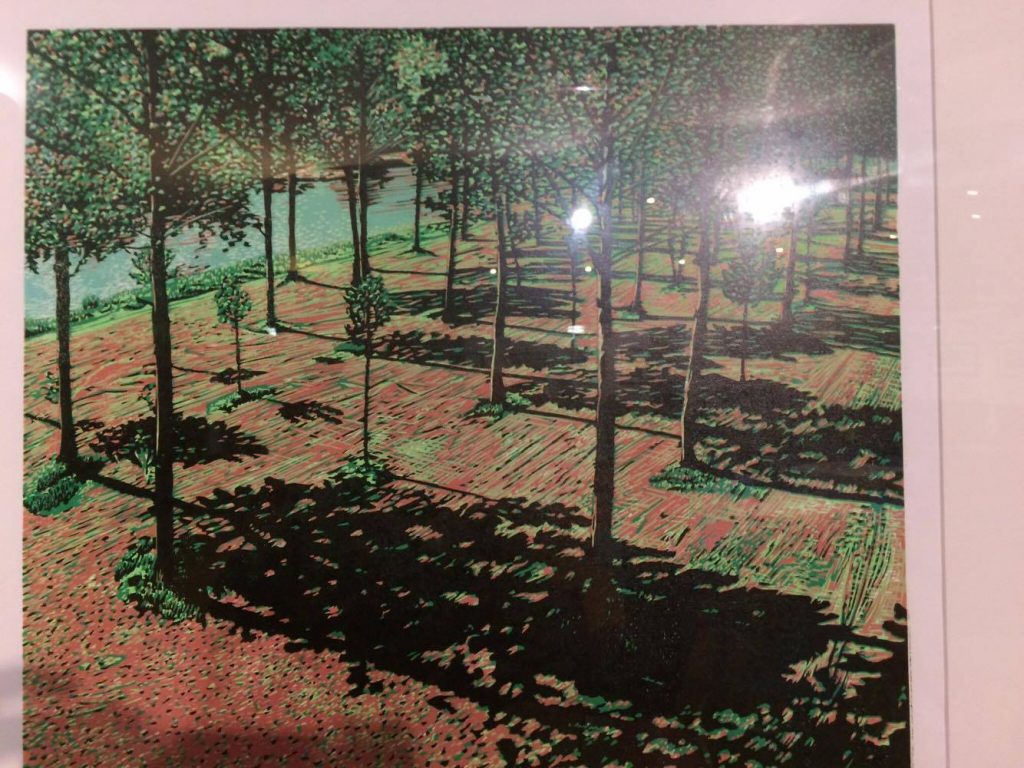 Overall, Davidson’s exhibition presents a valuable collection of works, which remind their audience of the true practice of art. The ‘printed’ aesthetic itself represents a manual process and product, adding another dimension to both the appearance of the pictures, but also to their being works of art.