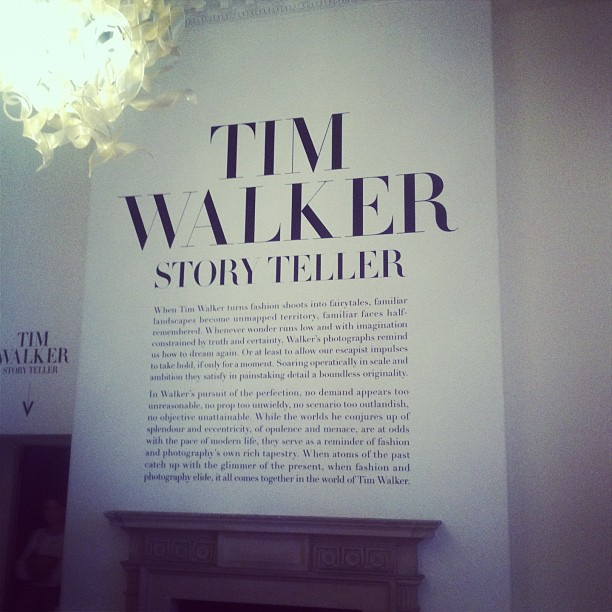 Pastel cats, flying saucers on a fox hunt, and floating dinner parties all feature as subjects of Tim Walker’s photography. Bringing to mind the dreamlike imagery of Alice in Wonderland and the Surrealists, his work nevertheless captures the human realities of his fantastical scenes with a sense of British eccentricity.

Walker, primarily a fashion photographer, has a style which manages to appeal to a far wider audience. A current retrospective at Somerset House, ‘Tim Walker: Storyteller’ displays some of his inventive photographs alongside many eccentric props from his shoots.

Although my love of Walker’s photography began when I had strong interest in fashion, I have remained attached even as that interest waned. One of my favourite shoots is from 2009 featuring Lily Donaldson for British Vogue. The images of a wartime airplane in the room of a country house manage to evoke nostalgia for both a specific era and some unarticulated lost time. The connection between the plane and the room is left for the viewer to decide; is there a character in one place day-dreaming of the other? Are the two elements meant to be incongruent, or related? The different images seem to tell stories of many people; whether specific or general, real or imagined. Then there is Walker’s characteristic theatricality; smoke, lighting, dramatic movement or expectant stillness. The images depict not Lily Donaldson, model, but Lily Donaldson, heroine. I haven’t even mentioned the clothes in the shoot. Although central to the images in their capacity as fashion photography, they are simply not the focal point; the photographs manage to retain an autonomy from this capacity.

As much as I distrust the advertising power than many of Walker’s images must have, they still speak to me in a way that most other fashion photography no longer does. In fact, I think they represent the best qualities of fashion, and specifically, British fashion; the emphasis on creativity, experimentation, and eccentricity. Yes, they are commercial, but if they were not, I doubt Walker would secured the funding to create such bizarre photographs. Moreover, the commercial context has not (as far as I can tell) impacted on Walker’s creative freedom. His images seem to speak to some eternal sense of style, which need not require buying the latest or most expensive clothes. And whilst the women depicted are clearly beautiful, his photography does not enter into the more harmful scrutiny of women’s bodies which as caused so much anxiety among ordinary women.

Moving away from the fashion photography, Walker’s still lifes are cross-overs between the real and imaginary. Often depicting countryside scenes or the interiors of country houses, they appear typically British in some indefinable way; the Michael Hoppen Gallery describes them as “nostalgic of an era of innocence and exuberance; youthful imagination and a uniquely British aesthetic.” My favourite is the wonderfully titled ‘It rained outside so we camped inside’ (2002). Picturing a huge library filled with illuminated tents, it instantly takes me back to my own (less glamorous) experience of indoor camping as a child, and stirs up the sense of excitement and magic that I felt at the time. Rather than dwarfing my own experience, the exaggerated grandeur seems to celebrate it. Even better, according to an interview with Walker for the Guardian, the shoot had been planned to take place outside but Walker moved it inside due to rain – a real-life example of the spontaneous spirit which the works exude.

The first room of the exhibition astounds me: it contains the actual model airplane used in my favourite shots and large reproductions of the photographs themselves. Moving through, the rooms are well-linked, going from the dream-like to what can only be described as nightmarish: enormous insects and a huge doll, the photographs accompanied by the oversized objects themselves. The influence of Tim Burton is evident, and the film-maker and his wife Helena Bonham-Carter appear several times in the portrait photography. The progression works well, as although there is a definite sense of Walker becoming preoccupied with darker themes, the dream-like quality remains throughout.

Highlights of the portraiture include a beautifully unified photograph of Vivienne Westwood and Alexander McQueen with a human skull and cigarette. A comment from Walker reveals his sense of nostalgia which comes from the very act of photographing: it captures a moment which is necessarily lost as soon as the photograph is taken. This sentiment is poignant appearing alongside images of McQueen and, in a different way, the four surviving Monty Python members.

The exhibition is excellently designed by the Andy Hillman studio and manages to combine the mixture of photographs, props and a video installation of backstage footage from shoots. If I have any criticisms, it would be the lack of Walker’s early work. The innocent quality of some of these images (such as ‘It rained outside…’) gives a good window through which to see the later, darker photographs. Their inclusion in the exhibition would have given a better sense of Walker’s changing preoccupations during his career. But this is merely a minor objection. Seeing this mid-career retrospective makes me wonder what lies in store.