This is Not a Haystack! Durham’s History of Art society hosts Dr Anthony Parton 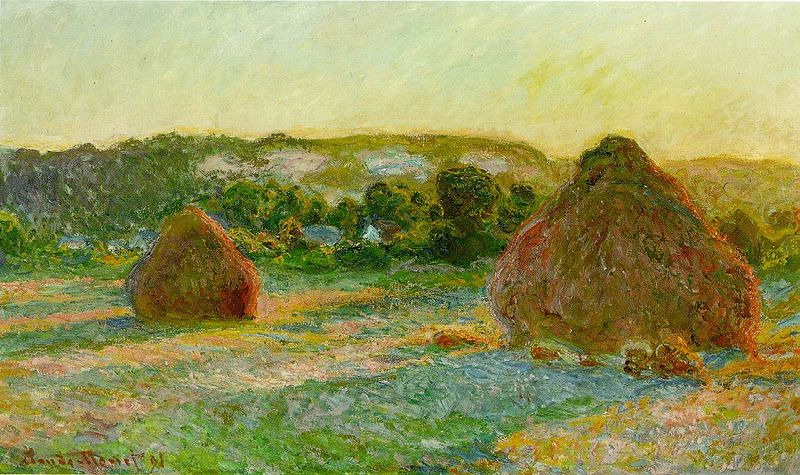 Monday the 7th of March saw Dr Anthony Parton, head of History of Art at Durham University, present a new interpretation on a famous oeuvre of art to the Durham History of Art Society. “This is not a Haystack” Dr Parton declared with total confidence, as he pointed to what was clearly a haystack painted by Claude Monet (1840–1926). Dr Parton’s research interests lies in the field of early 20th Century Russian art and design. However after recently publishing his book “The Art and Design of Natalia Goncharova” which he had been working on for ten years, Dr Parton appears to be exploring areas of interest that lie outside of Russia.

The haystacks, or grain-stacks, were monumental parts of the landscape surrounding Monet’s home in Giverny, France and were the subject of twenty-five paintings that were created over the year 1890. This body of work is perhaps only exceeded in fame by Monet’s Water Lilly collection, however knowing nothing about these works wouldn’t have left you at a disadvantage in Dr Parton’s lecture, as he explored past interpretations as well as his own train of thought with clarity and simple explanation.

The title of his lecture is a reference to the Surrealist artist René Magritte (1898–1967) who’s most famous painting is titled This is not a pipe (1928–9). Magritte was well aware of the contradiction and the irony his work employed; however Monet’s paintings are not commonly given the same credit. As one of the most well known impressionist artists, his work is synonymous with the capture of transience and viewing the world at a purely visual level. An example of this can be seen in Le Bassin d’Argenteuil (1874) .Monet is simply painting a scene of leisure and is not trying to provoke a social commentary or debate. However Dr Parton disputes this, his lecture presents Monet’s work as self aware, and rejects the notion that these works are simply representations of picturesque landscapes.

For the modernist art critic Clement Greenberg (1909–1994) Monet’s Haystacks were simply a hanger for the autonym of art. Greenberg championed “art for art’s sake”, celebrating the painterly quality of impressionist work and revelling in the idea that art did not pretend to be a mimetic window onto the new world. Instead, it calibrated the knowledge that art is simply paint on canvas. Dr Parton suggests that from a Modernist perspective, this is not a haystack but simply a form that Monet monopolised in order to explore painterly technique. To demonstrate the debate surrounding this interpretation Dr Parton introduced a Social Historical perspective and draws on the ideas of Professor Paul Smith from Warwick University. For Smith the haystacks are not haystacks but a comment on the dignity of labour comparable to realists such as Jean-Francis Millet (1814–1875) who championed the naturalism and showed the hard lifestyle of the French peasants with honesty but also with honour.

However, Dr Parton asked the audience to really look at the work he displayed, and recognise the composition of the paintings. The haystacks are not simply part of the landscape but, in many cases, take up half the canvas. They are timeless, archaic and, Dr Parton argues, are no longer haystacks but symbols, an objective representation of the subjective. Parton suggests that Monet was inspired by artists such as Van Gogh, Gauguin and Bernard who were painting using Symbolist techniques. For these artists the material world was simply symbolic for the ideal world that lies just out of reach.

The choice of subject is important, not because it is a haystack, but because it symbolises man’s interplay with nature at a time when the industrial revolution was causing a catastrophic rupture between man and the natural world. Parton suggested that rather than being a haystack these paintings are almost religious and spiritual aids. Japanese art was becoming increasingly available in France at this time and the Shinto and Buddhist respect for nature oozes out of Monet’s work.

In the past I have been bored by these overexposed and well known series of painting, however, Dr Parton’s lecture managed to provoke a new way of viewing. These paintings do not show haystacks… they show so much more than haystacks!

Many thanks to Dr Parton.