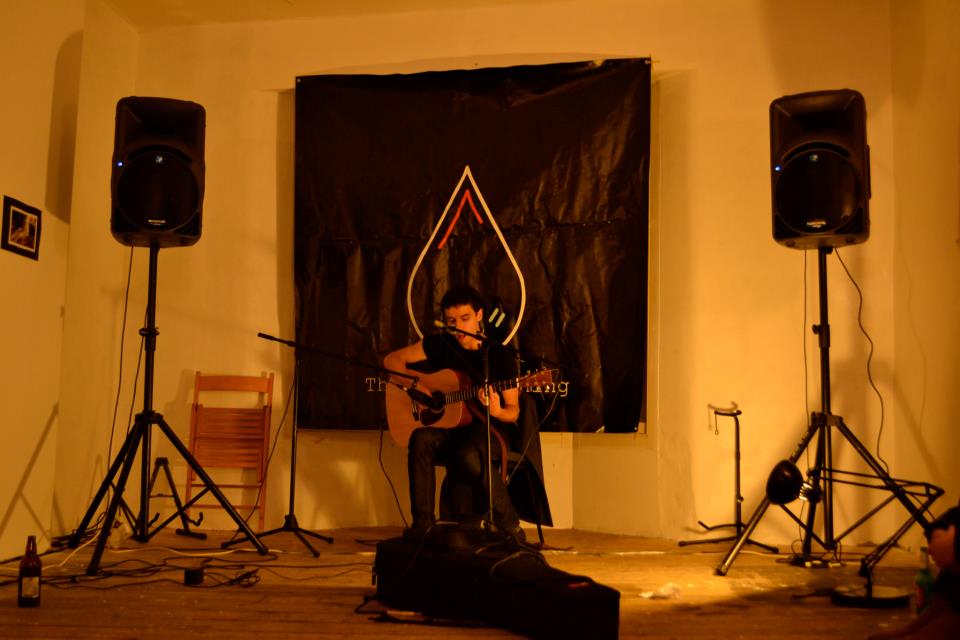 The first thing that hits you when you walk into the exhibition space of Empty Shop is how busy it is. A night of music and photography, TheBubbleBurning event at Empty Shop featured original music by Anna Costello, Harri Endersby, Timmy Fisher, Lucy Walling and Nick Wallis as well as photographs by Ann Chih, Paul How, Rebecca Ellul and Julia Wegner. As people milled around and various acts filled the space with their acoustic presence, the photographs were almost a secondary afterthought; casually present in an unobtrusive way. As one became immersed in the music, it was almost easy enough to overlook the numerous prints decorating the walls on either side of and leading up to the exhibition space. That is however precisely the charm of this exhibition and what really lent to a general atmosphere of the relaxed appreciation of art, both of the audio and visual variety.

The photographs are split into different sections of the exhibition and arranged by series and photographer. The four photographers each portray distinct perspectives and styles, contributing to an interesting medley of themes.

Julia Wegner’s ‘Sky Blue’ and ‘Rhythm’ led us into the exhibition space, a series of four photographs capturing fey, surreal moments. Her handling of subjects like carnival rides is infused with a certain joy that reminds one of childhood. The use of color saturation and shadow in her work allude to the haziness of memory and emphasizes the nature of the medium as the retrospective observation of a single moment in time. All this creates a distance between the viewer and the work whilst simultaneously drawing the viewer in through it’s playful subject matter, which constructs a bittersweet tone to her work that is both impactful and effective.

Paul How’s depiction of cityscapes in ‘Cities’ transitions nicely into his series ‘Out at Sea’, featuring natural beauty, sunsets and crashing waves. The perspectives of various cities at different points during the day offer up a sensitive, almost tender approach to a well-worn subject. The warm tones of sunsets and skies framing the different cities present a calmer narrative to the bustling lifestyles typically associated with them. The viewer is ultimately drawn in beyond the structures embodied in the images to imagine the characters and emotions that exist within. ‘Out at Sea’ focuses on the natural landscape, creating a contrast between movement and stillness in his images of sunsets and waves. The strength and rawness of the crashing waves complement the warm hues of peaceful sunsets in a Hemingway-esque approach to nature.

The main exhibit featured Ann Chih, an artist from Hong Kong, who displayed Eidos Skopeo (observer of forms). Her black and white photographs of busy modern settings are each reflected to create a dual image effect, and were my personal favourites in the exhibition. The lack of any one focal point draws the eye to numerous points, conveying an intense, almost claustrophobic effect. The lack of colour downplays the extent of the detail present in her work, giving an almost surreal effect to the frenzied modernity depicted. The repetition created by the mirror-image effect appears to emphasize the cyclical recurrence of contemporary living, which is complemented by the contrasts of the black and white. Ann Chih successfully recreates the emotional aspects of city life through her manipulation of images.

‘Animal Portraits: Instincts and Insights’ by Rebecca Ellul is very much what it says on the label. She captures various animals in different moments, giving her animal subjects an almost human rendition in terms of their psychological and emotional state. I particularly enjoyed her photos of cats, one snuggled into a warm, furry ball that instills the viewer with a sudden calmness. Another is startled, coiled and staring confrontationally into the eyes of the viewer, projecting it’s surprise and suspicion through the lens.

The lack of a consistent theme is a strength to this exhibition, drawing in a cacophony of different perspectives and visual styles that served to emphasize the individuality of each. The different perspectives rendered with significant emotive qualities vindicate what John Stathatos said about photography as a medium and its “unique relationship with reality, which has little to do with ‘truth’ but everything to do with the emotional charge”.

TheBubbleBurning successfully managed to establish an accessible, informal platform for expression and appreciation, no doubt aided by the vibe of Empty Shop and the conduciveness of the space it offered. The music was clearly the star of the show, sincere and well-received by the audience, and it played off against the exhibition perfectly. Accompanied by Bart Bryant-Mole’s slick tunes in the adjacent bar, a good time was had by all.