The Guggenheim, Bilbao: A Review 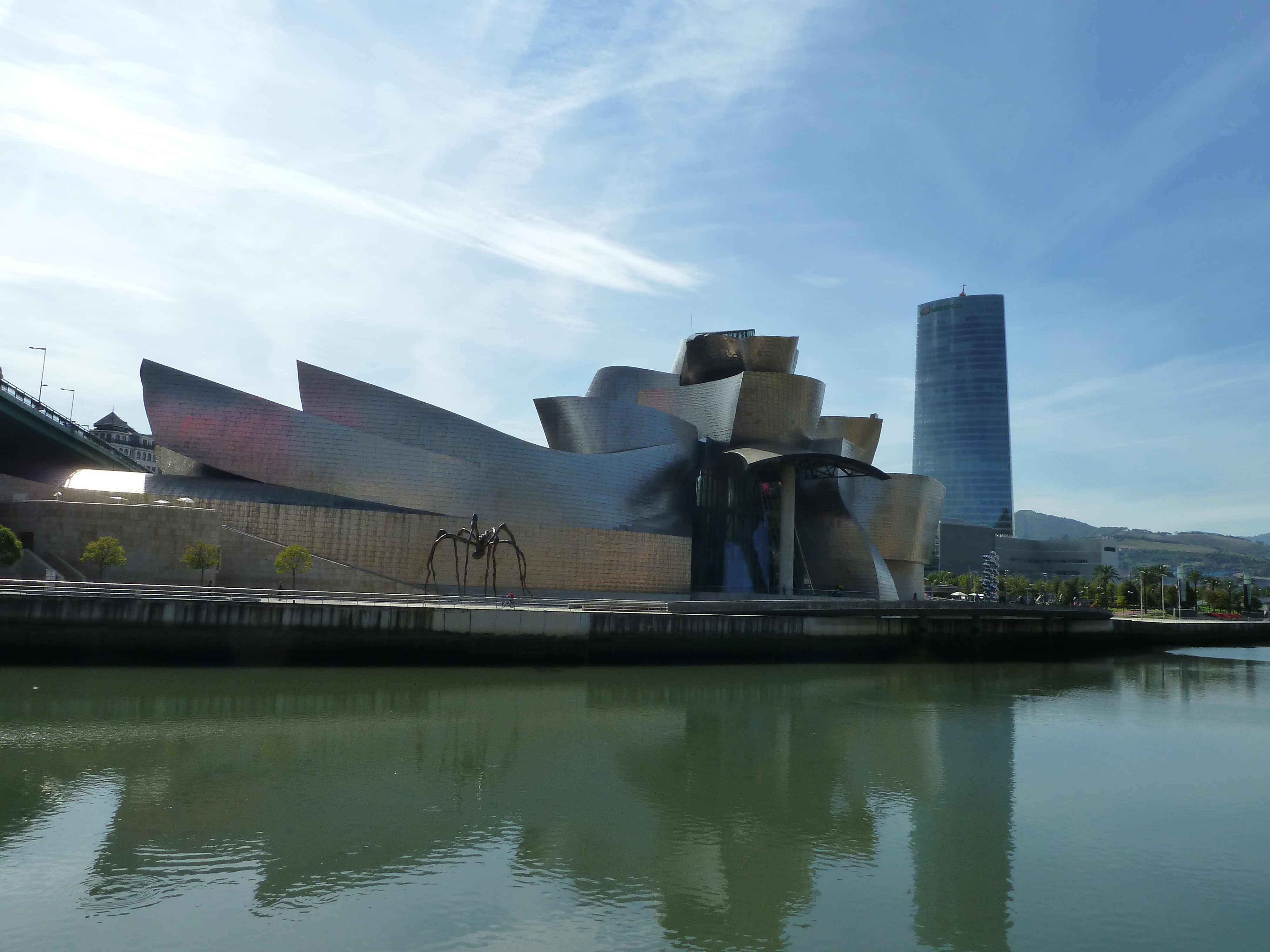 The Guggenheim, seen from over the river

A large puppy greets you when you arrive at Bilbao’s Guggenheim Museum. And by “large”, I mean really large. It towers over passers-by and is made of flowers. Inside the museum, a talking cat continues the theme of household pets. But more of that later…

Fifteen years ago, Bilbao was a very ordinary industrial city. In recent years its reputation has changed drastically, and now the city is hailed as a top visitors destination in Spain. The clinching factor in this change was the iconic Guggenheim museum.

Tourists coming to Bilbao marvel at the undulating waves of titanium which make up the building itself. It certainly can be called a piece of art in its own right. But I was more distracted by the huge work of topiary in front of it. It’s almost off-putting having this flower sculpture of a dog towering over you. Sadly, it seems that Jeff Koons, its creator, did not care enough about his floral pet to give it a name. It’s simply called “Puppy”. 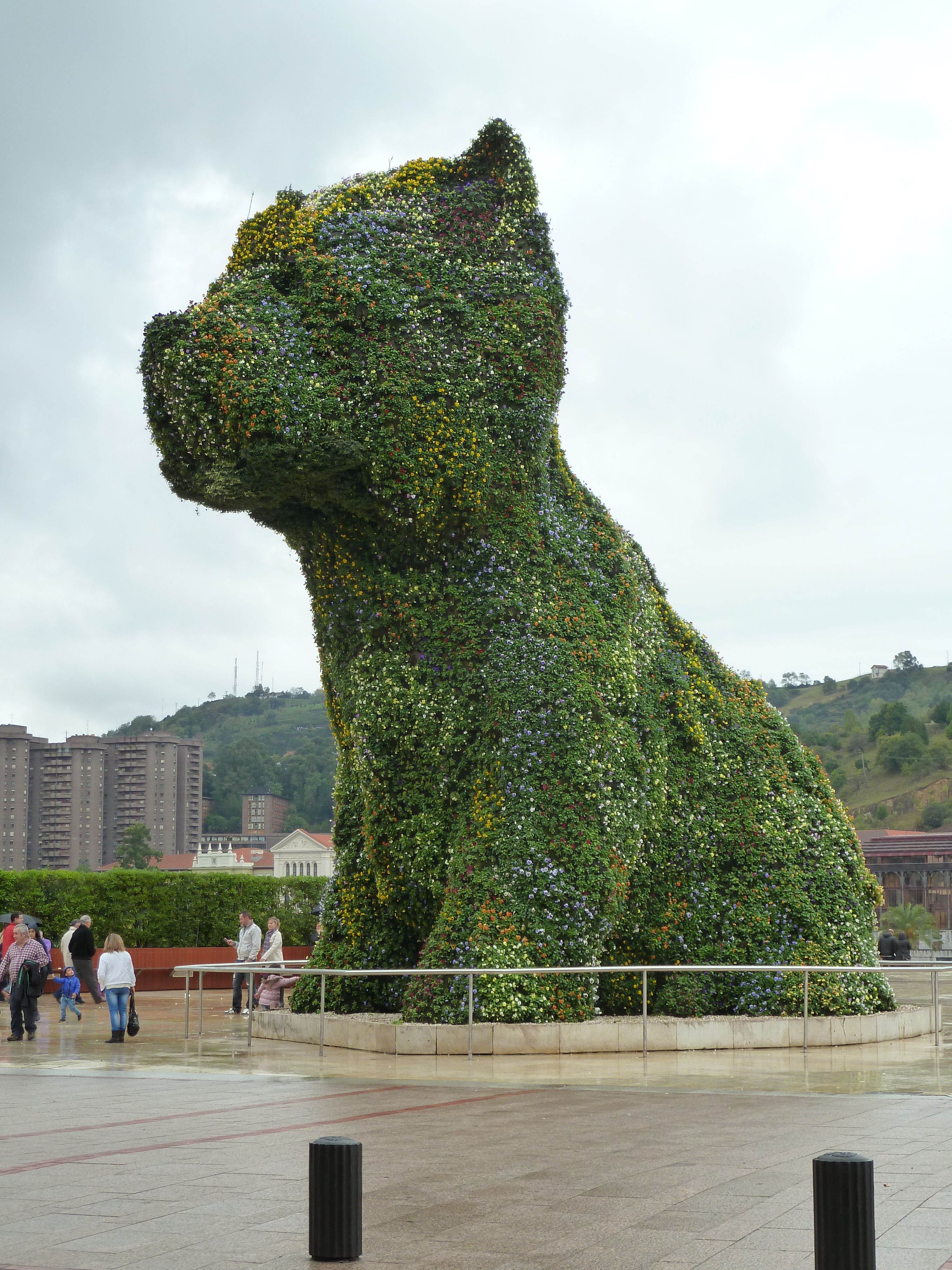 Once I had got over the surprise of the giant dog, I was able to shift my focus back to the Guggenheim. It was a blazing sunny day in October. The weather can make a big difference to your perception of the building. In this case, I was presented with what looked like a colossal shimmering jigsaw. There’s no particular sense of symmetry. It has the appearance of a de-constructed ship from the future.

Eventually I did succeed in going in. The permanent exhibition, “The Matter of Time”, by Richard Serra, is likewise on a giant scale. An enormous atrium within is filled with seven sculptures of rolled steel named. Visitors can walk in and around the fourteen foot high swirls of metal. In addition, a separate room to one side depicts the creation process. Models of the exhibition showed how each steel sheet connects to the next, leaning back and forth, with no external source of support. The project has a dizzying effect, as you follow the circling, snaking walls. 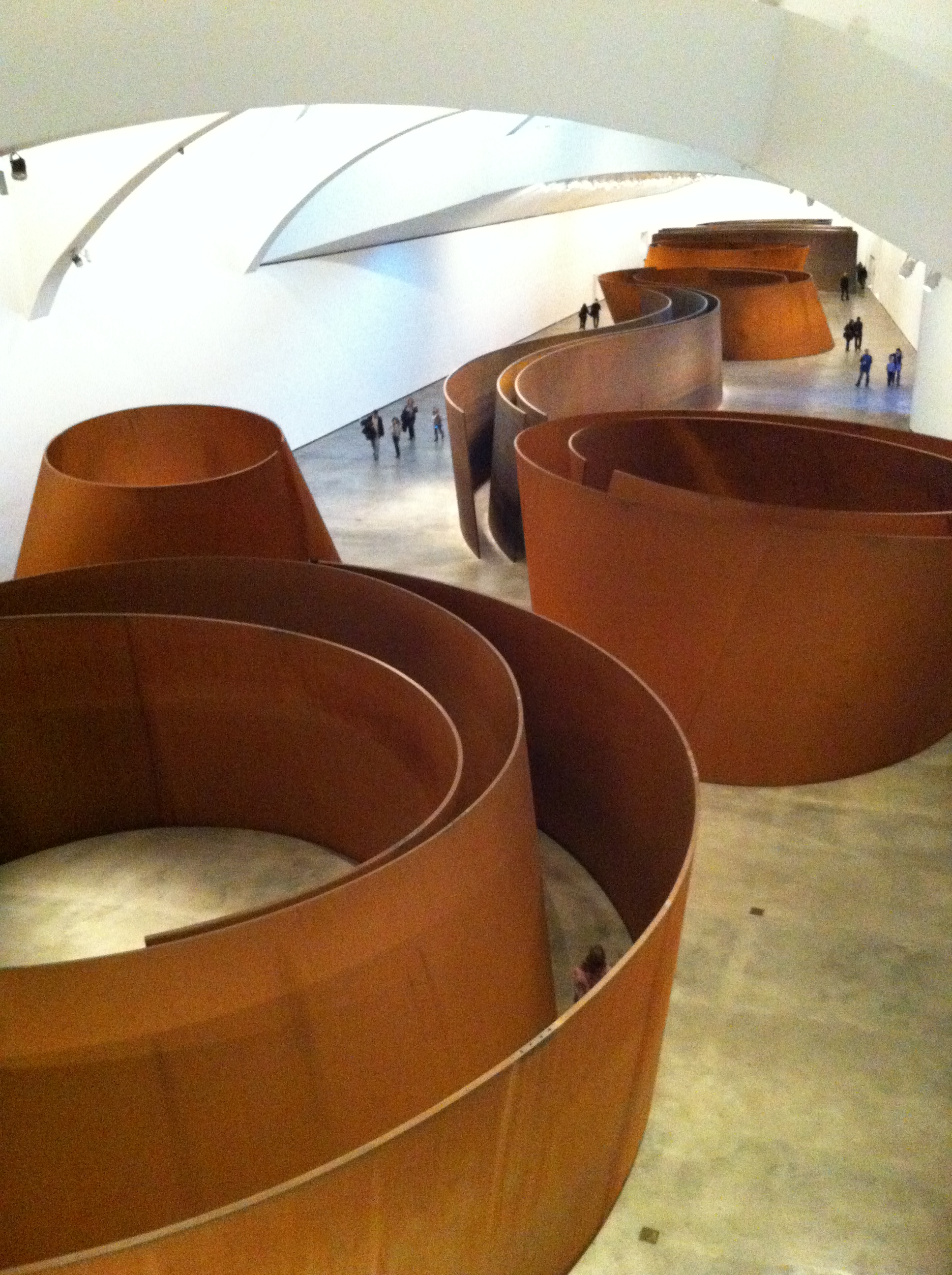 “The Matter of Time”, by Richard Serra

The large-scale theme is continued throughout the museum. Filling almost an entire wall each are two paintings by Anselm Kiefer. Actually, though, you could even call them sculptures. In particular, “The Land of Two Rivers” (1995) is almost three-dimensional. It is layered with a combination of emulsion, acrylic, zinc plates-condenser on canvas, lead, and salt through electrolysis. I can only describe the effect as a sort of layering of a bubbling, cracked and raw textured piece.

The final work which caught my attention (though perhaps not for the right reasons) was by an artist called Liam Gillick. I was slightly confused upon entering the exhibition, as I instead found myself in a large kitchen. The sense of confusion increased, when, after having paced the room, I noticed something strange. A stuffed cat. It was sitting high up on one of the shelves. Bizarrely, the dead animal suddenly started to speak, its voice-over echoing around the room. It might have made more sense if I hadn’t failed to read the title and list of media used for the piece. It was entitled “How are you going to behave? A kitchen cat speaks” and was created with “wood, lamps, stuffed cat, text, door blinds and MP3 player”. Later on, it was explained to me that the whole thing was (apparently) a reinterpretation of conceptual art and minimalism.

After recovering from the shock of the talking cat, I escaped outside. Paying an entrance ticket to the museum is not necessary to see the art. Jeff Koons has more of his work featured outside the building. Like the giant puppy, “Tulips” is outside the Guggenheim and can be found on the other side of the building, by the river. This sculpture is bright and shining, with the “tulips” looking like a giant balloons. Yet, each one is made from stainless steel covered in iridescent colours . Beyond a misty expanse of water is another sculpture; a ten metre high bronze spider looming over visitors walking past. 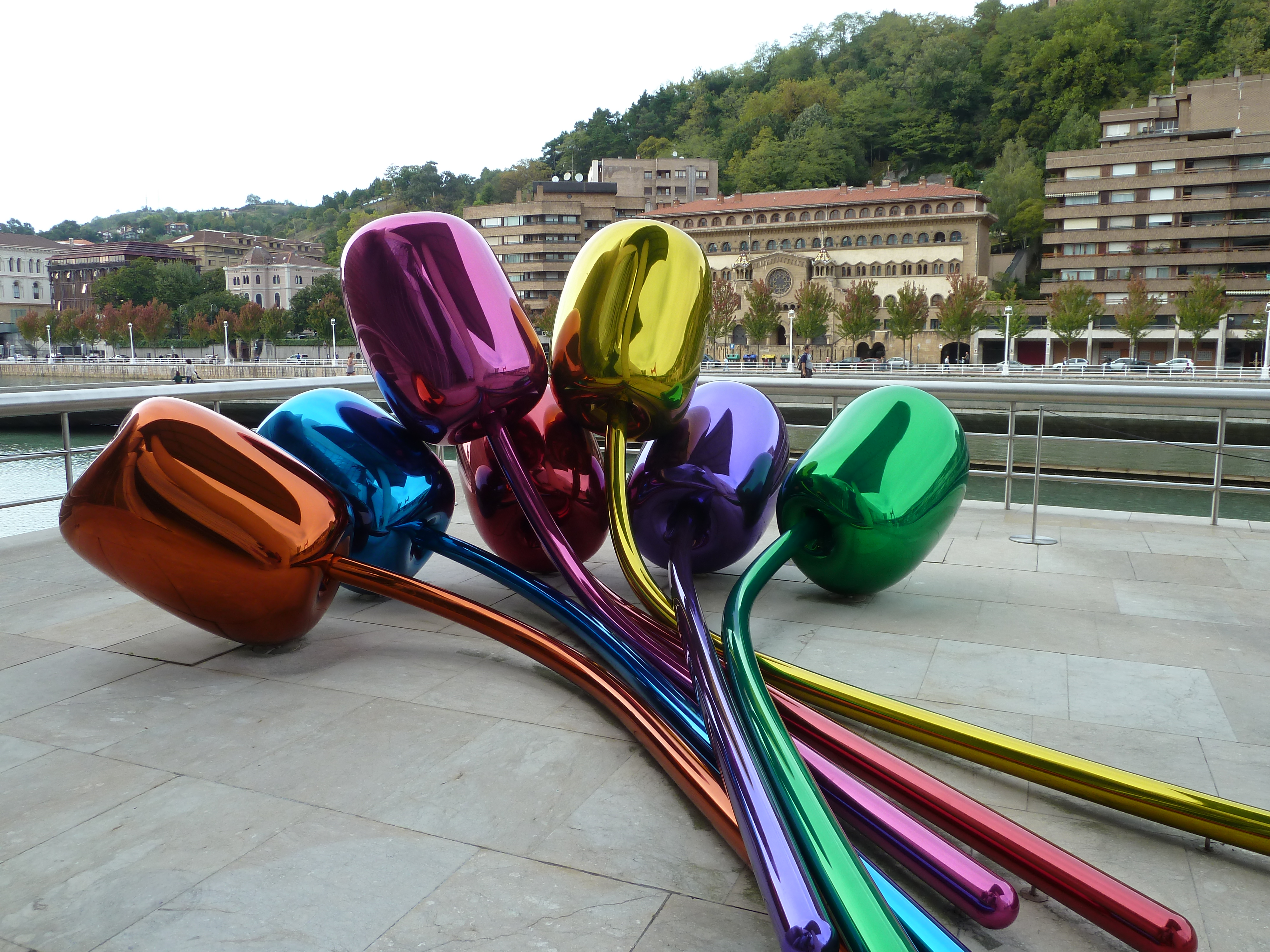 I decided I would happily return, but without needing to even enter the Guggenheim. I would recommend the same to anyone visiting Bilbao… unless you really want to meet the talking dead cat.