The Art of Science

Ancient Greece is considered by many to be one of the most prominent civilisations in terms of Art, whether it be sculpture, architecture or even pottery. Not only did its prominence mean that people have continued to make copies of the original masterpieces for years to come, but also that Ancient Greek Art would be among some of the most famous and recognisable pieces of artwork of all time. This article will focus particularly on the development of Ancient Greek sculpture, and it is through this that we will be able to see how both art and science are intricately connected to one another and how each one is important in the development of Ancient Greek sculpture.

Greek sculptures first took their inspiration from the likes of the Egyptians among others. However, they continued to develop these inspirations in a way that had never been done before. Greeks were particularly concerned with creating a sculpture that was as close to the human form as possible, which is important to bear in mind when considering the connection of art and science in Ancient Greek sculpture.

Some of the earliest forms of Greek sculpture were the nude male youths, called kouros or kouroi for plural. These sculptures were very rigid and stiff with very unrealistic features, shown by the work ‘Kouros of Naucratis’ . However, one feature that particularly stands out is that although one leg is slightly in front of the other, the sculpture continues to stand straight. One would expect that if one leg was in front of the other that the statue would be leaning ever so slightly forwards, however there is no evidence of this. This therefore suggests that the sculptor must have made the front leg slightly longer so that the sculpture could continue to stand straight and upright. Whilst this unfortunately hinges on the realistic nature of the sculpture, this would have been done in order for the sculpture to be stable. In this particular case, we can see how sculptors have had to adapt and at times compromise certain features in order for the sculpture to remain upright and balanced.

However, during what is known as the Classical era (5th – 4th century BC), Greek sculptors became increasingly concerned with creating an idealistic form of the (male) body. They wanted to overcome the issues presented with the kouroi to create a sculpture that was as realistic, human and as life-like as possible. This meant greater attention to detail was taken towards features such as muscle definition and facial expressions, as well as greater experimentation with a sculpture’s poise. In other words, Greek sculptors gradually moved away from the two-dimensional, rigid, stiff sculpture to something which was much more three-dimensional. 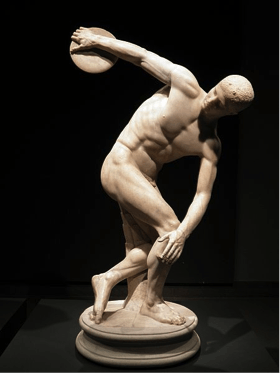 Focussing particularly on this idea of poise, if we look at the kouros we can see that because they are standing rigid and upright, their weight is consequently focussed at the centre. However if we look at the Discobolus, one of the most famous sculptures from the Classical era, we can see that because he is bending down and his torso is twisted slightly, his weight is focussed slightly off-centre. Therefore in order to balance out the weight and counter the effects of gravity, we can see that a strut (support rod) has been put in on the back leg to shift the sculpture’s weight back to centre. 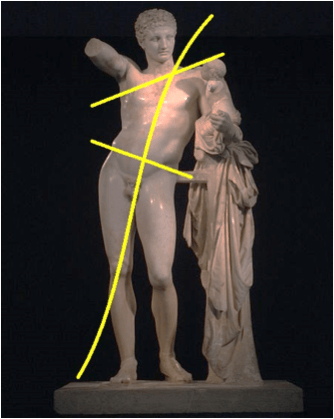 These two sculptures highlight the key difference between archaic and classical sculptures. Classical sculptures were more in favour of a sculptures’ equilibrium being slightly off-centre as this was considered more natural and life-like, and the technical name for this is contrapposto. As you can see from Discobolus and particularly the technically analysed image, contrapposto is where the sculpture’s weight is shifted to one foot, creating a bend in the rest of the body, and consequently forming an “S” shape. This is why a strut is often essential in many classical and later sculptures, as it ultimately stops the sculpture from toppling over. However, what is remarkable is that the Greeks became very astute at covering up these struts, which were often seen as ‘out of place.’ If we take a look again at the sculpture of Hermes and Dionysus then we can see that the strut is covered up by what we can assume is Hermes’ clothing. In this way, we can see how Greek sculptors have managed to find a way to achieve the idealistic male form and counter the effects of gravity by adding in the strut, and even making the strut somewhat artistic too. 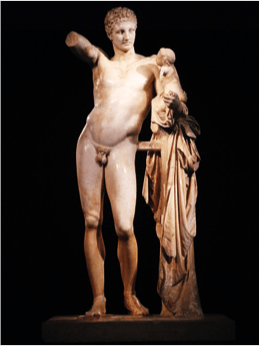 Overall, we can see that Greek sculptors were as much artists as they were scientists. Therefore, it is important to recognise that science and art, at times, should not be viewed as being completely separate from one another. Although, as seen with the earlier sculptures, ‘science’ to some extent impinged on ‘art’, the Greeks nevertheless managed to overcome these barriers to develop and create artistic and life-like sculptures, of which many are famous and recognisable to this very day.