The Art of Bathing

With the official start of summer only days away I have been dreaming increasingly often of vast blue skies and clear blue waters and of swimming in sun-dappled pools or lounging on warm beaches. Outdoor swimming and – its less active alternative – bathing appear to have similarly gripped a number of artists over the years; a multitude of great artworks are centred on swimmers and bathers, therefore offering a taste of the pleasure and freedom that comes with such activities. In celebration of summer’s near approach, I have collected together five key pieces with this very focus. 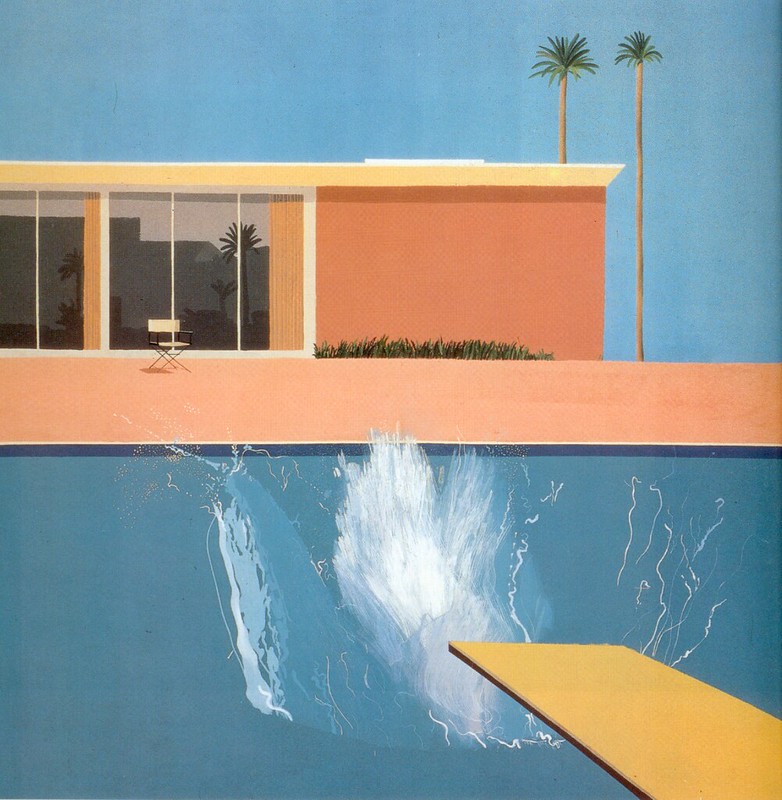 Any article based on the depiction of swimming within artwork that fails to mention David Hockney would be incomplete. His paintings of sunny California are arguably his best known – with A Bigger Splash potentially the most famous of them all – and they form a series that epitomises the popular idea of a summer in suburban California. The iconic image, depicting the impact of a dive without any actual visualisation of the diver, has an artificial feel: the straight lines, the bright, block colours and the bold shadows form a literal representation of clear skies and water that is unnatural. Its exaggerated simplicity emphasises the strong light, whilst also drawing even greater attention to the splash: just off centre, the splash stands out not only because of its position and the way that the diving board points to it, but also because of its textured composition that contrasts with the clean, smooth lines of everything else. The artificiality is also important in representing the impossibility of the subject matter: “When you photograph a splash, you’re freezing a moment and it becomes something else. I realise that a splash could never be seen this way in real life, it happens too quickly. And I was amused by this, so I painted it in a very, very slow way.” (Hockney quoted in the Tate Gallery exhibition brochure by Catherine Kinley.) 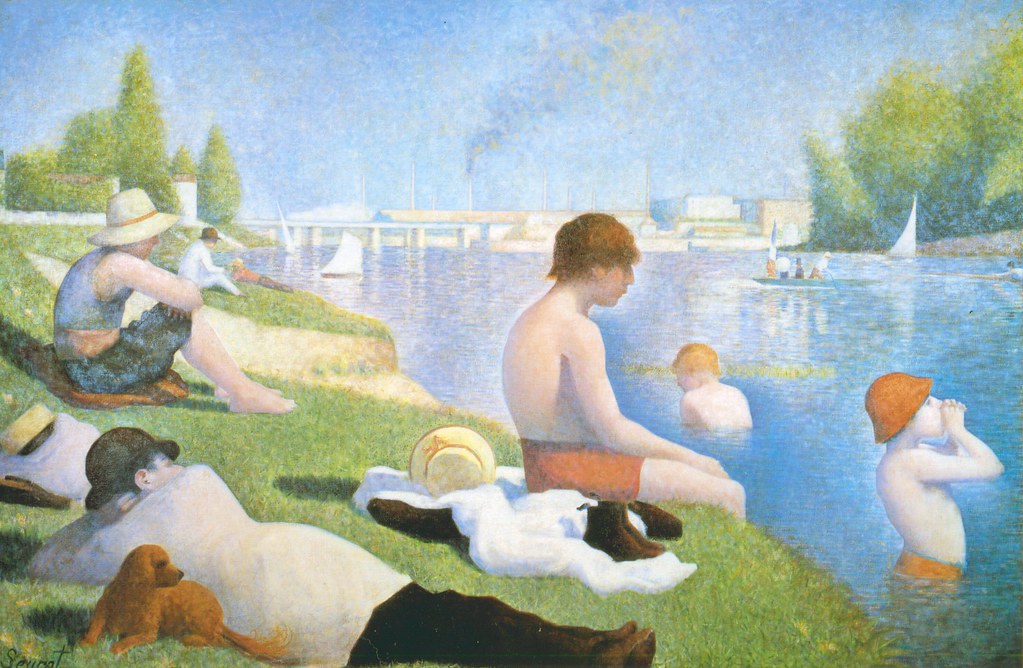 Georges Seurat has been credited with the development of pointillism: a painting technique based on colour theory, where one applies multiple tiny dots of colour to form a solid shape when viewed from afar. Bathers at Asniéres (Un Baignade, Asniéres) and its “mirror” image, A Sunday Afternoon on the Island of Grande Jatte (Un dimanche après-midi à l’île de la Grande Jatte), both benefit from this distinctive method of painting. The dots of colour provide the images with a bright haziness often associated with summer evenings that more conventional brushstrokes would not achieve. Depicting a group of young men, not of the bourgeoisie class, relaxing by the river Seine in northwest Paris, the painting evokes the sense of laziness that summer weather can bring: the strong lighting highlights rounded shoulders and calm waters, offering little sense of movement or activity.

Displayed in the Petit Palais in Paris, this is certainly a piece that draws the eye, despite its relatively small size. In contrast to Seurat’s vast and yet very still painting, Cézanne’s artwork possesses a real sense of animation. The thick, rough brushstrokes imply movement and a sense of dynamism; the leaves seem to be in motion and the water is calm but not still. It is a less “perfect” version of summer bathing – very different to Hockney and Seurat’s smooth shapes and sense of quiet. Bright tones are interspersed with darker, duller colours and the sky and water – clear, blue and sweeping in the previous two works – are obscured by plants and by the three figures. Nature is a very strong theme in this painting: women have long been associated with the natural elements and Cézanne does little to dissuade this idea. The three women appear to be entirely content and at home among the foliage, with the yellows and greens of the leaves echoed in their skin tones. Undoubtedly, the concept of bathing was one that fascinated Cézanne, as he completed over two hundred works on the topic. 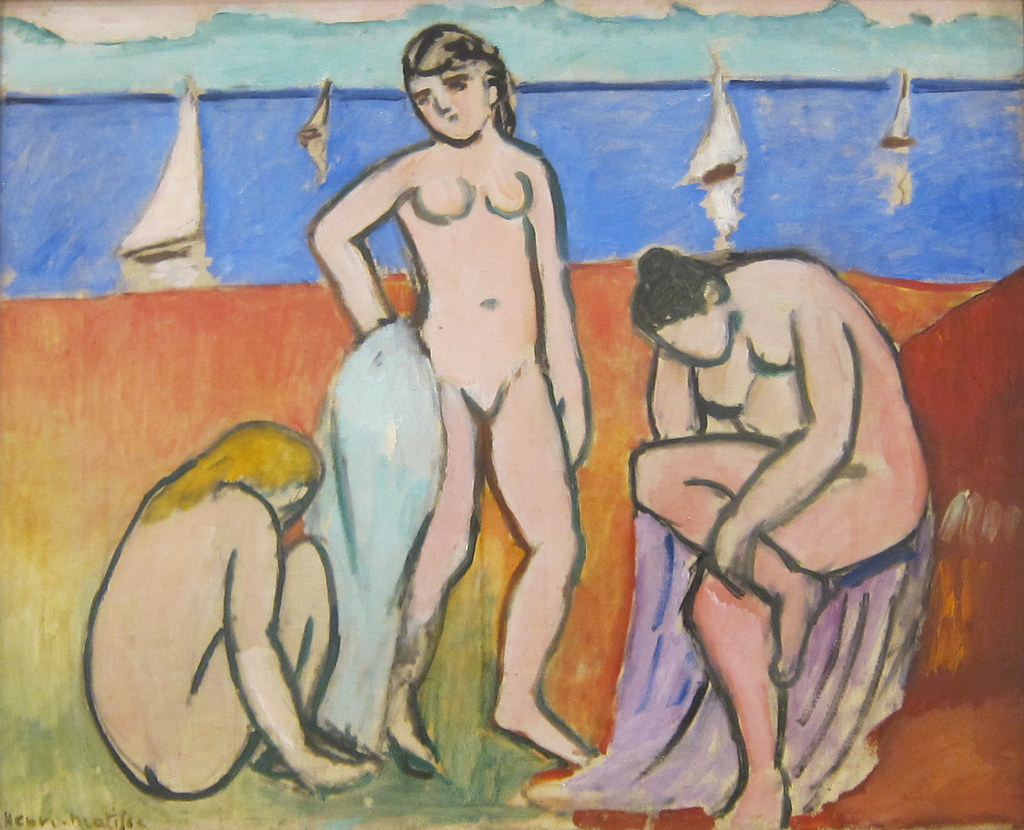 Without a doubt, Matisse found inspiration for this artwork – and for others – from Cézanne’s piece of the same name. It is immediately apparent with the similar composition of the three nude women, the first with blonde hair, the second with brown and the third with black, the central figure standing front-on, the other two with their bodies more hidden. Cézanne’s work is said to have been Matisse’s main source of inspiration, having bought it in 1899. He donated it to the Petit Palais in 1936, writing in a letter to the museum director Raymond Escholier: “In the thirty-seven years I have owned this canvas, I have come to know it quite well, though not entirely, I hope; it has sustained me morally in the critical moments of my venture as an artist; I have drawn from it my faith and my perseverance” (Matisse on Art, 1995). Of course, in other ways, the paintings are quite different: blocked colours and hard lines around the figures give the women a sculptural feel. And gone is the dense woodland: instead, four man-made boats hover in the background on a bright blue sea.

The final work is very unlike the others on this list: Up in the Air is a beautiful photograph series by Belgian self-taught photographer, Antoine Rose. Rose’s photographs provide a completely new perspective on the bathing theme: taken from a helicopter, his images offer a birds-eye view of popular US beaches, showing bathers as indistinct dots; towels and parasols speckle the sand with vibrant spots of colour. The sky is a part of the image only through implication: the focus is entirely on the bathers, with some of the photographs including just a hint of sea and others none at all. Because of the angle, shadows are minimal and thus the intense sunlight is implied through the bright paleness of the sand, the gleaming waves and, of course, the vast number of people out enjoying the weather and sheltering from the glare under vivid umbrellas. Rose’s work is reminiscent of Seurat’s pointillism: colour is key to Rose’s images, many of which incorporate matching umbrellas and all of which focus on collectives and the shapes that groups form when viewed from afar.