The art of Androgyny

In light of various events and popular conversations concerning attitudes towards gender, identity, and sexuality, it seems relevant to consider the way that they are seen and treated through some of the best trained eyes of our times – the eyes of the artist.

To get over the politics, the theories, the criticism surrounding it – the first step in forming an attitude towards something tends to be from our observation of it. A ‘view’ on something begins by viewing it. And who dedicates themselves more to viewing, interpreting, and forming a visible expression of something, than the artist?

Art has taught us about the world throughout history, whether through figural and illusionistic representation, or utter abstraction from objective reality. In any form, the artwork is an expression of views, attitudes and feelings towards something else. It stimulates conversation, representing a pictorial discourse or analogue about its subject and artist.

From the archaic period through to the modern, representations of figures have been constantly developing and being experimented with by the artist. Whether the works are intended to be explicitly illustrative of issues concerning gender and/or sexuality, it is relevant to consider them within this context. Those who wish to decode stereotypes and demystify the attitudes outspoken towards, often begin with the unconscious opinions and behaviours. In terms of artistic form, gender representation can be reduced to either a figural (illusionistic – intending to be accurate to reality) or conceptual (symbolic – expressive of the idea of the reality) representation. Historically, there has been a cultural divide in these styles, namely between Eastern and Western arts. Comparing religious, philosophical, and social practices between Occident and Orient provides significant help to decoding the methods of representation in the production of art.

To begin with, symbolisms of unity and combination of sex and gender is narrated as early as texts of Greek mythology, in the figure of Hermaphroditus, the child of Hermes and Aphrodite (see Fig 1.). According to Ovid, the male-born youth became united into a being of both sexes when the nymph Salmacis sprang upon him in her lust and had her wish granted by the gods that they should never be parted. Interestingly, this merging of sexes occurs for a deity; we could consider this as a promotional characteristic of the androgynous figure, but the issue remains that it exists as an ancient myth, a sort of fantasy tale, and something which only magical and imagined circumstances would produce, reducing the conception of it actually happening in reality. 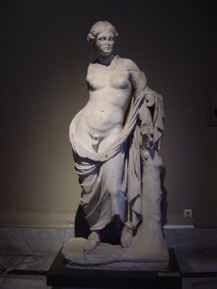 A second example of the same figure (Fig. 2), this time more recognisably masculine, nevertheless illustrates a tension, even discomfort, in their posture. How this might affect the way we regard the character is thus conditioned by the formal techniques employed to create the artwork. The gaze almost directly addresses the viewer; unnerving, intimidating, and also sign of self-consciousness and fear. The breasts are accentuated beneath the tightly-drawn robe, and the hand gestures are quite delicate in their grip of the material. The legs are of a thicker build and stand rigid, as if a sense of reservation is felt by the figure as they timidly expose themselves in front of their viewer. 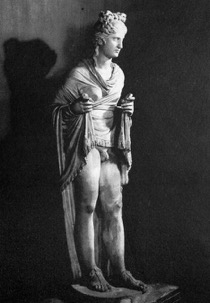 The overall posture, particularly from the pelvis downwards, is markedly different to that of the previous sculpture (Fig. 1); no iconic contrapposto measure is employed, no graceful curves or sense of fluidity between extended or contracted limbs. The Hellenistic style of the first ermafrodito from Pergamon exhibits both a curvaceous and strongly held posture, seeming to achieve a more harmonic physical representation of the merging of masculine and feminine physique. Upon the torso are sculpted muscular breasts, or, rather voluptuous pectoral muscles – their exact form remains appropriately ambiguous.

This emotional temperament, although not the first thing most analyses of classical sculpture seek out, is nonetheless important to the discussion on how we are influenced by artistic representation of this subject: the sensitivity in Fig 2., compared with the confident grace in Fig.1. Are these two different representations, or ‘attitudes’, towards androgyny? Could it depend on the purpose, location, or commission of the work which determines the ‘character’ of the hermaphrodite? Are we meant to be influenced by their physical and emotional attributes, or should we remain objective and consider these features as the artists own style and technique? Is their gender ambiguous, strange, unnerving, or even the real point of question of these statues?

In other examples, the androgynous figure has been considered to be embodied in primitive sculpture, mostly due to its considerable lack (in Western opinion) to illusionistic representation. African and indigenous sculpture – some of the most diverse and expressive of human figures – tends to abstract, enhance, and formally conceptualise features of the human body. Breasts and behinds are often voluptuously, protruding outwards almost in their pride of being female fertility symbols. Meanwhile, the male figures’ shoulders, upper thighs, hands, and genitals are treated with the same expressiveness. 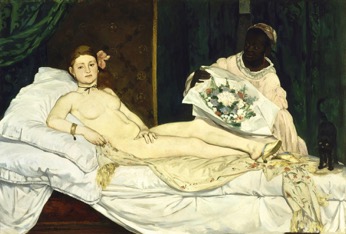 Ingloriously, the treatment of gender and sexuality particularly in Western art practice seems unable to be detached from economic conditions. Poignantly in artworks we see time and again the associations between class and appearance. No matter how pretty, unique, and mysteriously enchanting Manet’s Olympia (1863) (Fig.3) might appear to us, within her contemporary time she was considered a debased subject to be exhibited at the Salon. Furthermore, this painting is remembered for its rebelliousness and deliberate rejection of conventional form and subject, in the context of late nineteenth century French academic art practice.

Manet’s work now holds great esteem in the art world, yet it remains a point of interest as to what it is about the girl which caused the bourgeoisie such disgust at her image. Is it the recognisable brothel setting? Her un-womanly pose? Her cold, hardened stare at us? Her (lack of) dress? Her figure – rather boyish, apparently young and underdeveloped? All of these questions and their answers require socio-historical context in order to judge the painting. Nonetheless, the number of questions we are able to ask, and ought to ask, about the presentation of the girl is important to note – since she is a prostitute, how could we regard her sexuality? What autonomy does she have in acting upon it? Has she been robbed of her own genuine sexuality, since her career thrusts the practice of it upon her, without her control or admission? If this is the case, is she to some extent androgynous –

Another important thing to be aware of, is how our attitudes and opinions have changed over time. If every decade or so has a distinctive ‘look’ or ‘vogue’, this reflects a distinct popular taste and, more significantly, expectation or desire within the public conscience. If we look at nineteenth-century realism – Courbet’s Bathers (1853) for instance – our generation’s immediate reaction is, not uncommonly, ‘Wow, she’s a bit manly, isn’t she?’. How can we be sure this is a valid judgement, since why on earth would Courbet choose (and in doing so have the success with the painting series that he achieved) a ‘manly’ woman as his subject? She must be ‘the’ image of femininity to the artist, since the rest of the painting oozes grace, purity and pleasure. Or, is it because our social conscience on what ‘masculine’ and ‘feminine’ look like has drastically changed since the time of Courbet.

Perhaps one issue with the production of art which focusses on this subject, is that representation turns to a generalization, and a possible devaluation of the individual and personal experience of being transgender. Art, however, is something which encourages us to look further, particularly beyond what the art object itself presents to us at face value. Art wishes for its audiences to look deeper, to understand rather than simply accept. The subject of human character and conscience is both masked and uncovered through creative mediums, and have helped artists themselves to become aware and at peace with themselves. Surely, then, the evolution of the human identity as well as the reactions to and associations of it with gender and sexual identity, means that we ought to embrace the flexibility and diversity of these characteristics, and take art to be an exploration and celebration of selfhood without categories.