Review: Stateside at the Side Gallery, Newcastle

First, a confession. I love photography, but until recently I had never been to a photographic gallery. Sure, I’ve seen smatterings of photographs on walls next to art installations and paintings, but never rooms devoted to rows of photographs, uninterrupted. Then along came the Side Gallery. Run by Amber, a North East film and photography collective, the gallery is located a short distance up an alleyway near Newcastle’s Quayside. In keeping with this location, the interior is modest; it consists of a mere two rooms and a set of wonderfully wonky stairs in between.

The title of the exhibition, Stateside, tipped me off as to the likely geography of the photos I would find, but little else. I’m grateful for that. I can’t help but feel that photographs should be allowed freedom to speak for themselves. And boy did they speak. Stateside deals primarily with social documentary – a brand of photography that particularly resonated with a collective whose founding initiative was “to create their own social document”. Thus, the “voices” one hears from the 68 photos in the collection are as varied and fascinating as you would imagine from such a varied and fascinating country. What the exhibition seems to capture is the strata of American society: from the everyman to the eccentric, the rich to the poor, the rural to the urban. And all of these variegations put forward for our perusal in modest yet powerful black and white.

The exhibition’s social exploration is a journey that spans time and state-lines. We enter with Lewis Hine’s early 20th Century work, plough through the Great Depression as depicted by Walker Evans and Russell Lee, and flit briefly into Berenice Abbott’s smart, geometric New York before being submerged in the wit of Weegee and the grit of Eugene Richards – both in portraits of (somehow) the very same city. A pause for breath and then off again, beyond New York and into a vision of the 70s through the imagination of a suburban teenager in Wendy Ewald’s exhibition and a spotlight on American Church life by James Perry Walker. 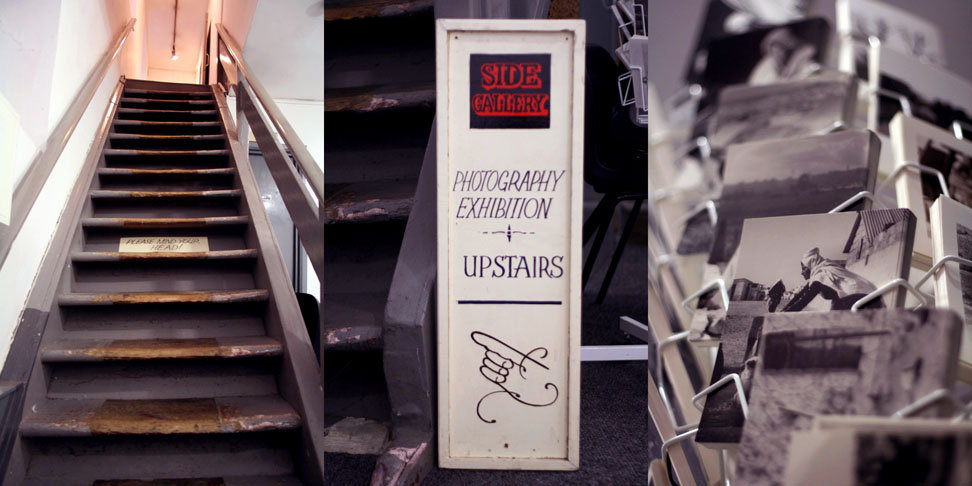 Proportionally speaking, most wall space is given over to work centred on poverty and associated themes. Two out of the twelve photographers exhibited (Eugene Richards’ Below the Line: Living Poor in America and Russell Lee’s American Mining Communities) make up 35% of the whole exhibition between them. It was also these works that I found to be particularly affecting; they were the ones that stuck with me even as I walked out into Newcastle’s busy streets. These photographs have an extraordinary evocative power. Perhaps, as one viewer commented in the visitor book, this is because “pathos runs rampant through the power of black and white”. This seems true; one cannot help but feel a sense of clarity when seeing human expression or form in monochrome, as though all this time colour has somehow been distorting and distracting, preventing us from seeing the truth that is suddenly so stark in black and white. For me, this was particularly true of the Eugene Richards’ visceral images, especially the first “Shantytown, Lower East Side, New York City”, in which he presents a tense moment of laughter from a man with a chest bare except for a rosary, through a mesh fence which forms a barrier at once permeable and impermeable. We are so close to the subjects as to see and read their expressions, their posture, and yet there is no getting around the existence of the fence between us.

Side’s Russell Lee collection is a tour de force. Lee offers the viewer images that feel honest, drawing us into intensely personal aspects of everyday life during such a harsh economic climate. He brings us to the dinner table, living quarters, bar, schoolroom and workplace of the Great Depression with him, painting a vivid picture of the wide-reaching effects of unemployment. Lee’s portrait of a mother and her three young children, “Weslaco, Texas, 1939”, serves well as representative of his style. The photo conveys a powerful sense of captivity, the family crammed into the tight space of Lee’s viewfinder, but also into the corner of a claustrophobic wooden hut – the wall behind the young boy can’t be more than a metre tall. Indeed, the hay that litters the dirt floor and the soiled mattress, torn and spilling its innards, do much to invite a comparison with caged animals. In spite of these indelible marks of poverty, however, Lee finds human resilience and spirit in the situation. Mother and daughter, features so alike, wear expressions that defy their situation and don’t ask for pity. Indeed, the daughter’s protective expression and pose seem to form a challenge to the person-as-viewer: you are watching, but what are you taking from that action? Are you with us or against us?

As wonderful as the power of Lee, Richards and Evans’ work was to encounter, it was also what I expected from the exhibition. The playfulness of Weegee and Denise Dixon, on the other hand, was not. Through Dixon’s lens, one is transported to the world of childhood, a comforting departure from the worries of reality. She shoots her brothers as “creatures from outer space in their spaceship” – priceless with stockings tight on their faces – and includes sincere self-portraits and baby photos alongside those of Spiderman dress-up sessions, John Travolta and Bewitched on TV.

Weegee’s 14 photos do not lend themselves so easily to generalisation, but what does become clear is that his perception of New York was coloured by celebrity and novelty. In a surprising number of portraits of the photographer, he is shown always with a signature cigar in his mouth, and more often than not also accompanied by his large box camera and something or someone commercial – whether that be Mrs. Cavanaugh, a playboy “bunny girl”, or a poster bearing the name of his book. This photography is very much about persona rather than person. Even when his photography appears on the surface to take a more serious documentary turn, as in his “Simply Add Boiling Water”, there is humour to be uncovered. Beneath a photo of a building being hosed by the Fire Department lies a play between the recently extinguished flames and the flame-like, energetic water jets; between the wry “Simply Add Boiling Water” emblazoned on the building and the sombre presence of an ambulance in the shadows on the road beneath the excitement.

In case you hadn’t guessed, my first trip to a Photographic Gallery was a resounding success. In being fully submerged in photography, rather than just encountering it amongst other art, my mind was better attuned to the language of the medium. A reasonable indication of a good photo is your gut response to it, and I venture that the same is true for photography exhibitions. In viewing Stateside, I was moved, surprised and intrigued. Not bad for a gallery down an alley.

Though Stateside finished on the 18th September, Side Gallery’s current exhibition – Don’t Call Me Urban! The Time of Grime – runs from the 25th September to the 20th November 2010. Entry is free.

Find out more at www.amber-online.com.