Reactions to “Recorders”, the latest exhibition by Lozano-Hemmer at the Manchester Art Gallery 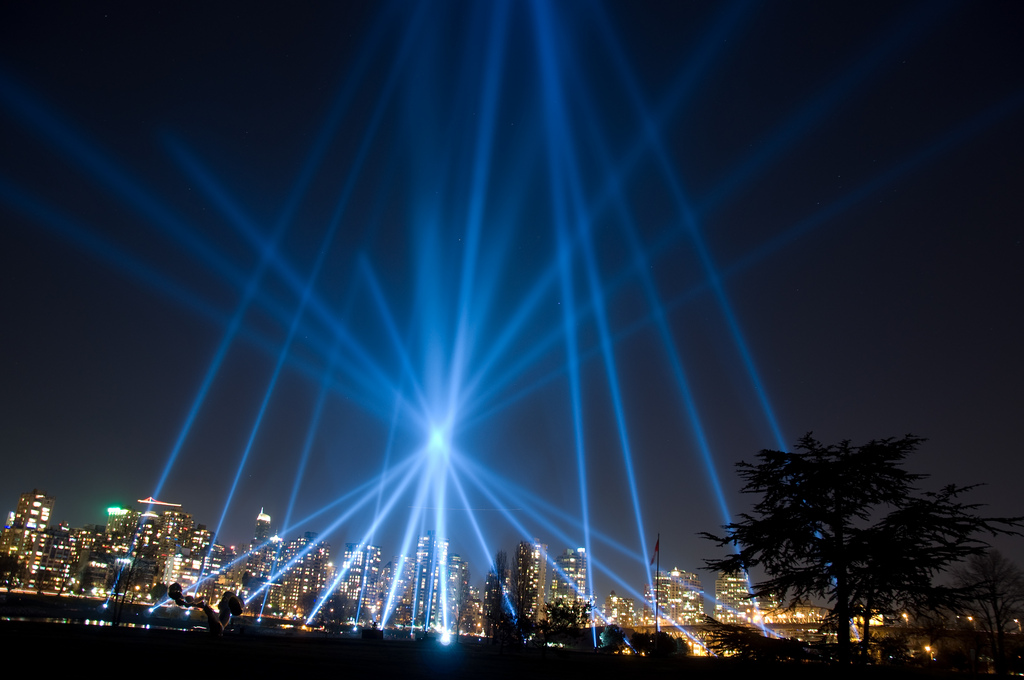 The Mexican artist Rafael Lozano-Hemmer has a predilection for big, playful, social artworks – and light beams, definitely light beams, which play a big part in this man’s mission of dragging art out from the hallowed atmosphere of the gallery and into the playground of the streets. In this arena, walls become play-things, fleetingly plastered with out-size images of ephemeral figures, letters, the silhouette of a hand, whilst those strident yet allusive light beams pulse into the night overhead. These are not just the amusing tricks of a showman, moreover – or, even worse, gratuitous impositions on their environment – for Lozano-Hemmer’s works all display his knack of creatively taking up and gloriously enriching city life. Connections are forged simultaneously between individuals and between the individual and its environment via a healthy dose of interactiveness which opens up the possibility for participant-generated, meaningful collective experience. In “Displaced Emperors”, for example, sensors would follow the direction of the hands of visitors to the Hapsburg Castle in Linz as they pointed to it, thus triggering the appearance of a corresponding pointing hand projected onto the surface of the building. However, rather than indicating something related to the castle, this hand conjured up the projected interior of a Mexican house. Meanwhile, “Body Movies” projected previously taken photographs of people onto the outside of a building, which were nevertheless only manifested within the silhouettes of those walking in front of them.

People, places, time, space – all collapse into a crucible of potential throughout Lozano-Hemmer’s work, which riffs on themes to do with technology and society: how the one can force the constituents of the other apart, or yet bring them together. Broadly speaking, many of his projects play with and subvert the gathering of data in our surveillance-obsessed culture, as the technology used by governments to keep track of its citizens is ironically deployed as a force for the negation of its habitually alienating effect. Rather than functioning as tools of mass control, projectors, cameras and spotlights are co-opted into service in an art which gathers up our potentially fragmented experience of modernity and offers it back to us through the redemptive means of collaboration.

Lozano-Hemmer carries this sense of a fundamentally connected society with him on his returns to the confines of the gallery. In this case, the Manchester Art Gallery plays host to the seven installations which comprise Recorders, all again confounding the traditional aims of surveillance through the redemptive possibilities of collaboration and participation. Amongst other things, the public is treated to “Please Empty Your Pockets”, otherwise known as a conveyor belt that accumulates scanned images of the objects placed on it by visitors; and “Close-up”, which plays back a mosaic of tiny videos of previous onlookers when triggered by the silhouette of the present viewer. Thus are the means through which people are watched, tracked and scrutinised incessantly finally wrestled into submission to humanity. And, more importantly than anything else, these works are as delightfully fun to experience as they are compelling in their invitations to contemplation.

For me, the most successful work was “Pulse Room”, where concept and execution really did combine to create something aesthetically and intellectually stimulating. It involved the devilishly ingenious manipulation of technology as a means of creating a suspended network of light-bulbs, each of which flashed on and off to its own rhythm as determined by the pulse of individual visitors. Cumulatively, they formed a suspended sea of dancing light overhead – hypnotic, delicate, energetic – a real Morse code of the soul. The power of the pulse seems to exert a continued allure over Lozano-Hemmer, who makes a features of it in several works wherein its potential to communicate a visceral and powerful statement of the interaction between humans and technology is revealed. It is variously transmuted into beams of light (no surprises there), water waves and recorded alongside photographs of their pertaining fingerprint as in “Pulse Index”, another component of Recorders.

In addition, “33 Questions” made a strange kind of meaning out of the fragments of the language through which we constitute our experience. Words are customarily presented as seamless parts of a system, in and through which the ideological positions of a society are inscribed – a system which we are seldom brought up short to question. However, here Lozano-Hemmer here shows language broken down into its constituent parts, as humanity and technology collide in the name of beating “The System”. The work takes the form of small green screens, akin to pagers, which are connected through wires and which are “fed” by a computer program that grammatically combines words from a dictionary to form randomly generated questions at a rate of 33 per minute. Words are plucked out of their habitual context, and yet a new, nonsensical “language” is re-assembled which reveals their latent power. True, this act of plucking does not necessarily divest words of their received freight of cultural meaning, but it is the in the way in which evocative new connections spring up between them, as each at once destabilises and yet enriches the meaning of its neighbours, which makes ordinary words almost seem like the talismans of a new religion. Visitors to the gallery are encouraged to submit their own questions, several of which are displayed – we are all priests here.

However, the above fit of overstatement does represent the very heights of my reactions to Recorders. Whilst all of the above works are undeniably engaging, my responses to them were mainly on the “hmm, that’s a really cool idea” kind of level. The overall scale of ambition feels modest rather than grand: not exactly the work of a man about to finally overthrow ’The System’, but one happy to tinker away within it, creating minor subversions where possible. In fact, this is probably more the idea of the whole thing – Lozano-Hemmer quietly reaffirming the importance of a sense of curiosity and play in our times. For it is through these qualities that the individual can avoid the fate of being overmastered by her gadgets and the cameras which “protect” her, rather feeling empowered to use them as tools of connectivity and creativity: a prescient thought indeed.