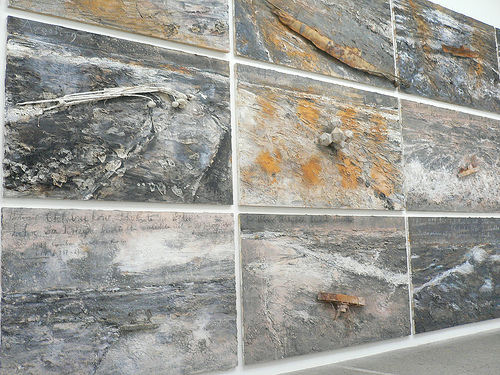 A 30-foot long palm tree lies dead on the floor of a spacious room, around it a series of 39 paintings neatly align the walls containing plastered plant matter and doll’s clothes, on the wall adjacent the words Dominica in ramis palmarum are written. This is Palmsonntag, an immense installation on display at Anselm Kiefer’s ARTIST ROOMS on Tour exhibition at the BALTIC Centre for Contemporary Arts in Gateshead. The UK-wide tour, spanning from St. Ives to Orkney, is the result of collaboration between the Art Fund and the Scottish government, which aims to bring the ARTIST ROOMS collection of over 1000 works by contemporary artists such as Andy Warhol, Joseph Beuys and Damien Hirst to galleries throughout the UK. The collection compiled by dealer, collector and curator Anthony d’Offay was jointly acquired on behalf of the nation by the Tate and National Galleries of Scotland in 2008, and is one of the most generous donations ever made to Britain’s galleries, fuelled by the vision of making great art freely accessible to the public, and to the younger generations in particular.

The premise behind ARTIST ROOMS is to exhibit the works of individual artists so that they can be explored in isolation. The BALTIC, a converted industrial building, is the perfect location for work of Anselm Kiefer’s scale, with its vast gallery spaces, high ceilings and large walls capable of displaying two floors of Kiefer’s work. The exhibition, which spans forty years of the artist’s creativity, is the largest display of Kiefer’s work to be shown in the UK in many years. The diverse selection ranges from his early pieces preoccupied with German history and identity, to his more recent works which explore religion, and the symbolism of other cultures. The heavy subject matter of Kiefer’s work is reflected in the fraught canvases and monumental installations which bear down on the viewer both physically and mentally. Kiefer’s painted canvases are mounted with thick layers of found materials such as dirt, ash, shellac, lead models and organic matter, which hark back to his mentor Joseph Beuys’ use of animal fat and rolls of felt, and create a new space between painting and sculpture in which to engage with the audience.

Palmsonntag 2006 is featured in its own room on the upper floor of the exhibition, a testament to its overwhelming physical presence. The series of 39 paintings, which overlook the giant full-sized palm tree, contain palm fronds, tree twigs, and doll’s clothes suspended in earth and plaster. The paintings evoke a sense of desolation, emphasised by the cracked palette of burnt sienna, grey, white, black and ochre. The English translation of Palmsonntag, Palm Sunday, is a Christian holiday which for Kiefer symbolises the moment between triumph and destruction. The holiday marks Jesus’ triumphant entry into Jerusalem which sparked the sequence of events leading to his death. However, in this work Kiefer suggests the possibility of resurrection. The position of the palm tree on the gallery floor echoes the body of Christ before his resurrection. Amidst the desolation of the work there is a sense that things have been preserved rather than destroyed. The plastered foliage, dried up earth, and the fallen palm tree with its mud clotted roots could be given new life by a great flood gushing through the gallery, restoring the work into an oasis. However, instead of making an explicit religious statement, Kiefer’s installation uses the Christian narrative to explore the themes of death, renewal and belief, which feature throughout his work.

The theme of death and destruction is explored in Anselm Kiefer’s Parsifal cycle 1973. The series is made up of four paintings of which three have been acquired by the Tate and loaned to the BALTIC for the exhibition. The sequence of paintings takes its name from a 13th century romance by Wolfram von Eschenbach, based on the legend of the Holy Grail which became the inspiration of Richard Wagner’s last opera. Kiefer’s wood textured canvases turn his artist’s studio into a stage where ghostly artefacts appear, including a baby cot, two swords and a spear. In Parsifal II, Kiefer uses real blood to paint the name of Ither, Parsifal’s defeated enemy, above his shattered sword which suggests that there is something more sinister lying behind these mythological references. Much like Herzelayde, Parsifal’s mother, who tried to shield her son from the violent knighthood of his father, the post-war generation in Germany were traumatised by the atrocities of their recent past. Through Parsifal, Kiefer confronts Germany’s brutal history with the hope that through art he can heal a divided world.

Despite the impressive nature of both Palmsonntag and the Parsifal series, my favourite work in the exhibition is Anselm Kiefer’s Man under a Pyramid 1996. In this painting a man lies flat on his back on the bottom of the canvas. A pyramid piles above him built from layers of emulsion, acrylic, shellac and ash on burlap, and extends up into the starry night sky. It has been suggested that this is a self-portrait of Anselm Kiefer; some have interpreted the pyramid as the yellow brick road from the Wizard of Oz. Regardless of differing interpretations the work suggests a journey towards a spiritual land. The ancient pyramids of Egypt were used to demarcate the presence of a tomb and were structured using stepped walls in order to allow the deceased an easy passage into heaven. However, Kiefer’s figure is still present underneath the pyramid. I find Kiefer’s interest in the link between the body and the mind the most fascinating facet of the painting. Is this man dead or dreaming? I view the painting as a depiction of the weight of modern life bearing down on us both physically and mentally, so that we are reduced to comatose bodies buried under a lofty pyramid which tantalises us with the false hope that we can reach some form of enlightenment.

With just over a month to go before the exhibition ends on 16th January, 2011, it would be a shame to miss out on experiencing Anselm Kiefer’s ARTIST ROOMS on Tour exhibition first-hand, as it is only in the physical presence of these works that their power is fully felt. Anselm Kiefer’s reputation as one of the most significant artists to emerge from post-war Europe is certainly deserved. ARTIST ROOMS on Tour with the Art Fund began in 2009 and its continued support from the Art Fund and Scottish Government ensures that the collection will continue to be shared with galleries and museums in 2010 and beyond.