Mary Cassatt: A Painter of Women 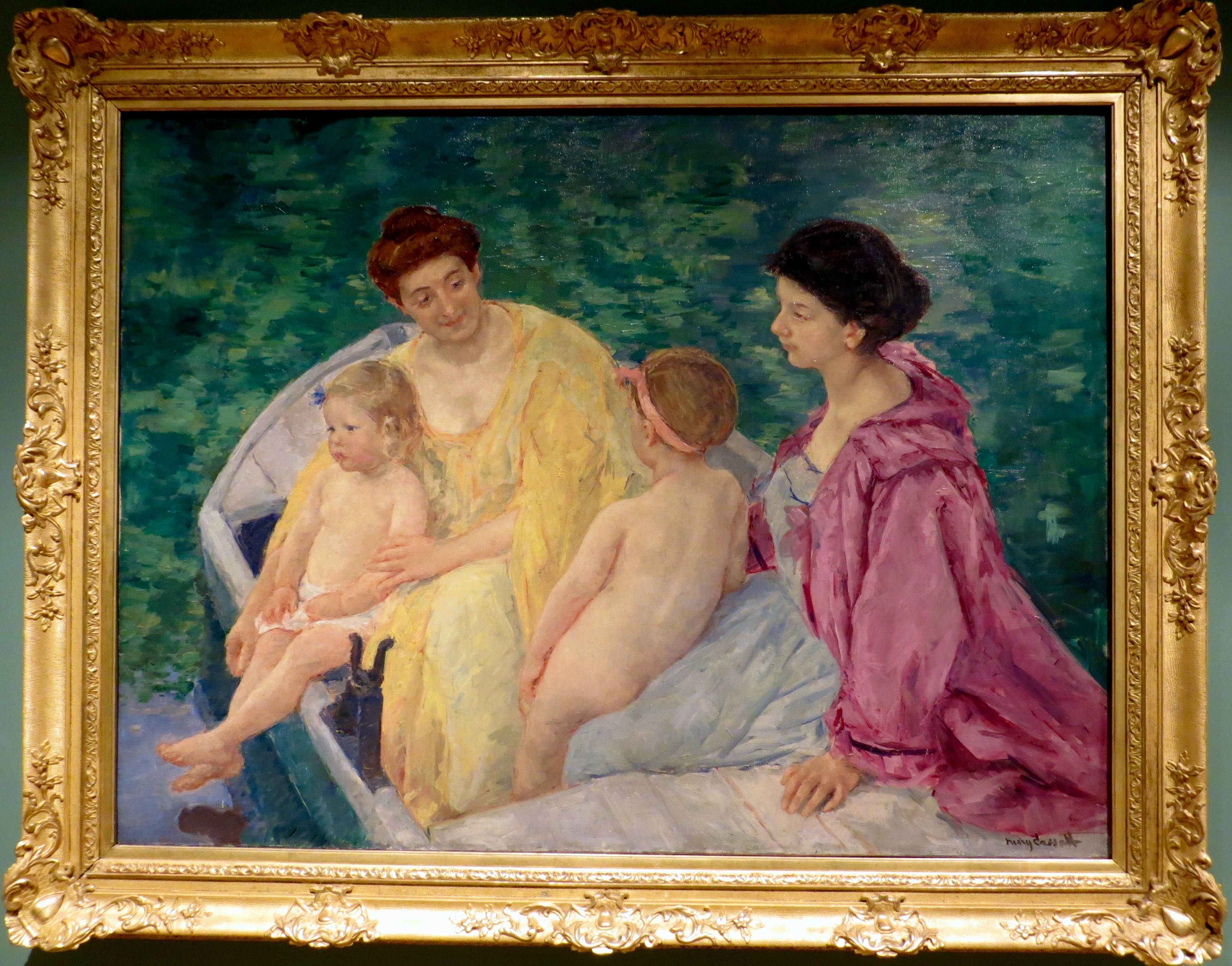 I first discovered Mary Stephenson Cassatt whilst on a trip to Paris with my mother last summer. Having wandered around the Jardin des Tuileries and explored the Galerie nationale du Jeu de Paume, we chose to visit the nearby Petit Palais for some more traditional fine art. Housed within a beautifully ornate building that encircles a courtyard and garden is a treasure trove of art, varying widely in style, period and material. It was in Salle 8 that I found myself drawn to Cassatt’s Le Bain (Two mothers and their children in a boat) – an oil on canvas painted in 1910. A wonderful piece that exudes tranquillity, I was particularly struck by the beautiful colour palette, which includes tones that are at once vivid and soft. It is an image of contentment and one that seems to epitomise a lazy summer’s day: two women and their children relaxing in each other’s company; the calm, still surface of the water a reflection of the mood, as well as of the boat, child’s feet, and implied greenery.

An American who moved to Paris and became close friends with fellow Impressionists Edgar Degas and Berthe Morisot, Cassatt (1844–1926) was a leading artist in the Impressionist movement. As is immediately apparent, even from a quick scan of her work, Cassatt very much favoured portraits and, in particular, those of women and children. In fact, except for a few portraits of male family members, paintings of men by Cassatt are incredibly hard to find. Those that exist feature men as background characters, often hatted and with their faces in shadow – more a suggestion or reminder of a male presence than a subject. 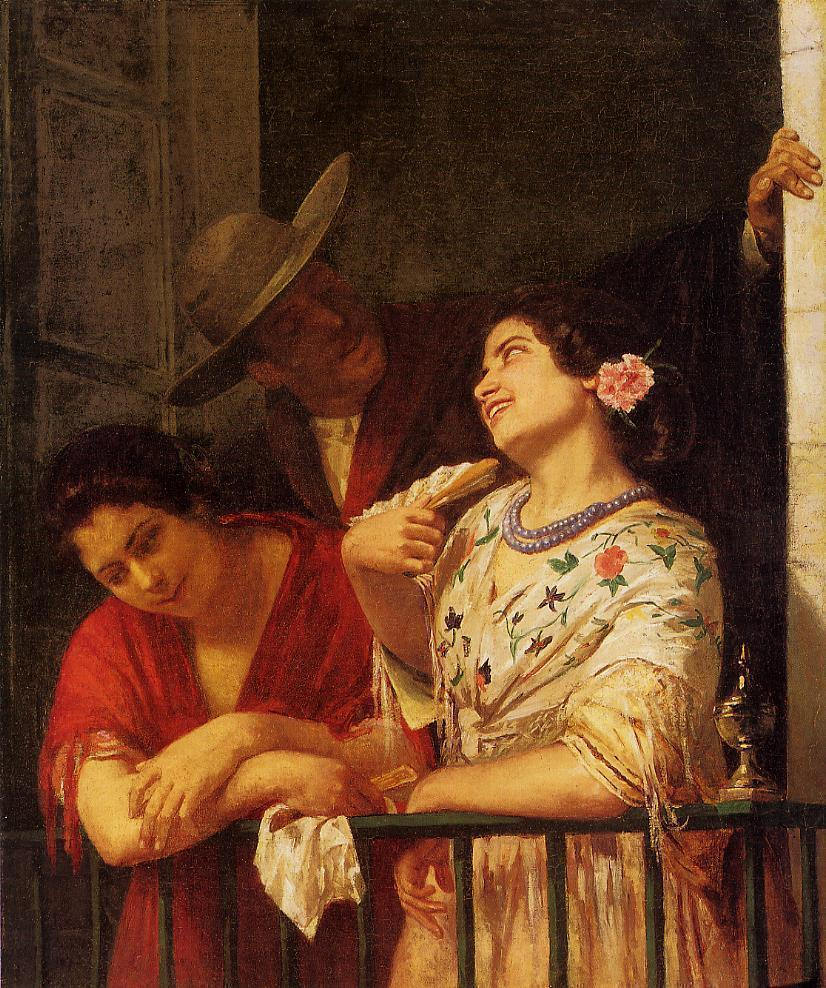 Mary Cassatt: On a Balcony During Carnival (1873)
Image: Public Domain via Flickr

An example of this is Cassatt’s On a Balcony During Carnival (1873) – also known as The Flirtation – On a Balcony in Seville – which shows two women with a man standing behind them. Of the two, one woman is particularly radiant, her head cocked and the bright sunlight illuminating her skin. It is she who garners the most attention – both from the viewer of the painting and from the man positioned by her. Her glowing complexion and the light, delicate texture of her clothes is in direct contrast to the indistinct features of the man and his dark, heavy coat. Almost fading into the shadows of the painting’s backdrop, it is evident that his individuality is unimportant: he is there to represent the male and to play his part in “the flirtation”. Although his figure is noticeably large – his frame towers over the two women and his arm is extended to increase his size further – the fact that his features are distorted by shadow and that the women hide the majority of his body – his great size being only an insinuation – means that his presence is far from dominating. Instead of looking shyly away, as female recipients of male attention have often traditionally been portrayed, the woman holds his gaze assuredly, her stance confident and at ease, in control of the situation.

A similar scene is captured in Cassatt’s La Barque (1893), in which “we see men and women playing the same roles – each observing the other with equal intensity. Though the woman is still the object of the man’s attention, he is also the object of hers.”[1] Thus, Cassatt achieves a sense of equality in her work and begins to move away from the traditional “male gaze”. 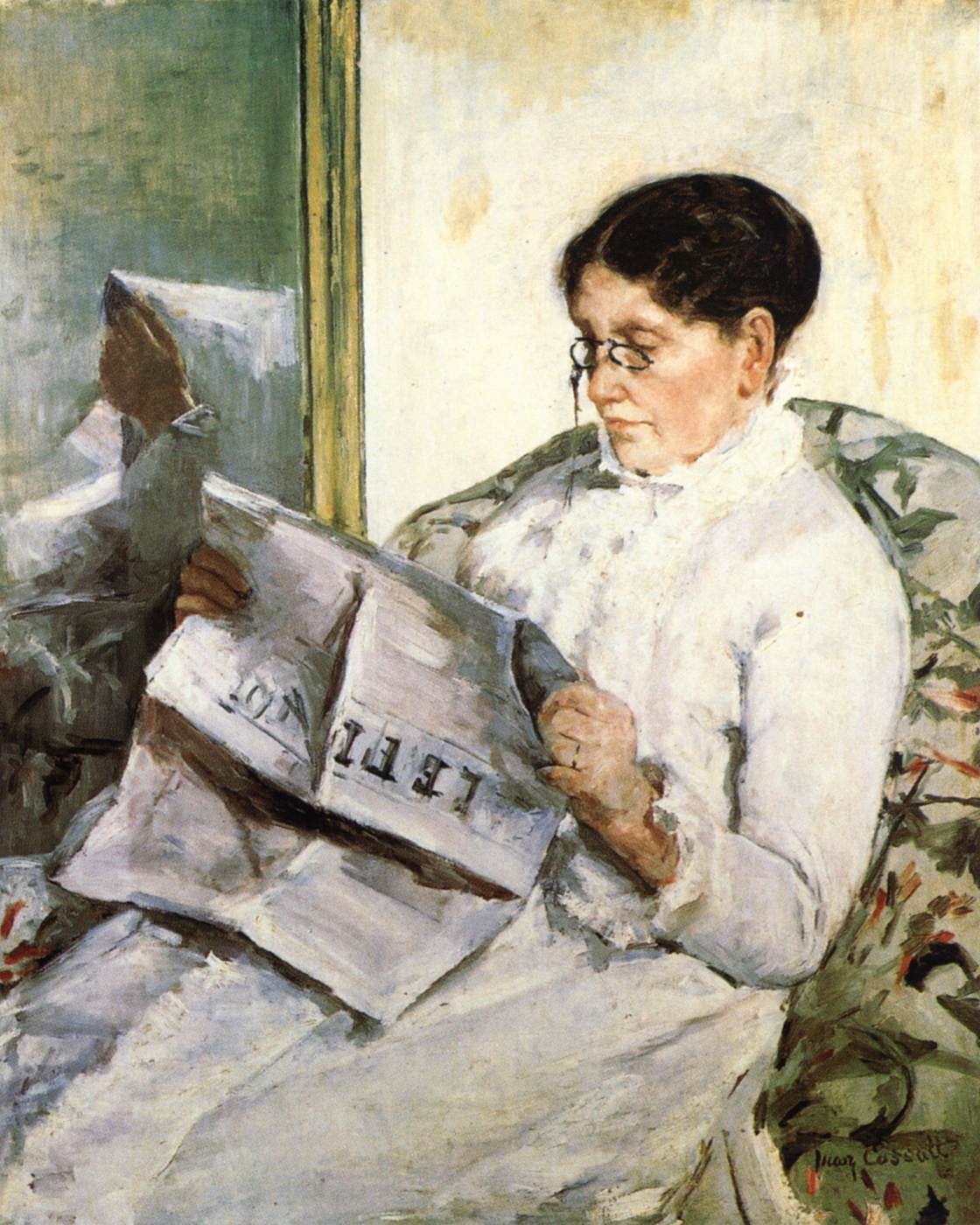 Among the numerous examples of Cassatt’s portraiture, Reading Le Figaro is one that stands out thanks to its subject matter and its simple, cool-toned palette. The painting shows Cassatt’s mother reading a newspaper – unusual, in that women were rarely depicted engaging in such a “masculine” intellectual activity. Women might be portrayed reading but, typically, something more acceptably “feminine” such as poetry or a novel. Instead, Cassatt’s mother is reading the front page of a national newspaper. This suggests an interest in current affairs and news, as well as knowledge of the French language, and thus reinforces the image of a well-educated and intelligent woman.

Cassatt is undoubtedly a painter, first and foremost, of women – of mothers, daughters and friends. Her work offers an insight into the world experienced by (arguably privileged) women in Paris in the late 19th and early 20th century. Degas is frequently identified not only as Cassatt’s friend but also as one of her key influences, with the artist himself claiming that Cassatt’s work reminded him of his own. However, a crucial difference remains between the two: Degas’s pieces are voyeuristic – they are of women but produced by a man. Many of his pieces go so far as to include male figures on the side-lines, watching over the female subjects from a distance. Cassatt, on the other hand, is a woman painting women. Accordingly, the women in her paintings take a far more active role within their frames. They possess a relaxed air of confidence: a sureness of self that implies a sense of freedom and control. Arguably, a woman providing a snapshot of her own world feels more intimate and honest than one perceived from the outskirts by a man – one must remember that nineteenth-century Europe saw far greater gender segregation in terms of everyday life than we can generally observe here today. Cassatt’s work is, therefore, important not only because of its beauty and feeling, but for its role in acting as a window to a portion of female society in the 19th and 20th century.