The many faces of Picasso: ‘Portraits’ and the subject of ‘caricature’.

The mention of the name ‘Picasso’, to the popular ear, instantly projects scenes of colour, abstraction, passion, white-striped shirts. He was a master amongst a generation of painters who experienced all means of social and cultural uproar. His character is as bold and iconic as his works, both of which elevated the ‘artist’ figure to a new level of public and commercial celebrity. To this day we appreciate this notoriety, and continue to use it in references to various types of art and culture. What the National Portrait Gallery unveils in its new exhibition ‘Picasso’s Portraits,’ is an enlightening history of the progress of one specific subject – the human being.

Unsurprisingly, the gallery in earliest January was very much flooded with visitors, like little flies whirring around in the air, pausing to land upon the artworks, which hung like precious jam pots, contemplating and seeking to absorb some of their flavour. Unusually, there seemed no real direct path through the exhibition. In the first instance, this proves rather frustrating; since we anticipate having the story of the hero Picasso narrated to us in as proud a way as it has been over the years. People fervently seek an action-packed array of his work, with equally punchy and telling information to accompany it. Walking through the entrance to the exhibition however, opens up to a sort of crossroads, offering smaller entrances to individual rooms, all occupying a certain period, style, or subject that the artist concentrated on and worked to develop during his long career. Perhaps, it was as potentially confusing, yet inviting, as a human face.

One of the first rooms open to exploration exhibits surprisingly ‘un-Picasso-esque’ sketches, caricatured doodles tending towards 1920s European cartoons. Realist works pop up now and then in between rough pencil and charcoal studies. Drawings from life, portraying rough attempts at accuracy and rugged resemblances of the person as subject, offer as examples of a juvenile yet deeply studious technique, which the artist was developing at a furious rate. This technique was diversified through close figuration and wholly expressive, impulsive lines. These works document Picasso’s exploration into the complex human subject, with a particular aim to represent and capture it through employing the individual personality to dictate the style and method of picture making. Despite their obvious resistance to illusionism, the formal techniques used for each are powerfully mimetic of the temperament of the person they portray.

Great attention has been given to the biographical information provided for each of Picasso’s numerous key female subjects, notably Dora Maar, Marie-Thérèse Walter, and his first wife Olga Khokhlova. A whole wall is dedicated to a chronological timeline of socio-historical events alongside the person milestones of Picasso; beginnings and endings of love-affairs, political shifts, movements around Europe. The form and feel of the portraits, then, are the most exquisite kinds of diary entry of the subjects’ mood and experiences in their own time. Tensions within a relationship, alterations in character over time, or signs of personal development can be traced through comparing the painterly representations of the person. Underlying common motifs are also detectable between the different works, proving that despite his abstraction of form, Picasso was intent on capturing the essence of the individual and tracing their very nature into his work as the framework of the piece as a whole. 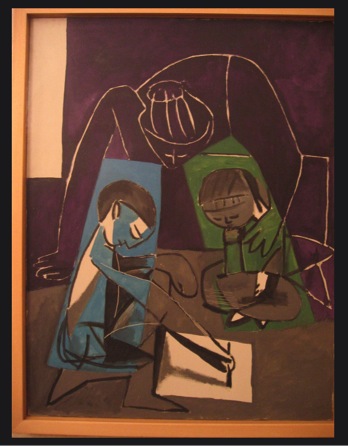 This picture of a mother and children presents clear character and deep sentiment in reference to the subject and the domestic scene. The mother’s long, smooth arm creates a strong arch, which frames the young boy on the left; it is both protective and comforting. Painted as only a white outline whilst her children occupy blocks of varying colours and shades, gives the impression of the mother’s nurturing presence both above and at a distance to her children, sheltering their expressive, juvenile activities. The deep purple in the background evokes an atmosphere of calm against the boy’s contemplative act of drawing in bold light blue. The colour purple is nevertheless also able to offer complement to the young girl’s subdued jealously (indicated in the use of green) at not being able to engage in his activity. As both a reflection and contrast to the mother’s form, the boy’s trunk-like arm extends at a strong angle to the page on the floor; his head bowed, he appears deep in thought and totally absorbed within himself. In fact, all of the heads here are bowed downwards, whether as a convivial sense of being at peace and affection, or perhaps in a more solemn way. The boy in blue certainly seems to stand out and be placed in the forefront of the composition, although in general the work depicts a two-dimensional picture space anticipating Picasso’s later evolution of the Cubist tradition. In this example we see how Picasso employs a rawness of line to convey character in each of his subjects, holding them within an environment, which is designed to contribute to the communication of the mood and emotion of the scene. 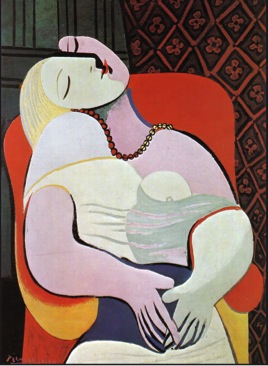 Here in ‘The Dream’ (1932), Picasso portrays supposedly his then-mistress Marie-Thérèse Walter in a colourful, fluid way, which markedly anticipates the Fauve style of smooth, soft lines, bold tones, and sensual delights. The piece is quite clearly erotic, with the young woman’s head occupying a rather extreme form given the context, but which nonetheless is able to, however crudely, communicate their intimacy and Picasso’s obsessive reverie of her and what she means to him. As a psychological representation, the painting is strongly expressive of the split personality, or boundary between consciousness and unconsciousness in sleep, conveyed in the split yet complementary colours of greenish-cream and delicate pink; expressing the union of bodies in sexual intercourse. On the side of her body, which appears to us on the right (pink neck/shoulder/cheek), the slight exposure of the breast and fully relaxed arm draped onto her lap shows her open eroticism and consent to offer it to the onlooker. The striking red chair might be symbolic of the underlying passion of the woman; even in her rest she emits both grace and an energy of intimacy and pleasure to the viewer. In the way that Walter is portrayed, we can appreciate Picasso’s warmness of affection as well as impassioned attraction towards her as his artistic subject and in real life. It illustrates in many ways the warmth, pleasure and comfort she might have provided for him, and aesthetically represents some fantasy of the female form in marriage with the theme of the painting as being within a dream.

Even between these two paintings, the similarities and significant differences can and should be drawn; what the exhibition as a whole is able to prove is the sheer diversity and extent of Picasso’s study of the human form, face, and above all character. It suggests that what Picasso was most interested in is not ‘what’ his subjects ‘looked like’, but who they were altogether, and that who they are must be prioritised as the thing to be captured in a painting of them. Such a principal genre as portraiture is taken by Picasso and re-worked with human feeling and the power to communicate it. Walking through the gallery, everyone seemed intrigued in each of the subjects and who they were; why they were portrayed in such ways; why there were so many or so few of the same person; why was one feature always dominant above any other; why that person was that shape, that colour, that large or small etc. These portraits ask the audience to get to know them, to understand them and dedicate as much time as one would do so in order to understand the person themselves. An innovation is achieved therefore within the practice of portraiture, in that each piece is empowered through its uniqueness, just as we as people are empowered by ours.

For more information: The National Portrait Gallery in London. www.npg.org.uk.