Manifestations of Madness: Ancient Natives & their Wild Arts in Africa and Ancient Greece.

‘A powerful magic rhythm, a frenzy of sound and movement, of hysterical dancing, bacchanals, where all art is lost to fury, to delirium, to rampant obscenity…’ 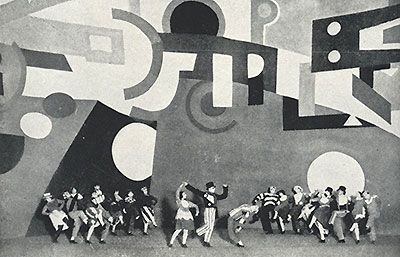 The Ballet Suedois – Sourced via Wikicommons

‘Negrophilia’ – a cultural and artistic movement which swept across France in particular, having transmitted its influences from black renaissance America in the early twentieth century, might seem a more than far-fetched subject of study against ancient Greek arts and performance. Nevertheless, one true fascination of the arts is in the way that they intersperse, across continents and cultures, revealing the deeper socio-historical connections between the human race and its creative nature.

Of course, Africa and Greece are not, in the grand scheme of things, at too far a distance from one another. Its associations with Egypt remain notorious, yet it was the deeper body of Africa which particularly European creative-types sought after in the 1920s, devising entertainment which delivered a form of escapism also to its audience as an exotic, explorative, and novel performance symbolisms, practices, and cultures struck together. It represents an investigation into the unknown and the thrill of experiencing entirely new forms of expression and thought. These examples are of both an international (Africa-France) and intra-national (Greece, amongst its islands and territories) exploration into this enticing side to human nature. What they seem to share is an engagement with the female figure, with the primitive, and most strikingly, a sort of psychological dramatization of de-humanising experience, extracting its representation from that of the norm and making sophisticated theatre out of the savage. In Greece, this was a version of light, coquettish entertainment, whereas in post-war France, this form of theatre came to allegorise a far less exultant escape into fantasy. 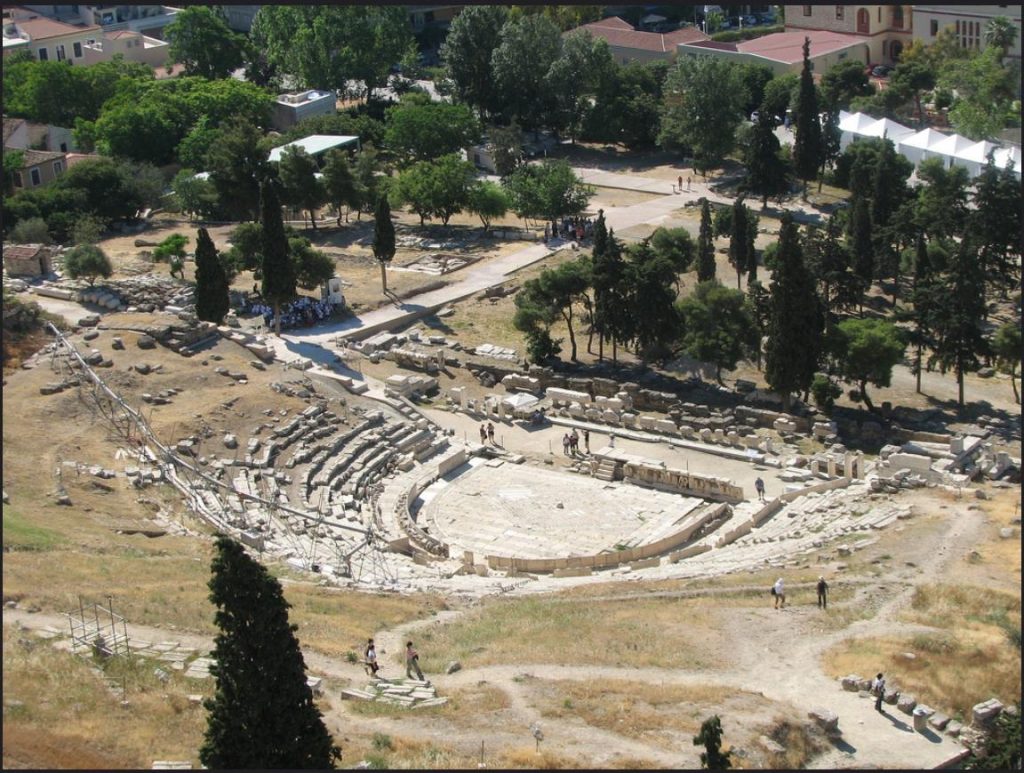 Performance, throughout history, has remained one of the most revered and recreated contribution to artistic culture. Ancient Greece itself saw the birth of theorised drama and artistic narrative, meanwhile in 1920s directors and producers were plunging audiences with great success into new worlds, reflections on their own condition, and in the case of the Negrophilia phenomenon, subverting all formalisms of the bourgeois theatre scene and converting them to aweing at the ‘strange’ sights in front of them. The Ballet Suédois in Paris significantly relates to the dramatic performances of the dithyramb, which were executed and held at the festivals of Dionysus – iconic events which pioneered in the development of the Greek theatre. La Création du Monde (1923) marked a radical invention of costume and stage design, with the show being led by Fernand Léger as a brand new, and very alternative, attraction to the high-life entertainment scene in Paris. The world born out of chaos, which is the narrative of the piece, refers to an almost primeval time – before and without any relevance or reference to the creation of the world by God. This echoes therefore the era of the archaic Greece, whose entire social and cultural structure was formulated in the context of the system of rule by the gods of Olympia. Bound up in myths, intimacies, and rivalries, their lineage and legacy have inspired centuries of generations of dramatic, visual, and linguistic art, all of which were the subjects of devotion and inspiration for Greek layman, ruler, and artist. That the Ballet Suédois thematically inspired its production with African folklore mythology is therefore an interesting correspondence. Furthermore, in the context of ‘creation’ being dramatized, it has been observed that:

One the one hand national Negro art was created as part of a religious cult and on the other it was closely connected with everyday life… This religion had appeared as a consequence of an unconscious striving to obtain a defence against outer misfortunes. Despite such a plethora of gods there is a harmonious system, united around one god.’

Moreover, Vladimir Markov’s article ‘Negro Art’ pays great attention to the influence of Byzantium in particular upon African art, which he notes as ‘evident in the ornamented chairs, saddles, goblets, cover, on old bindings, bronzework, and in architectural motifs.’ (p. 97). Furthermore, in acknowledging the assumed unlikeliness of this correspondence, Markov cites ‘a beautiful legend from Frobenius’s collection’ (p. 97) which again originates the artwork in an indigenous and archaic context. ‘Issa’, is the name given to a resented ruler, whose name corresponds to that of Jesus Christ in Northern Africa. With this, Markov realised:

‘how rich was their heritage… when my gaze encountered everywhere on both new and old things, the cross of Issa, Christ’s cross, the Byzantine cross… All this wealth lies in the country itself, as the genuine heritage of its own past.’ (Markov, p. 100)

France’s plush bourgeois theatres opened in the same splendour as that of the Theatre of Dionysus in Greece, both standing as the heights of entertainment of their time. One genre in particular, the ‘satyr play’ which would have been staged at the Theatre of Dionysus and in Athens during its festival season, merits some of the same qualities as that of France’s cherished Théâtre des Champs-Élysées of 1923 in which the premier for La Création du Monde took place. Both these capitals – Paris and Athens – were the locations for hosts of performances, the latter being where contests between plays would take place, the former being the epicentre and destination for the bourgeois, upper-middle class public. The ‘Satyr’ play was that of tragicomedy, a lewd satire in the form of a burlesque, and a genre evolved by Pratinas of Philius, c. 500 BC from the traditional dithyramb routine. A dictionary definition notes ‘a burlesque or ribald drama having a chorus of satyrs’ (Random House Dictionary, Random House Inc., 2016, www.dictionary.com/browse). But the relevance here is the nature of performance, which corresponds to Cendrars’ (responsible for the conception of the ballet’s narrative) appraisal for Börgin’s choreography for La Création du Monde, comparing it to that of

‘savages – and that’s what I admire about it most… you’ve discovered the rhythm, the beautiful rhythm of today, which opens five new continents to us: discipline, balance, health, strength, speed.’

The conventions framed upon Negro art in France may have, however, marred its true power and right to be celebrated. Its figures were staged as being generally provocative, erotic and sensual – representing the desirable, exotic woman. As yet another parallel, much of the festivities in ancient Greece were on behalf of Dionysus (Bacchus), god of wine, harvest, ritual exultation, and fertility. He is represented often accompanied by groups of women, crazed and intoxicated in revelry, and who were the culprits of the de-capitulations of innocent men. Such wildness and brutality committed by these Bacchae was both wondered at and feared, and the sexual promiscuity, which surrounded their role, as well as the often crude imagery of conniving satyrs, associated their activities with the loss of conscience into madness. Drunken, dazed, and devilish indulgence are some of the characteristics that perhaps might be attributed to the bachelors of upper-class Paris, seeking out their entertainments without inhibition or much moral conscience in going to gaze at women in shows, and later to their own impunity.

As such, what may be drawn from this comparison is the way in which we as audiences are too commonly entertained by the idea of escapism and revelry into unknown worlds. La Création du Monde reintroduced the hidden primitivism of indigenous Negro life and culture at a time when Western, supposedly ‘civilised’ Europe had unleashed the most destructive and cataclysmic event in the history of war. Whilst indulging in strangeness, and perhaps touching on the surreal or absurd, the ballet nevertheless contained a vision of a world anew – recreated and blossomed from disorder into fruitful new energies. Yet, the Ballet Suédois relented such crudities, and in their production in 1923 projected a brand new vision, albeit with technical issues regarding the overly-ambitious geometric costumes worn by the dancers…

Madness, the bizarre, the unexplored, and the brightly coloured horizons of these worlds – these were the themes which fuelled the creation of the performances and dramatic manifestations of ancient Greece’s Dionysian celebrations and the Ballet Suédois revolutionary show. That Dionysus himself was considered by the gods something of an ‘outsider’ and considered ‘foreignness’, leaves a lasting impression upon the comparison with the celebration of Negro Art in France: both ‘outsiders’ nonetheless enchanted their audiences and became something of a popular and pursued phenomenon in the public spheres of their time. They were highly inspirational to the arts of their time, as countless amounts of evidence and recognisably lasting evidence suggests. Although any form of a conclusion may be as lucid and mysterious as the subjects themselves, what is most striking (and, I will confess, was the initial stimulus for this piece), is that we have continued to be utterly captivated by alternative, wild realities to that of our own. However civilised or sophisticated we may conceive our creative powers or competences to be, there is always the capacity to unleash our instincts, to investigate and represent new things in new ways. Lastly, it encourages the idea that we are a united humanity, and despite widely different forms of representation and symbolism, it is seen here that the arts can remain a loyal and opportunistic medium for us to express and explore all of these impressions.